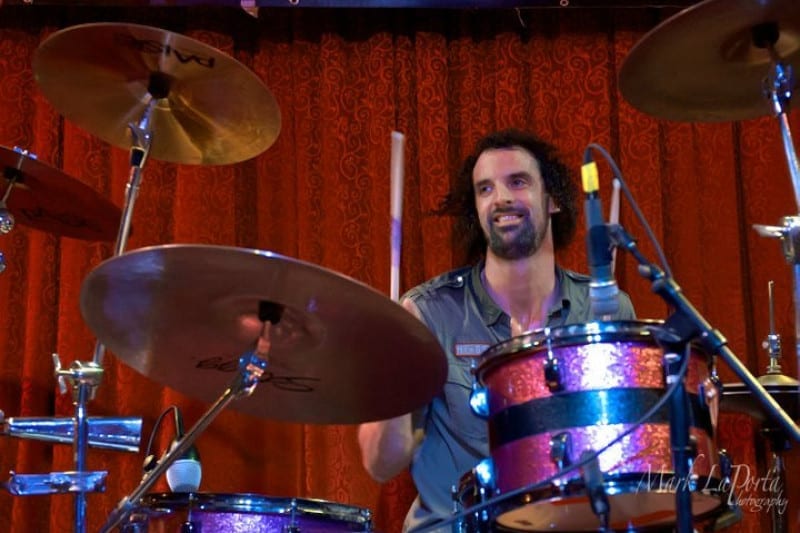 The name evokes the four-minute and five-second drum solo on Gregory Nash’s 2014 solo release, “Baby.” The CD was a project idea running through Nash’s head for a long time as he worked behind the drum kit for several bands. An idea David Rockower recalls him sharing as the two played for Toys in the Attic.

Through the years of working with Jeanne French, Sirsy, Ten Year Vamp, Addicted to Pain, Bump, and Area 51, Nash was recognized for his musicianship. “I was immediately struck by how much fun he had with the language of music itself,” said Rockower. “He would just drive the musicians around him in the band, and he really sets the bar very high.”

Nash shared his idea for “Baby” with Rockower a few times. Eventually, the two would work on it together. Nash would go to Rockower’s place and lay down tracks of him playing drums. Rockower would sit down with his guitar, and as Nash would hum out a harmony that was stuck in his head, he’d start strumming a few chords. “During the writing process, it was very clear that he has a strong gift as a lyricist, and he really has a strong vision of how a song should evolve,” he said.

Once “Baby” was completed, a CD-release party was thrown.

“The CD release party for his album was sold out,” said Rockower, “which was a wonderful testament to how many people in the community he had strong relationships with, how many musicians truly supported him.”

In an interview with The Spot 518’s Ali Hibbs, Sly Fox described Nash as a “pro drummer.”

“He’s a sweet guy and a great drummer,” said Fox. “He’s someone you could call and, if he didn’t already have a gig that night, he could just show up and not even know what songs were going to be played and just hit it off. His musical vocabulary is fantastic; he can play anything. He’s just a force to be reckoned with.”

“Grace Abandoned,” as a phrase by itself, is a cruel way to describe a stroke victim. It’s an attack on the brain, described by the federal Centers for Disease Control and Prevention as a blockage cuts off blood flow to the head. Every 40 seconds, someone in the U.S. has a stroke. Every four minutes, someone dies. Each year nearly 140,000 people die from stroke. One day last March, Nash woke for work and knew something was wrong.

“I was late for work, so they sent a co-worker to check on me at my house, but I do not remember this,” stated Nash through email. It’s still difficult for him to speak. “When I woke up for work, I could just tell that something was wrong.”

While getting ready, Nash recalled blacking out several times. Curiously, he could not move his right arm. He later found he was not able to speak. He remembers getting into his car to drive to work and hitting a parked car. Once he ultimately arrived to work, his co-workers assumed he had “fallen off the wagon,” though

Nash has been sober for 20 years. They sat him in the backroom where he proceeded to blackout again. “At this point I knew that I was having a stroke, but I did not want to admit it because I thought I was too young,” said the now 45-year-old. Hours later, Nash’s boss found him blacked out before bringing him to St. Peter’s Hospital. Once he was evaluated, Nash said, the doctors confirmed he had experienced a stroke, suffered a traumatic brain injury, and that he would never speak again.

The CDC reports that 795,000 people in the U.S. have a stroke each year. The majority of attacks, more than 600,000, are first attacks. Though Nash was only 44 at the time of his stroke, a relatively young age, the CDC states strokes can happen at anytime. In 2009, more than one-third of people hospitalized by stroke were younger than 65.

Nash’s path to recovery started at Sunnyview Rehabilitation Hospital in Schenectady. While there, he worked with Jonathan Brendese, a speech and language pathologist. With additional help from long-time friend Pat Battuello, Nash’s speech slowly returned. “It’s a very frustrating process, but I could not be here at all, so I am lucky for that,” stated Nash.

More than a year after his stroke, the drummer has control over his right arm again. Though he’s not able to sing “yet,” he’s able to get behind the drum kit again. His ability to play has been pushed back to a beginner’s level, he said. To reach this point in his development, it required “lots of patience and persistence” with hours of practice in the studio. Prophetically, the name of the last track from “Baby” describes Nash and the scene that will take place at The Hollow this Saturday: “My Resurrection.”

Last month he announced his intent to perform at The Hollow Bar + Kitchen, on Saturday, March 31, at 8 p.m.. He expressed his gratitude for Fox organizing the “Love for Nash” fundraiser last March. Now, he wants to pay it forward and help raise funds for Sunnyview. The night is billed as “One Stroke Roll – Benefit for Sunnyview Stroke Victims.” Toys in the Attic, Blase Debris, Stripped, Walpurgis and Maryanne are to perform. Proceeds from ticket sales and raffle go to Sunnyview Stroke Victims.Those who can’t make the show can send donations to www.givetosunnyview.org

“[What’s] most important to me is my drumming,” stated Nash. “I have no kids, no wife, no girlfriend. Playing drums is where I spiritually connect with an audience.”