TROY — For eight months out of the year, Joe Mele has things under control. It’s those other three months of the year when he feels tested.

Once Christmas is over, he said, he starts planning for what has become the biggest party in town. That’s usually when the questions start rolling in. People start asking what bands will be playing, and when it’s going to be. As the weeks draw closer those questions build along with the anticipation for the date. 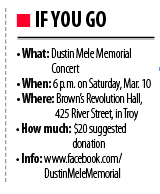 “The energy that I’m expending on with this kind of goes away,” said Joe, as he, his wife Jenn and daughter Lindsay work towards preparing for the The Dustin Mele Memorial Concert. This year, bands will include Soul Sky, Super 400 and Emerald City. The night is to also include a reunion of the The Burners UK original lineup, of which Joe will play guitar. But, “It’s kind of a double-edged sword,” he said.

“Yeah, I need to do this,” said Joe, “but it just brings up more people talking about it, and asking me about it. So, it’s 50 percent I feel great about doing this, and the other 50 percent it brings up all these feelings I try to control during those six to eight months of not doing this.” He said he’s toiled with the idea of not doing the concert. A feeling that lasts a few days, sometimes a few weeks. Maybe if the concert doesn’t go on, then people will stop talking about it, and if people will stop talking about it, maybe the feelings will go away. But, “The way I feel about it will always be there.”

According to the World Health Organization, over 300 million people suffer from depression globally. Less than half of those dealing with it receive any form of treatment. Depression is the leading cause of disability and at its worst — as was the case for Joe’s son, Dustin — it can lead to suicide. Nearly 800,000 people die due to suicide every year. Suicide is the second leading cause of death in 15- to 29-year-olds.

People dealing with mental illness or battling through thoughts of suicide can feel alone, said Jenn.

“We know how people feel, and they’re not alone in feeling thoughts of suicide or any other kind of mental illness,” she said. “It’s not something that’s unique to them. There are people who understand. There are people who are in their community who feel this way, and that there are programs out there that they can reach out to for support.”

Past concerts have been credited as top musical events, and have drawn more than 2,200 people. In total, the concerts have raised $24,500 to benefit the American Foundation for Suicide Prevention’s (AFSP) suicide awareness and prevention programs, making the Dustin Mele Memorial Concert one of its top fundraising teams in upstate New York.

“It’s just keeps us busy on the positive side,” said Joe. “To take this tragedy that wants to drag you down into depths you have no idea how deep it goes… and hope this money we raise is just going to help somebody. … It saved me. It will be five years ago this March. If I didn’t have this outlet, with the support of the musical community, and be able to do this concert and raise money in my son’s name, I don’t know what I would do.”

This year’s concert will feature 50/50 raffles and a Chinese Auction. Proceeds from the auction and raffle will benefit a cancer recovery fund for Dustin’s cousin, David Mele. David, who bears a striking resemblance to Dustin, was diagnosed with stage 2 cancer last February and has spent most of the year fighting an aggressive form of cancer.

For those unable to attend the concert but would still like to donate, visit http://afsp.donordrive.com/participant/DustinMele. Online donations will be donated to AFSP.

In Colonie: A high-speed chase, a crash, a search and a stolen handgun