Comedy webseries captures zany moments on screen; life for its stars is just as unconventional 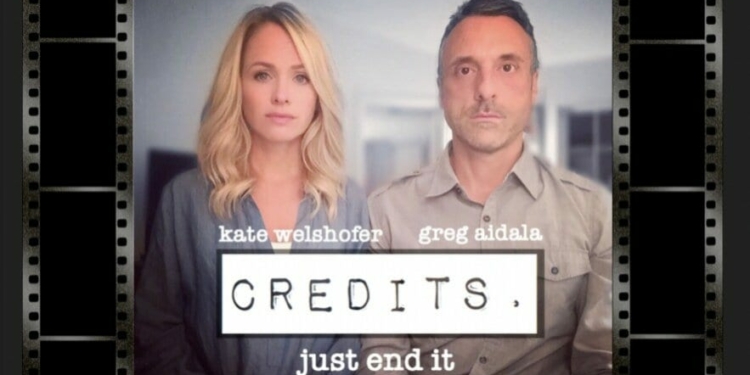 There is a thin line connecting a school of philosophy and a YouTube channel, but it’s there and lends credence to the law of attraction.

The law of attraction states positive thoughts will conjure favorable opportunities, as negative thoughts influence unwanted experience. No one knows who originated that belief, but it dates back well before Al Gore said he invented the internet. Before Justin Bieber discovered digital marketing. Before Greg Aidala picked up a telephone. And, before Kate Welshofer started cracking jokes in front of a webcam.

Last month, Welshofer announced to the Capital District she was leaving her anchor position at Spectrum News after nearly 11 years. She has moved on to take a role at an NBC affiliate in Buffalo. Ironically, she said, they knew nothing of her professional work. “Plain and simple—my YouTube channel got me this job,” she stated on Facebook.

If not for the positive outcome, the experience could have led to another episode of “Credits,” a web series she and Aidala launched last month. The comedy stitches together vignettes of socially awkward moments and cuts them at about the same time you’d ask, “What was that?”

She ultimately landed a job as a producer in Rochester after graduating from St. Bonaventure. But, even while launching her career, she said to herself, “I don’t belong here.” She liked news. She remembers when Walter Cronkite retired, “This Dan Rather character is just not cutting it for me.” And, she liked writing stories. So, when people asked her why she didn’t go into newspapers, she didn’t have an answer.

Her station’s videographers took her in and helped her to tell stories visually. She learned how to frame a story and draw viewers in though sight and sound without her necessarily being in front of the camera lens. In time, she had her own half-

hour segment on a newly developed 24-hour news program. She had a “rag tag” team that included an editor and a few videographers. In between segments, the team started filming spoof reports and comedy reels.

Aidala’s start in comedy began by calling a phone number from an ad in the back of Metroland in 2001. It was to audition before television comedian Colin Quinn to perform for a benefit show in Troy. The promotor asked for a video tape of his stand-up routine. That was a problem. Aidala never performed, let alone had a routine documented on tape. After weeks of calling to get a break, he ad libbed.

“I’ve only performed on Southwest and Amtrak and they don’t allow me to tape,” he said. After a long silence, the man on the other end of the line said, “I’ll call Colin and call you back in two days.” Aidala said he didn’t expect a return phone call, but as promised, he received a call back. “Colin said he’ll give you ten minutes, but you better be [pause] funny.” He was. After his audition, show organizers had him open the show before 400 people.

Since then, Aidala has toured the country with the likes of Jerry Seinfeld, Kathleen Madigan, Jackie ‘The Joke Man’ Martling and Charlie Murphy. In 2005 he formed Radial Gage Entertainment, his own entertainment company. His vocation has him working regularly between here and New York City.

“People say, ‘you look like a robot,’” said Welshofer, regarding how she appeared behind the Spectrum News anchor desk. “And, sometimes, I’ll own that criticism, because sometimes I’ll take a look at myself and I can tell you what time it is. That’s right before the dinner break. That’s right before I’m going home. Because, I’ve got that glazed-zombie-human look.”

Behind the scenes, her segments are taped and spliced together between news stories. She has no interaction with other on screen personalities. Nearly five years ago, out of frustration, Welshofer started “No Teleprompter, No Mercy” on YouTube. She started a comedy channel. Each week, over just a few minutes, she and her feline co-host Brian Williams talk about everyday stuff. Blind dates. Starbucks. Thanksgiving. Funny, off-center takes on stuff people are already talking about. It’s not unlike her day job, but there was one, definite difference. No robot.

“There are some people who didn’t realize I was the same person,” said Welshofer. “I’d have people say, ‘Oh! You’re a human. This is refreshing and good to know.’”

Aidala thought of credits with the help of his brother. The two were talking about a car commercial they each found annoying, and thought of a clever — yet, completely inappropriate — way to end it. Inappropriate, but funny, and it sparked the idea for “Credits.” To do it, he shot an email to Welshofer.

Their paths previously crossed through the Amazon Prime series “Welcome Home,” in which Aidala stars. Welshofer, who serendipitously shot a tweet about how much she enjoyed the series, received a response from Bobby Chase, the show’s creator. He offered an invite to play a reporter on the show. Both Welshofer and Aidala knew of each other, shared mutual friends, and ultimately started storyboarding before shooting comedy together. The end result was “Credits.”

The first episode of “Credits” premiered online last December. It’s left for interpretation, but it appears to be snip bits taken from the lifespan of one couple’s quirky relationship, including a short speed-dating scene.

Juxtaposed against the news anchor’s robot persona, it makes for a hilarious few seconds before going on to yet another funny clip.

Unrelated to their plans for the series, Welshofer interviewed and was offered a new job in Buffalo. She made her on-air announcement just a day after “Credits” debut. Despite the miles, Aidala said they plan to continue the series. Welshofer’s personal YouTube channel will remain in flux as she works out the details of her professional obligations in Buffalo. Nevertheless, the silly channel she initially made to blow off steam revealed a different side to the anchor woman. In the end, it created the opportunity to move off towards an endeavor she’s excited about. Her new general manager, who Welshofer said knew nothing of her credentials as a producer and news anchor, wanted someone who could tell a news story differently. As Welshofer explains the story, the general manager told her ‘I have a lot of people in my shop who can do news. I don’t have anybody who can do what you do.’

“To anyone not sure if they should do something weird, do it,” stated Welshofer on her Facebook page. “Not everybody’s going to get it but, when you least expect it, somebody will….and it will change your life.”