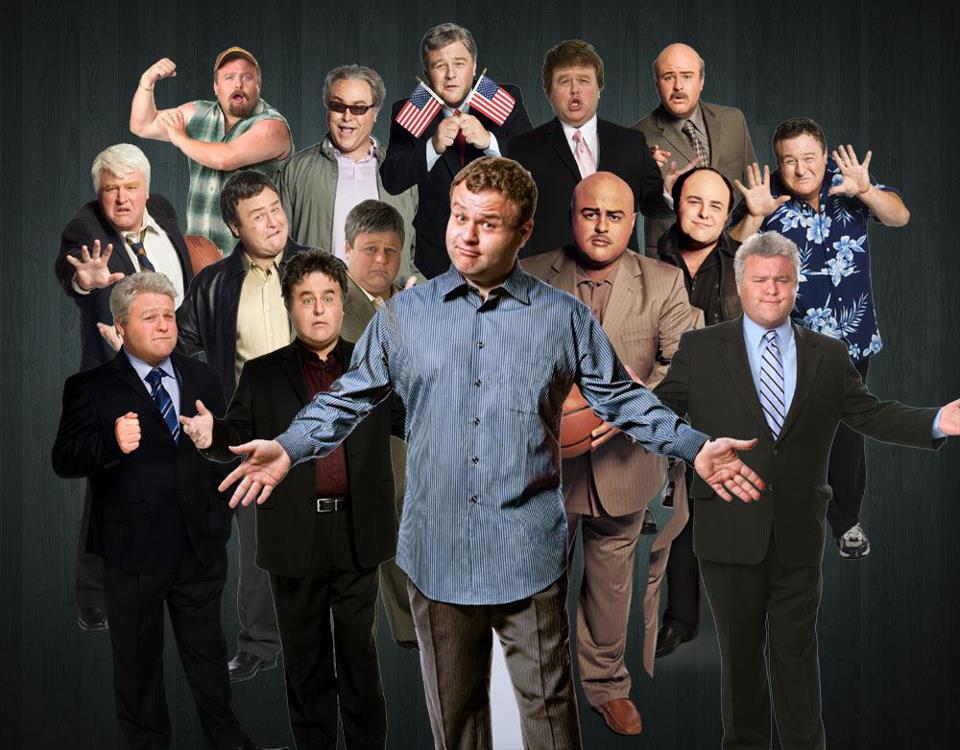 SCHENECTADY — While the name on the marquee reads “Frank Caliendo,” it’s not the name of the man people come to see.

The comedian has made a living portraying others for nearly 20 years. When he is on stage, people don’t see the husband, father or the once-aspiring broadcast journalist. They see John Madden. They hear Morgan Freeman. They are entertained by the dozens of impersonations witnessed countless of times on television and radio. If people were asked to describe Frank Caliendo, they would likely describe him as that guy on television who does impersonations. In turn, when Frank Caliendo is asked to describe himself, he calls himself something else.

“I don’t feel like I fit into show business so much,” said Caliendo, from his home in Arizona, where he lives with his wife and two children. He describes his typical day like that of any everyday father. He wakes the kids, and after ushering them off to school he proceeds with attending workshops and interviews. When his workday is over, he’s taxiing the kids to gymnastics and flag football. Despite the fame, he said he doesn’t fit in. He doesn’t offer to exchange phone numbers unless asked. He has the phone numbers to famous sports figures on his phone instead of A-list actors or fellow comedians. “I’m just a weirdo who does voices, I don’t know.”

That’s how people know Caliendo. He’s a sports guy. His father was a minor league baseball player. His brother pitched batting practice to Major League infielder and World Series champion Craig Counsell. He initially looked to follow in their footsteps, playing baseball as a catcher. He first earned his comedic chops doing impressions from Saturday Night Live, opposing players and sometimes the umpires — occasionally resulting in a few strikeouts.

Caliendo earned his first big break in the short-lived WB comedy series “Hype” in 2000. That’s when his John Madden impersonation earned him the attention of Jimmy Kimmel, who was then doing on-air predictions for Fox NFL Sunday. An invite to join Kimmel on-air would ultimately lead to the impersonator to take the place of the now-late night show host on Sundays. From there, Caliendo has developed a portfolio of voices and characters ranging from Charles Barkley to President Trump. For each, he said, there is a formula he follows.

“You create a character out of [the impersonation], so then you can do so much more with it,” said Caliendo. He credits Dana Carvey as the best example. The Saturday Night Live actor was perhaps most famous for his take on former President George H.W. Bush. Not only emulating the president’s voice, but copying his mannerisms and later spinning off a character full of habits he could take on to a new tangent. “The old Rich Little style, just giving that line, and joke after joke after joke. You can only bear with it for so long, but if you give the person a point of view, and go with that character’s point of view, it’s like that person is doing the stand-up themselves.”

The exception would be that of his impersonations of Morgan Freeman. Freeman’s propensity to narrate in films has been put to good use in some of Caliendo’s work. Using the voice of the man who once played God to recite LeBron James’ declaration to South Beach or to repeat one of President Donald Trump’s speeches, has elicited laughs from recent crowds.

“Morgan Freeman, as much as there’s a little bit of that take, you don’t create as much of a character with him because the voice is the whole thing,” said Caliendo.

One of Caliendo’s newest characters is a parody of President Trump. Each president is destined to be portrayed in comedy routines. Trump is no exception. Already, Alec Baldwin has established a new career of impersonating POTUS on Saturday Night Live. Caliendo, however, said he approaches the comedy from someplace else.

“My takes come from not being mean,” said Caliendo. “You don’t even have to agree with their politics, you don’t have to agree with anything about them. I find things in the way they talk — the ridiculousness that they can get away with. Alec Baldwin comes from pure hate with Trump, I think. And, I don’t enjoy his impression.” Caliendo said he avoids the specifics of politics because, “People have different belief systems, and I’m going to get in there and judge it in any way, shape or form.”

The guy who does John Madden impersonations said he is moving on. Caliendo is taking steps to transition to another phase of his career. His other impersonations are taking over. Just as he’s shedding the retired football coach out of his routine, the actor is losing his resemblance to the overweight coach — Caliendo has lost 50 pounds over the last two years. Now, he said, he’s starting to take his career on a similar path to one of his other impersonations, Robin Williams.

Though the comedian continues to tour, he said he is spending less time on comedy and more on acting. Each week, he attends three to four workshops to improve. “I’ve spent most of my career on the business side, I’m actually now working on the art side of it. Because, I’ve never worked on that.”

The kid out of Wisconsin, who feared he couldn’t hack interviewing people after earning a broadcast journalism degree, now wants to branch off into something different. Just as he aimed for a single appearance on late night television — shooting over his target into a successful career in television — Caliendo wants to appear in a play doing serious acting.

“I’ve also worked on non-impression characters, talk about me and family, which is where the next part of my career is going.” said Caliendo. Working on the acting side of stuff and being different than the guy who’s known for doing the John Madden impression. But, that’s kind of what a career is, right? You pigeonhole yourself for doing something to get known, then the second half of your career is trying to figure out how to get out of that pigeonhole you set yourself up with.”

Caliendo is to perform at the Rivers Casino & resort in Schenectady on Saturday, Dec. 30, at 8 p.m. For tickets and information, call (518) 346-6204 or visit www.frankcaliendo.com.

The new ‘Summit’ goes before the board