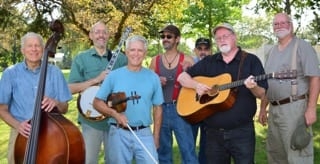 Question 1: For those not familiar with Three Quarter North, how would you describe your sound?

The band’s six veteran musicians bring together many genres to create our sound. We play Americana, with an emphasis on bluegrass, originals, folk, country, blues, acoustic rock and pop standards. Two fine songwriters in the group (Dave Rhodes and Mark Smith), add their unique talents to the mix. It has taken over 10 years to develop the sound of Three Quarter North. We began as a trio with Dave Rhodes and Roger Allen on guitar plus Dan Johnson on mandolin so that’s the “Three” part. The “Quarter” part represents the amount of pay we brought in at the beginning. As to the “North” part, that represents the direction the band is pledged to take. No side slipping No falling back. No going South. Forever upward. Forever North.

Question 2: Who has influenced your music over the years?

We like anything that doesn’t sound like Pete’s record collection. We started out playing folk music and expanded to bluegrass, Beatles and beyond. We like songs that have an engaging melody and thoughtful lyrics. However, we have been known to play “Hot Tub of Tears” and “We’ve Seen Crappy Times Before.”  We draw the line at “Girl Crush.” Three originals on our latest CD, “Back Home,” are finalists in the JP Folks International Songwriting Competition.

Question 3: Not many people have the same opportunity you have to play in front of a live audience, can you describe that experience?

We prefer to play in front of a live audience. I don’t think we’d like the other kind. It’s fun to perform for our friends and doesn’t take long for our audience to become our new friends.

Question 4: The local music scene has been compared to some of the best in the country, iconic locations like Austin and Red Rocks. What can you share about our musical landscape?

We are truly a local band. We started in Delmar and have never traveled far from the Capital District. We have appeared at almost 50 venues within 1.5 hours of Albany. We have played at small venues like Cafe Lena in Saratoga, and large outdoor venues like Clifton Commons in Colonie and Canal Square in Cohoes. We’re rootsy enough for bars and classy enough for the Troy Bank Music Hall (where we’ll be appearing in March, 2018). We couldn’t ask for a more vibrant and varied music scene than here in the capital district. We enjoy great support from local radio as well. Our latest single, “Some Rivers,” has enjoyed extensive air play on WEXT, FM 97.7.

SPOTTED: The Scotties eliminate The Eagles in straight sets