“Let It Rock! A Tribute to Chuck Berry” at the Hangar in Troy

by Spotlight News
in Music, The Spot
0 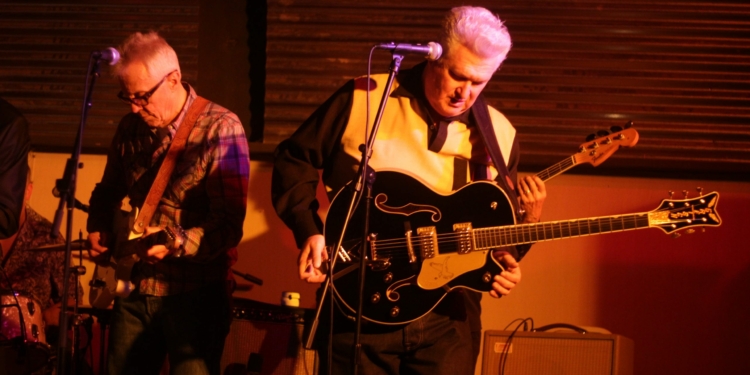 Although it has been seven months since Berry’s passing, his legacy remains alive in the heart, music and soul of a team of local musicians who joined forces to pay an amazing tribute to their hero at The Hangar on the Hudson in Troy on Friday, Oct. 20.

Graham Tichy strummed and sang along to Berry’s tune, “Maybelline,” captivating audience members and dancers alike from the start. Rabb got the dancers swinging along to the rocking rhythms of his rendition of “Carol.” “Almost Grown,” made Graham reminisce on how Johnny Johnson, Berry’s pianist, performed jaw-dropping melodic, bluesy piano solos while making a reference to local pianist, Kelley, who performed alongside the band.  A magical moment came towards the end of the first set as the band began performing “Run Rudolph Run,” to get an early jump into the Christmas Spirit. Add into the mix a dance-off dedication to Berry, as Tichy and Gamsjager kicked their feet and danced towards each other while playing guitar solos during the song’s instrumental. It was a touching moment and homage to Berry, as he was known for dancing along to his own music during a live performance. Although it’s only two months until Christmas, the audience didn’t seem to mind at all that Christmas music was being played at the Hangar.

Hearing these historic songs was not only entertaining but also educational as each performer took turns to discuss the musical history of Berry’s success with his hits and what went into making his songs timeless.  Other musical references were made in “Come On” in learning how Etta James performed backing vocals to the tune as well as “Talkin’ Bout You” in which The Beatles not only covered their tune but also stole the rhythm that is heard in their song, “I Saw Her Standing There.” Later on in the Beatles career, the group was sued by Berry due to the similar musical arrangement that was used in the line, “Here Come old flattop,” from the song, “Come Together,” was stolen from Berry’s tune, “You Can’t Catch Me.” John Lennon and the remaining Beatles ended up losing their lawsuit against Berry.

“Let It Rock” kicked off the band’s entertaining and danceable second set. Led and sung by Gamsjager, dancers continued to sway and move along to the Spanish, Cuban flair of the rhythms and ringing of the guitar and piano in “Havana Moon.” A cover of “Thirty Days” followed suit. Rabb had called up long-time friend and local musician, Harrison (guitar/vocals), to join the band on stage to lead the signing and performing of “Sweet Little Sixteen” and later segue into playing “Nadine” with Tichy on main vocals. It was a sweet moment to be able to watch Harrison perform on stage with his friends for one last moment as he’s planning to moving south to Florida. “Beautiful Delilah” allowed Graham to re-captivate Berry’s signature move of dancing along to the music during a live performance while performing an electrifying solo.

Closing out the second set were Berry’s other tunes, “Wee Wee Hours,” “Promised Land,” “Reelin And Rockin’,” “School Days,” “House of Blue Lights,” “You Can’t Catch Me,” “Little Queenie,” “Roll Over Beethoven,” and ending the event with one of the most quintessential songs of the last century, according to the band,  “Johnny B. Goode.”

“Let It Rock! A Tribute to Chuck Berry,” left its fans (and musicians) satisfied while partaking in a special, local, musical moment in time honoring the life and musical achievements of the pioneer of rock and roll, Chuck Berry. Rock and roll, rockabilly and the blues have all made a place in general music! If it wasn’t for pioneers such as Berry and the local musicians that have continued to keep these musical styles alive and kicking for years to come, popular music wouldn’t be where it is today.

NIGHT and DAY: Fun Home and The Fleshtones

Pros, cons of voting for a constitutional convention