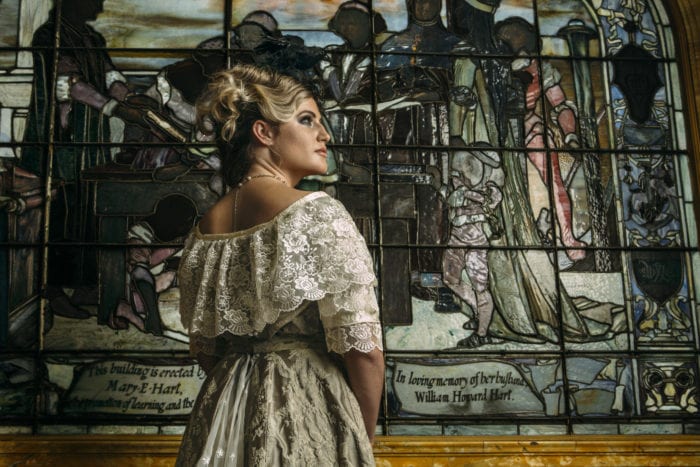 TROY — The annual steampunk festival kicks off its fourth year next month with an enchanted ball, a new riverside park fair setting, and a floating pirate party on the Hudson River.

“The Enchanted City is making the most of our Hudson River setting this year with the addition of a steampunk pirate riverboat and steam-powered set pieces at our Riverfront Park,” said Enchanted City creator Susan Dunckel. “Dutch Apple Cruises will supply a floating bar, stage and facilities throughout the day and then will set sail with us in the evening for our festival after party.”

“The Enchanted City IV, Deus Ex Machina – A Steampunk Fair” will be at Riverfront Park in downtown Troy on Saturday Sept. 16, from 11 a.m. to 5 p.m.  The free festival of steampunk fashion, fantasy and fabrications draws more than 5,000 participants and offers a family-friendly inspired day of music, games, performance, food and fantasy. Special events include an opening parade of Mad Machinery, a costume contest, street performers and peddlers, storytelling, dancing, puppet shows, magic acts and more.

Adults and children are encouraged to come dressed in steampunk-themed costumes or as fairies to take part in the spectacle that will magically transform a waterfront park in historic downtown Troy into a “cosplay” alternative reality where Victorian fancy meets modern technology.

Although definitions vary slightly, “steampunk” is a genre of science fiction/fantasy that takes place in an alternative 1800s setting in which modern technology like robotics and air travel are powered by Victorian style and sensibilities. It is an alternative “futuristic past.”

The word steampunk was coined by novelist K. W. Jeter, author of “Morlock Night,” a 1979 spinoff to “The Time Machine,” by H.G. Wells.

The Enchanted City comes to life with a signature gala event on Friday, Sept. 15, at 7 p.m.

The gala will be held in the Tech Valley Center of Gravity Ball Room, located in the historic Quackenbush Building at 33 3rd Street in the heart of downtown Troy. (Fifty percent of profits raised will be donated to nonprofit Tech Valley Center of Gravity Community Outreach Fund to create open community programs, provide financial assistance with membership for community members demonstrating need, and provide open STEAM programming in the ThinQubator.)

“So many people ask me ‘What is steampunk all about?’ So this year I’m bringing in the professionals to answer that question,” Dunckel said. “People are really fascinated by this world. They’re curious and they really want to learn as much as they can.”

On the eve of the festival, there will “A Bewitching Ball Gala Event” from 7 p.m. to 11:59 p.m.  During the gala, Grymm Studios will provide walk around creatures that are a mixture of creature suit and puppetry. The creatures will interact with guests and have full sound and lighting effects to add to the performance. One of the creatures is a steampunk scarecrow called “The Harvester.”

“Joey Marsocci is a master costume maker. These are full scale suits, they’re at the level you would find in movies — he does that quality of work,” Dunckel said. “Some of these are really freaky, pretty scary and lots of fun.”

Though he has designed in many styles, Marsocci said he prefers the darker, grittier side of steampunk that more closely reflects the writings of Mary Shelley and Edgar Allan Poe rather than H.G. Wells.  His contemporary influences include the work and designs of film director, screenwriter and novelist Guillermo Del Toro, and fantasy illustrator Brian Froud.

“Everything I build or design has a story to it,” Marsocci said. “My designs also always incorporate the war between organic materials versus machines as I believe it is a constant struggle in each of us especially in our present state of technology.”

The gala ends at the stroke of midnight, the moment when the City of Troy becomes enchanted by the festival figurehead, Queen Mab.

Tickets to the gala are $100 and can be purchased online at https://enchantedcity.ticketspice.com/the-enchanted-city-2017.

HEALTH and FITNESS: You only live once