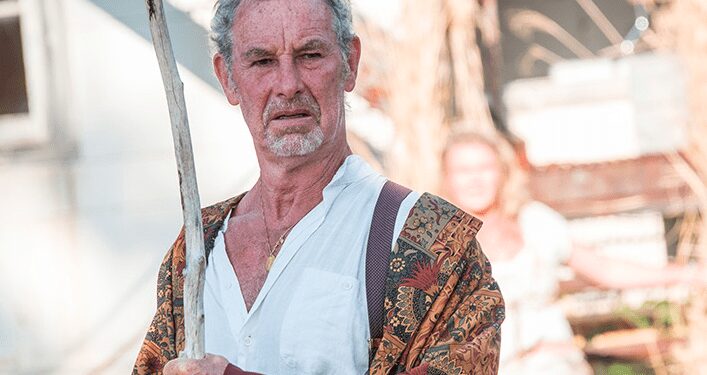 Bone colored walls two stories tall frame the north of the Roman Garden Theatre. Trees, bushes, white sails, triangular sun covers, rope coils or ladders, one rustic Gothic arch made of dark branches, and clusters of bulrushes surround the audience. Wooden ramps or platforms, like the foundations of simple tree houses, rest behind the four sections of audiences sitting in neat rows of metal benches or metal and canvas folding chairs closer to the slightly raised stage, which separates those sitting in the east from west, and the north from south sections; the audiences see each other across the center stage, so that the audiences’ reactions will also be part of the background just as they are during the pre-show scene setting.

Vaguely Celtic sea ditties and folk ballads play in the air above us. A light breeze caresses the trees, bulrushes, and loose strands of hair. The scent of Citronella and Deet hang heavy. The show has begun before the first words are spoken.

Perfect play, perfect place, perfect production: Shakespeare’s final play makes for the ideal inaugural offering in Shakespeare & Company’s newly created “Roman Garden Theatre,” nestled between the Tina Packer Playhouse and Rose Footprint Tent. The Roman Garden Theatre makes the audience part of the scenery and an essential part of the action: the actor-audience relationship is at the heart of S&Co’s aesthetic, and new Artistic Director Allyn Burrows’s pumps life into this new outdoor stage — with lighting by God. The Tempest is an auspicious vessel for this new venture.

Full of supernatural characters, perilous voyages, a magical island with more features than Australia (yet an undiscovered country), betrayals, attempted murders, disguises, love at first sight, and clowns who would be killers, Shakespeare’s The Tempest has a career’s worth of plots, characters, and themes crammed into his second shortest play (The Comedy of Errors, considered to be his first play, is the shortest). The antithesis is significant. Co-founder of the Royal Shakespeare Company and Emeritus Artistic Director John Barton states antithesis (balanced opposites) is the key device to understand Shakespeare (an iamb is an antithesis after all) and both The Tempest and S&Co’s first production of it in its new theatre abound in antitheses.

Burrows has gathered a talented cast of nine fresh from S&Co’s founder and Emeritus Artistic Director Tina Packer’s Cymbeline and the experience enriches The Tempest. While the cuts of lines and characters (no loyal counselor Gonzalo, though some of his lines are bizarrely assigned to the murderous and skeevy Antonio) and doubling (King Alonso and his butler Stephano; if doubling can be done for the king, why not for the bedrock of a loyal counselor?) seem arbitrary, the actors are so assured, present, and engaging that this Tempest seems to materialize out of our collective imaginations to play out in front of the eyes watching on all sides. The staging with the audience as visible and as much a part of the performances as the actors creates connections not usually explored (The Tempest at St. Anne’s Warehouse early this year also took place on a stage where the audiences sat facing each other, but the aesthetic there was to focus exclusively on hermetically sealed characters in isolation, for example).

Here the redoubtable Nigel Gore strips the magic, melancholy, and madness of the wizard Prospero bent on revenge and focuses on the father protecting his daughter, Miranda (the revelation Ella Loudon). Gore’s Prospero is more common man, stripped of poetry but full of prose, dealing with unruly humans and servants rather than the master of the mystic arts struggling also with his psyche: “the rarer action is in virtue than in vengeance” is a common sense axiom for Gore’s Prospero rather than an epiphany wrung from experiences. The clownish servants Caliban (another believable performance by Jason Asprey), Trinculo (a peerless Bella Merlin), and Stephano (Josh Aaaron McCabe) get the laughs, but unlike many Tempests, they don’t steal the show. All three are fine and funny, wringing the laughs out of their frippery.

Uniquely it is the Miranda (Loudon) and Prince Ferdinand (Deaon Griffin-Pressley) who do steal the show, becoming the heart of this Tempest. Usually lost in ingenue haze due to the multi-faceted fires of Prospero and Ariel or easily accessible clowning of Caliban, Triculo, Stephano, Loudon and Griffin-Pressley create a Miranda and a Ferdinand who are believable (and thus engaging) as young lovers, developing their relationship so that it stands distinct in the play. There’s humanity in their humor. Loudon’s Miranda is the first I can remember as being a worthy daughter of Prospero; she plays Miranda’s anger in seeing the tempest drown the ship and crew in the play’s first scene, and her strength is a match for her father’s. Loudon’s Miranda is full of fire and vinegar, a worthy off-spring of the artful Duke of Milan. She has the face of a delicate china doll but the vocal force of a teamster stevedore. It’s a rare Tempest that is stolen by the Miranda and the Ferdinand, but S&Co’s The Tempest is such a wonder.

A seldom commented on pleasure at Shakespeare & Company is seeing a new generation rise while the stout hearts of generations past, like the inestimable Jonathan Croy and the stellar Kevin G. Coleman, sit rapt in the audience as young talents playing Miranda and Ferdinand bloom. Loudon and Griffin-Pressley (whose versatility reminds me of a young John Douglas-Thompson, lauded in the NYT as “one of the most compelling classical stage actors of his generation,” whom I first saw star in S&Co’s Cymbeline as Posthumus, a role Griffin-Pressley just played) who entrance and beguile here, and this August production in the Roman Garden Theatre heralds new beginnings at Shakespeare & Company even as it echoes old glories from the Mainstage at The Mount.

NIGHT and DAY: Rock the Dock and Travers Day