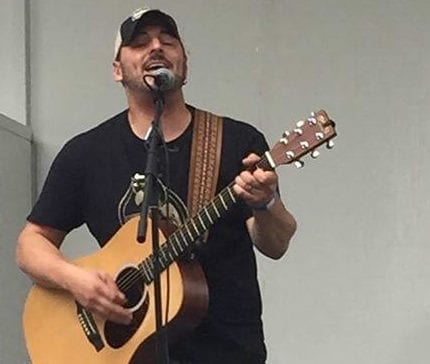 ALBANY — Have you had a taste of what Josh Casano can cook?

Standing in front of an audience, the man loops an elaborate arrangement of ingredients, all with the use of his voice, his guitar and a delay unit at his feet.

The chef-turned-musician ran a few kitchens in his time before the life changing events of meeting his wife, Sarah, and the eventual discussion of starting a family. Suddenly, aspirations of becoming the next Ric Orlando reduced over the flame of wanting to be a family man.

On his Facebook page, the music man’s vita reads: Husband, Father, Brother, Friend, Musician. Like a recipe, he starts with the base of the dish, and along the way, adds the spice. What’s first is vital: Being the husband, the father. And, what’s added next is the flourish that makes Casano’s life unique. His own. What’s missing from the list is his former life as a chef, and a clearer definition of his present day job as a high school music teacher. All those details are found further down his page.

“I know a lot of people who are head chefs, executive chefs, especially those who have started their own businesses. When you do it in the very beginning, it is really hard to be away from the business,” said Casano. “So, I went back to school to teach.”

The 39-year-old Casano got a late start to his current career path, which involves folding musical compositions into the minds of young students by day, splashed with stealing hours away to earn his master’s degree at the University at Albany, and a sprinkle of a few live gigs throughout the Capital District. Casano can still cook up a good meal at home, but he said he walked away from the culinary arts because — would you believe it? — the hours would be more demanding on him. The prospect of trying to start up a restaurant included hours of investing in the kitchen, taking him away from a family life he and his wife had only discussed. Today, the Casano start-up has flourished into a marriage with two kids and a home in Latham.

Casano enrolled into the College of Saint Rose’s prestigious music program. There, he quickly earned his bachelor’s degree to teach. Last year was his first, full year as a music teacher at Schenectady Public Schools. Though he’s just getting started with a career in music, music has been with him since his parents pushed the piano on him in elementary school. When he protested and asked to play drums instead, they bought him a trumpet.

“[Drums] were too loud,” said Casano. “They were aware of practice pads. My father thought to play drums I had to have a kit.” So, the trumpet stayed with Casano throughout his high school career. Once he started learning music on his own, “I started kicking myself for not paying attention to those piano lessons.”

Though Casano is often playing covers at his live shows, he is trained and practiced as a classical guitar player and songwriter, writing both the music and lyrics. Pay attention, and you may recognize a few of his songs as they have played on both 102.7 WEQX and 97.7 WEXT. The pressure of playing solo acts in front of an audience is akin to running a kitchen, said Casano. In both cases, he said, you’re “in the weeds” and focused on your task besides the commotion surrounding him.

“It’s nerve-wracking,” said Casano, about looping at live shows. “It was awful [starting out]. I’d practice a whole movement, get confident, and get up on stage to play it, ‘Oh, man. Please don’t screw this up.’ … You just learn to go with it. I’ve done theatre. I’ve performed in orchestra and band. You make a mistake, you just keep going. You just play it off like you meant it and keep going, and no one’s the wiser.”

You can find Casano playing Friday, Aug. 25 at the Saratoga Performing Arts Center, at 5 p.m. and at the Dana Park Concert Series in Albany, on Monday, Aug 28, at 5:30 p.m.