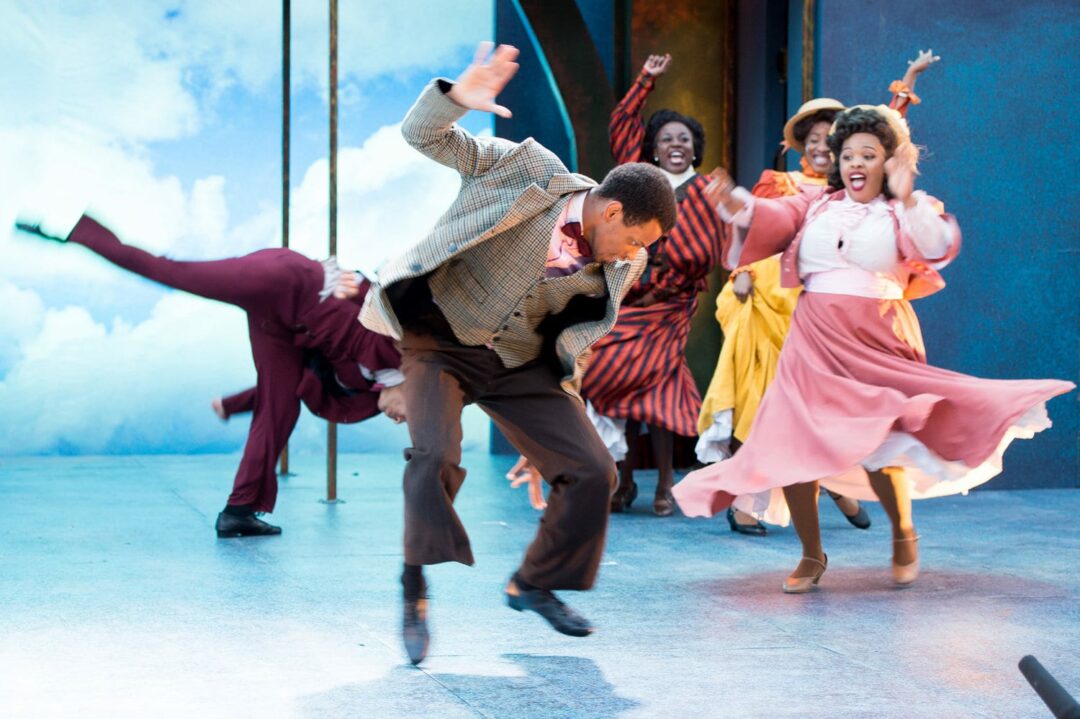 A scene from Ragtime (Photo via Park Playhouse website)

ALBANY — Summertime is “Ragtime” this summer. Two distinct but thrilling productions of this 1998 Tony Award winning musical were produced locally, a rarity for any non-Shakespearean play. No mere coincidence, the duel productions, one indoors created by the area’s finest professional theatre company ( Barrington Stage Company) while the other done outdoors by the still resurgent community theater troupe Park Playhouse, highlight the relevance and power of of “Ragtime.”

Set over a 100 years ago at the turn of the 20th century, this musical about the American Dream as it dashes across distinct classes, races, religions, and genders shows what America has been, is, and engenders a hope of what American could become. Such was the power of each disparate theatre group’s production that audiences at both erupted in applause at the act one closer, “Till We Reach That Day,” and leapt to their feet at the conclusion of the stirring reprise of “Wheels of a Dream.” The rarity of two simultaneous productions of the same musical underscored “Ragtime”’s rarest achievement: an essentially sentimental musical that still resonates today.

A fictional account using some historical (J.P. Morgan and Henry Ford, Emma Goldman and Evelyn Nesbit, Booker T. Washington and Harry Houdini) figures, “Ragtime” at Barrington Stage Company’s more intimate Boyd-Quinson Mainstage consistently found both the heart and soul of the musical. Featuring the more evocative and effective set——a symbolic child’s Victorian dollhouse stayed just left of upstage center, visible like the scattered baggage, boxes, carriers, against the three story brick wall of the company’s 105 year old reclaimed theater; the aged red bricks took on shifting symbolic meaning as Chris Lee’s lighting design changed hue, intensity, and angle——BSC’s production caught fire under director Joe Calarco’s brave vision. Though Coalhouse Walker, Jr. (a protean Darnell Abraham) is the soul of any “Ragtime”, Calcarco’s production took heart from the equally excellent Elizabeth Stanley as Mother and from her son, Little Boy (a believable Elliot Trainor in a role where it is no mean feat to be believable): Stanley answered Mother’s own question in “What Kind of Woman” and shared the ache in “Back to Before.” The uniformly better acted of the two productions, BSC’s “Ragtime” also shared the shows heart and soul.

Park Playhouse’s “Ragtime” had the better Model T, a key set piece, and featured without compare, the most moving musical movement of the two productions: “Till We Reach That Day,” an anthem for this moment in our country’s history. Sung at its climax by the full cast under the brilliant direction of Brian Axford, it underscored why “Ragtime” was the finest musical moment in Park Playhouse’s 29 year history. While too often some of PPH’s cast too often treated scenes as just words between songs—as if the old saw that “acting doesn’t matter in a musical” were true by singing and looking so far over the audience right in front of them as if they were singing to Whiteface Mountain some 145 miles to the north—-during Sarah’s Friend (Antonia Brown) lament all matched the focus and commitment of A.D. Weaver’s Coalhouse Walker, Mariah Lyttle’s Sarah, Brandon Jones’s Booker T. Washington and the uncredited members of Walker’s “Ragtime” denizens of Harlem. When they sang “Give the people/A day of peace./A day of pride./A day of justice/We have been denied./Let the new day dawn,/Oh, Lord, I pray/We’ll never get to heaven/Till we reach that day,” the notes and words resonated in the Albany night air and shone there brightly as the audience simultaneously wiped tears away and applauded.

On March, 3 2003, people gathered together in their communities around the world to simultaneously perform the ancient pro-peace play, “Lysistrata.” A day where communities nationwide perform ““Ragtime”” would be a fitting start to reach that day when the crimes at the heart of the musical are history, not breaking news.