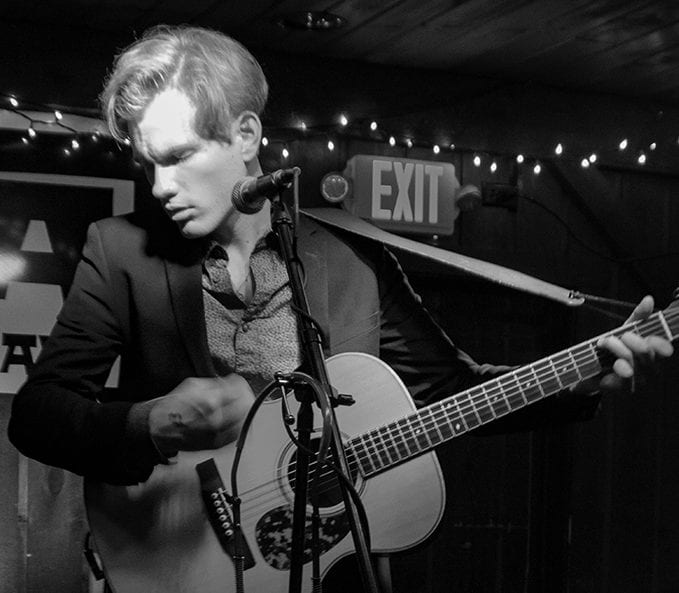 ALBANY — Curtis “C.K.” Flach — pronounced flack — has a look and sound to him that clashes with today’s world. But, when he opens his mouth, people listen.

The 25-year-old Coeymans Hollow native often takes to the stage dressed one necktie away from a job interview, with a clean white shirt and sports jacket, topped with a whimsical head of hair reminiscent of a flamboyant Jerry Lee Lewis.

But, flamboyant, he is not. Though people may want to mispronounce his name as flash, there is little flashy about Flach, but the self-described “quiet kid” commands the stage like a master craftsman at work in the backwoods, strumming his guitar and sharing stories of struggle through a voice others have compared with the late Lou Reed.

The association with Reed is no mistake. As Flach started listening to music as a musician, he came across Reed’s “Walk on the Wild Side,” and thought he could learn how to develop his vocal range through the late artist. “I felt I could learn a lot about what to do vocally by listening to him,” he said. “Then I found that I really, really like his writing style, how bold it was, and just went from there.”

Reed’s music was often described as avant garde. Credited as one of the pioneers to the punk rock genre that started in the late ‘60s. A rebel renowned by music lovers of today, but woefully underappreciated by critics of today. Upon his death in 2013, Rolling Stone magazine apologetically held vigil by tweeting and reporting about his every last moment. But, in the past, the magazine was one of his harshest critics. So goes Reed’s style and polarizing persona. For the deadpan singer sharing stories about drug addicts and social misfits, there was no middle ground. People either loved him or hated him.

“He’s a tough guy rebel. He’s the godfather of punk rock. You listen to him talk, he’s got that New York accent. He’s got a toothpick in his mouth while he’s playing on stage. Yeah. A real rebel. I don’t see myself like that at all.

I’m quiet, to be honest with you. I don’t really stand out like that. I’m a pretty nice guy, I think. And, really shy at times as a kid. It’s amazing that I get up on stage and sing in front of people.

Flach was born and raised on a steady diet of classic rock. He started drumming when he was ten. He only learned to play a few chords on the guitar when he was a teenager. By 2012, he was out of high school and in a band he started with his brother, called “The Kindness.” Then he started to songsmith.

As a songwriter, Flach said he draws inspiration from what is around him: the landscape, lifestyle and people here in the Hudson Valley. Flach started singing and writing for “The Kindness,” which released an EP in 2015. That immediately took Flach to a solo project that produced “Empty Mansions” in 2016.

Flach prefers to describe himself as a songsmith, because he sees himself more as a craftsman that is considering all aspects of music and not only the lyrics. Standing front and center on stage, he is wrapped in layers of song structure, lyrics, tone, and delivery. The placement of the bridge. Where to start the chorus. How does it relate to the previous song.

“It’s important to think all of those things through,” said Flach. “I think the difference between writers and craftsman is that [a songsmith] thinks of all the angles, and tries to approach it as a total project and not just song. … I like that term “smith” because it makes me feel like a craftsman. That’s important to me.

Flach began writing songs that spoke of social strife — politics, racism, division and corruption — and stories of love, loss, heartache and salvation. He said he was heavily inspired by Reed’s critically acclaimed album “Berlin,” which does the same. Stories, he said, that come through the “eyes of empathy.”

“It’s an interesting world we live in,” said Flach, who said he doesn’t feel today’s pop music speaks to today’s problems — drug addiction, financial struggles and Washington politics. Though, he said, music is often an escape for some people, “but I also know there’s a place for songs to be realistic,” he said. “Sometimes things happen that we prefer didn’t. I think having a song or two about it wouldn’t be the worst thing in the world. It might be comforting at times to have that relatable song that we can go to that helps us square up with reality and be aware of what’s going on around us. Another part of it comes through the eyes of empathy. Because, there are people out there who are struggling, and go through different things than we do. They may not have a use for a poppy song. It doesn’t really reflect their life at the moment, and I hope that anything that happens to someone, that’s not quite ideal, is temporary. Maybe in that moment, they could use a song or two that speaks from where they are coming from. … That place of empathy is where I’m coming from.”

Flach said opportunities have presented themselves to him since the release of “Empty Mansions.” Aside from opening this year’s MOVE Music Festival with a sold out show at Cohoes Music Hall, people have approached him about collaborating. Though he is currently writing for another release, no timetable is set for a second album just yet. He plays next at the Dana Park free concert series on Monday, Aug. 7, with Let Go Daylight and Two Guys in Albany.