ART REVIEW: Artist invites people of the digital world to “slow down and look deeply” 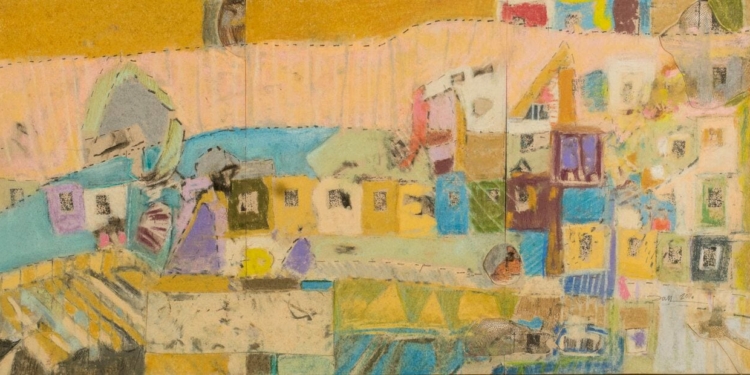 DELMAR — Artist Joan Oliver describes her work as “the blurred landscape of dream or memory.” Viewers can enter these dreamscapes at Oliver’s exhibition “Landlocked: Among the Many” on view at the Bethlehem Public Library until June 30.

Born and raised in the Capital District, Oliver has been exhibiting in juried and group shows in the region for the last 18 years, and her training and residencies have taken her to locales ranging from Provincetown to Estonia.

Oliver’s innovative take on the previous century’s modernist legacy evokes the rich color and textures of Swiss modernist Paul Klee but with her own distinct geometry, fluidity, and swirling movement. In Oliver’s “Intersecting Grace (2017)” a line of red bricks recalling the pure geometric forms of early 20th century painter Kazimir Malevich cascades in an arc amidst elastic blue and yellow triangles whose aerial dances are tempered by heavier darker forms below anchoring the composition. In the colorful patterning of the aptly titled “Kaleidoscopic Paper (2014), “she seamlessly combines modernist traditions and the aesthetic of quilting.

Lively, animated works appear throughout the exhibition paying homage to the automatist processes of Surrealist abstraction. In “Color of Place, Haapsalu, Estonia (2015)” and “On the Line (2015)” graphite lines freely dance over Oliver’s fields of color which interlock and structure the flat compositions.

However, Oliver’s most moving works consist of dark, atmospheric spaces,

as in the mystical realm of “Coronation (2016).” Large gestural forms materialize against the murky background and slowly process downward like a prophet descending a mountain while pastel bursts of yellow gold, pale green and blue alight like joyous fires in the distance as they emerge from behind free flowing lines. A charcoal circle, the largest shape in the composition, pushes into the foreground calling to mind both a Zen Buddhist ensō, a symbol of both emptiness and nowness, and the early 20th century expressionist Wassily Kandinsky’s belief that the circle is the most spiritual of all shapes—a concept shared by many world religions since it has no beginning and no end.

The mournful and masterful diptych “Classroom Exercise (2013)” suggests a haunting landscape. Upside-down numbers inscribed in graphite are strung across the sparse terrain like a barbed-wire fence. Turbulent black cloudlike forms bring to mind the apocalyptic sky of 19th century Romantic painter J.M.W. Turner’s fearsome blizzard in “Hannibal Crossing the Alps” as well as the somber mood of contemporary German expressionist Anselm Kiefer’s desolate landscapes. Red dots in configurations of four glow through the gray and white clouds of smoke, simultaneously beacons of life and harbingers of danger.

Works like “Wing of Departure (2017)” prove Oliver is equally at home working in oil-based media. Layers of glazes and washes pool on the surface of the Mylar, a white polyester film Oliver uses as her paper. Overlapping, they blur to create ambiguous, dreamlike spaces filled with sensual rich greens, purples, and oranges.

Oliver’s work is strikingly tactile—at times she handles her medium like a sculptor scratching and cutting the surfaces of her drawings. This physicality culminates in collages such as “Keeping Vigil (2017),” composed of black and gray squares, many containing volumetric images, and a white grid produced by the negative space between them. The work wittily resonates with the look of the results page of a Google Image search. In a delightfully unexpected break with the grid’s regularity, Oliver places one gray vertical bar down the middle-right of the composition, perhaps an homage to one of her influences American artist Anne Ryan who similarly disrupted her underlying structures.

Oliver’s work, while informed by 20th century abstraction, responds to today’s visual culture. In an age of speedy swiping and scrolling in the virtual world, visitors to the Bethlehem Public Library’s first exhibition of abstract art will find respite in the physicality and small scale of Oliver’s drawings which invite the viewer to slow down and look deeply.

Robert R. Shane is Associate Professor of Art History at the College of Saint Rose and regularly writes for Phaidon Press, London.