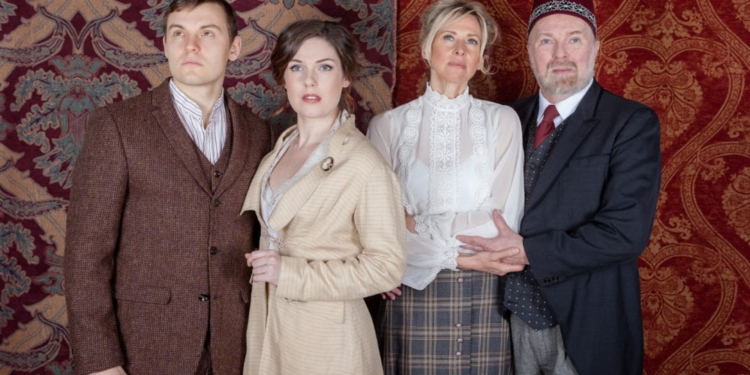 The stagecraft is subtle and smart. Grey and black predominate. The center raised platform crafted with the stairs as the sides is grey and black; the shutters on the upstage projection screen wall are black, and the silhouettes and shadows of people are dark grey and black. Two steel grey suitcases are downstage left. The streetlights dimly cast black shadows on the grey and black checkerboard stage floor. A grey mist seems to constantly hovering in the air. Scenic designer Brian Prather and lighting designer Cory Pattak create the perfect stage pictures for a sophisticated, fast-moving production.

Act One of the new musical “Some People Hear the Thunder” is fast-moving and engaging. The events of the Armenian Genocide by the Ottoman Turks during World War I become the accessories for telling the tale of ace reporter Jason Karan’s (a brave and forthright Alex Prakken). As he seeks both fame and acclaim as budding ace muckraking “hot shot” journalist while trying to hold on to the love of his life, Carole Chapin (girl next-door Rachel Rhodes-Dewey), who is also daughter of Jason’s Pulitzer-sequence publisher, Charles Chapin (James Occhio).

Act One plays out with echoes of “Newsies” (seasoned Capital District theatre-goers or those who paid to play in Steamer 10’s children’s production and are now adults may be reminded of Peter Tyger’s excellent musical on Nellie Bly)while the similarly plucky Jack seeks ever greater stories, “The Secret Garden” (the cast wears and sings and dances well in Evan Prizant’s costumes), “Phantom of the Opera” (Jason and Carole’s “Forever” which would be suitable in many Disney musicals), and finally (once Jason takes the plunge to cover the budding European conflict that would erupt into WWI and ends up in his hometown in southwest Turkey not far from the equally fictional Anatevka) “Fiddler on the Roof,” especially the excellent series of songs (special note to the Disney-esque “It’s a Small World After All” dance pastiche, “der Kaloustian Villa Dance”). The sequence is a reminder that countries that took in refugees from repressive regimes were all the stronger for following Jesus’s “Golden Rule,” i.e. “do unto others as you would have them do unto you,” not Trump’s politically correct one: “he who has the gold makes the rules.” Act One mostly lives up to the excellence of the stagecraft.

And then Act Two enters into the world of “WTH” (“what the heck,” the PG-13 equivalent for family newspapers of the more prevalent “WTF”). It’s not just the clunky forced re-insertion of the 1940’s “memoir” that tries in vain to create some pathos out of the love affair while kneecapping the events leading to the Armenian Genocide. The clueless tap number set in Central Park with Freddy from “My Fail Lady” leading a quartet of couples in evening wear executing happy rat-a-tat-tat tap routines (though maybe this was meant as hipster foreshadowing of the sound of machine guns in the penultimate scene) cuts the heart out of Thunder. The “It’s a Small World After All” reprise through alcohol through the world in “Have a Beer/Look at This Man” lobotomizes Thunder: the silliness of the scene is one thing, the lyric “don’t repent things that happened, what’s past is past” eviscerates the purported purpose of “Some People Hear the Thunder.” Someone should have been paying attention to Act Two and cut the clueless, the dumb, and the atrocious (some of the actresses knock on the door leading to the high notes in songs in act two, but the notes keep the singers securely next door). Act One, and the seriousness of the Armenian Genocide and Turkey’s culpability, deserve better.