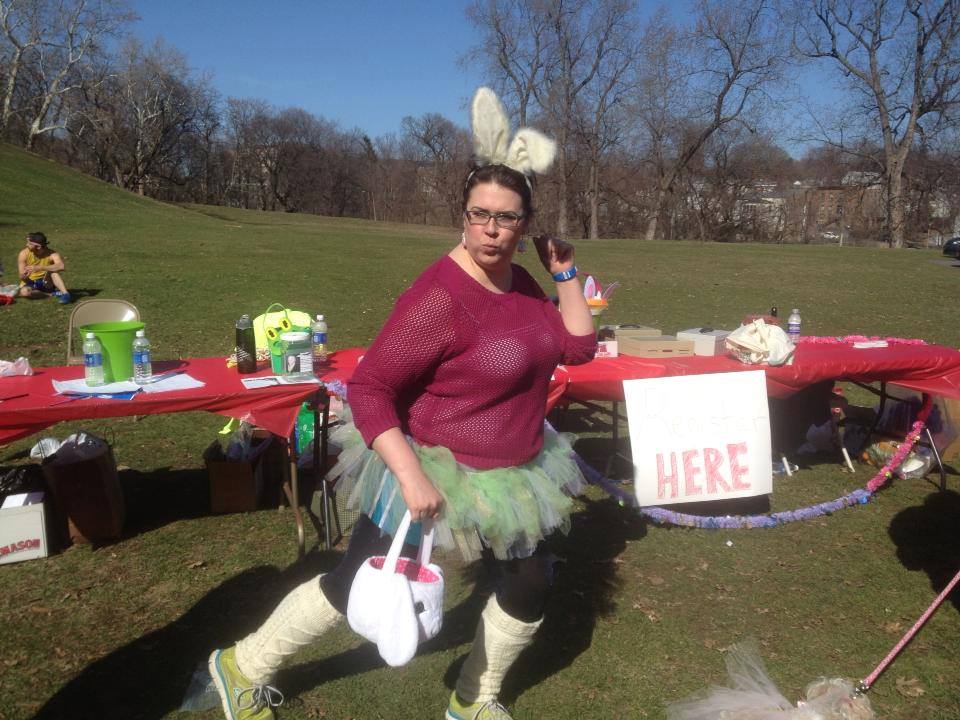 Now in its sixth year supporting local and regional charities, The Capital Region Grown Up Egg Hunt will cross the Hudson from Troy and take place this year at Jennings Landing at the Corning Preserve in Albany on Sunday, April 23 from 1 to 3 p.m. — in addition to commercial corridors in Albany and Troy.

Founded in 2012 by former Troy Record reporter Danielle Sanzone, the hunt began as an effort to raise money for the Leukemia and Lymphoma Society when she was nominated as an LLS Woman of the Year.

“As part of this fundraising, with the goal to raise $5,000 in the span of two months,” Sanzone said, “I organized the inaugural Capital Region Grown Up Egg Hunt event in a matter of two weeks. That year, 70 people attended the event at Prospect Park in Troy and that year raised $700. In 2015, we had to limit the number of tickets sold to 450 and more than $10,000 was donated to three charities.” Over the last five years, the event has raised more than $20,000 for charities and received donations from more than 200 local and national businesses.

In that short time, the hunt has grown into an annual charity event that fosters a sense of community between the citizens and local businesses of the Capital Region while raising money for worthwhile causes. Every year, volunteers stuff more than 5,000 eggs with candy and prizes, such as gift cards donated by supportive businesses and vouchers for alcohol, for hundreds of “grown-ups.” (Serious hunters wear the traditional egg hunt bunny ears.)

“The idea came from talking with friends about possible fun events,” said Sanzone, “and I asked, ‘Wouldn’t it be fun to have an egg hunt for adults?’ Well, it turns out it is fun and other people thought so, too.” Due to its popularity, the hunt expanded in 2015 to include city-wide hunts at participating businesses for egg-seekers who prefer looking leisurely to the hectic hunt.

“It was fun being creative with it! We’ve had egg pinatas, costume contests, and an egg race,” said Sanzone. “There are many people who helped in the first several years – especially friends and family. There were late nights of stuffing eggs and long days of picking up donations.”

As much as she enjoyed organizing the annual spring event, Sanzone found a new job in 2015 and found herself with less time than the hunt required. She said that she began considering who might be able to step into the role — and decided to go to Joe Bonilla, co-founder of the local media communications firm Relentless Awareness in Albany.

Bonilla and Ty Versocki, who was recently made partner at Relentless, are organizing the event this year. It was actually Versocki’s father who inspired the city-wide “Leisure Hunts” in 2015, when she was a volunteer.  “[He] wanted to participate and support me but didn’t want to run up a giant hill or compete with a 25-year-old,” she said. “I came up with the idea to have businesses host a volunteer from the egg hunt, and people could leisurely visit each place without worrying about not getting a prize. It’s a great way for people to visit a business that they wouldn’t necessarily visit.”

“So,” said Versocki, “there is the main egg hunt in Jennings landing, then the leisure hunt will not only be in Troy, but Albany as well.” She said businesses participating this year include: Stacks in Downtown Albany; Savoy Taproom; Past Time Legends; Enigma; Muddaddy; Artcentric; and Manory’s.

“I think the move to Albany makes sense since the event has a lot of potential for growth,” said Sanzone. “The city of Troy has been incredibly helpful through the years — I still remember trying to explain the concept of the event to some city officials and while it wasn’t your normal fundraiser they still supported it. Troy’s Prospect Park was great but some of my fellow organizers worried about the crowds there, which is why we limited the number to 450 in 2015.”

Beneficiaries of the proceeds from this year’s hunt are two Albany-based nonprofits: the Albany Center Gallery, a gallery space showcasing and supporting local artists, and In Our Own Voices, an organization supporting the minority LGBTQ community.

“The egg hunt is fun, colorful, nostalgic,” said Sanzone. “But it can also be a bit hectic and it’s over pretty quickly. Months of work enjoyed in a matter of a few minutes.”

For more information on the event or to volunteer, become a sponsor or purchase tickets, please visit the event website.