Creator of comic strip ‘Smallbany” takes his craft to Cali 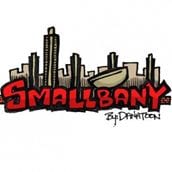 “You never know where a potential opportunity can come from,” said Dana Owens. On the phone from California where he just relocated from Albany, Owens talked about the trajectory of his artistic career and how he landed in San Diego with his girlfriend, Robyn Filkins.

When Owens and Filkins, who also an artist, made the decision to visit San Diego — to paint a mural for a friend while he is out of the country — they had no idea when they might return home. Now, they’re not sure if they ever will.

“At least, not any time soon,” said Owens, who celebrated his 32nd birthday on Sunday. The founder of DanaToons, Inc. and creator of Smallbany comics, a former resident of the Albany Barn and one of the original founders of The Machine: A Creative Co-Op, Owens has spent the last five years making a name for himself as a popular artist here in the Capital District. He said he feels it’s time for him to broaden his horizons.

He also said that he and Filkins have grown fond of the southern California weather and living near the ocean.

After only a month on the west coast, Owens has just finished illustrating his third book; a local paint store has approached him about referring mural work; he’s been talking to an LA television writer about a new animated series; and he’s about to design the logo for a side band reunion project with members of Uncle Kracker and Lynyrd Skynyrd. “He said he stumbled across my website and digs my style,” he said of Uncle Kracker’s lead guitarist Mike Adkins. “They’re looking for someone to design the logo for a reunion show and, if it goes well, he said they might get back together.”

Owens is also auditioning to be the lead singer for a west coast funk band.

“I can sing and play a couple of instruments,” he said. “And I’m goofy-

looking, which helps. But, also, I’m a really decent designer/illustrator. So I want to do all kinds of stuff on stage — maybe some projection stuff, and I make these giant caricature heads on plywood that would be really fun. I also know how to screen print and put together merchandise for a band. They seemed really interested.”

For most of his life, said Owens, “Things have always just popped up. It’s usually not intentional. And I kind of just go with the flow. It’s gotten me into this mindset where you where a potential lead can come from. Meeting some random person on the street can lead to a big gig.

“The ultimate goal,” he said, “is to just get involved with as many different things as possible and live off my talents and skills.”

Even with the various projects Owens is working on, he and Filkins have had to get day jobs to pay the rent. She just found a job working at Sprouts, an organic grocery store across the street from where they are living and Owens began a part-time gig at Pizza Hut on Friday. When they’re not working, playing or exploring their new home, Filkins and Owens are completing the mural they flew out there to paint. It’s the second mural the couple has painted together — the first is at the School of Rock in Latham.

“She hasn’t had the chance to fully establish herself as an artist yet,” Owens said of Filkins. “But she has the talent. It takes a while for an artist to find their language and she’s definitely starting to do that.”

The mural at School of Rock, painted after the school’s new general manager, Jesse Calhoun, reached out to Owens, depicts an energetic concert scene. “He contacted me on Facebook and said ‘Hey man, I’ve been starting at this blank wall and think it needs some color on it.’” Completed in January, just before the couple flew to California, the mural is one of several large Owens works that can be seen around the Capital District. He painted the murals upstairs at Hollywood Cafe on Larks St. in Albany; the one in the lobby of Madison Theater on Madison Ave.; two staircase murals at Newberry Music Hall in Saratoga; and the sign hanging above the Beer Diviner Tap Room in Troy. He has done work for the City of Albany and local businesses, produced a music video for the Troy Holiday Flea Market, and done work for several political events.

“I was always drawing,” said Owens. “There were always cartoons on everything.” Admitting that he “wasn’t the best student” academically, he said there have been many who have been supportive of his artistic talent throughout his life.

“I was very, very fortunate when I was younger,” he said. “My grandmother was one of my driving inspirations. She always told me I was going to be an artist and I was going to be famous. You know Jewish grandmothers. She would take me to visit all these art galleries.”

It was because of his maternal grandmother, who was a volunteer at the Saratoga Arts Council, Owens said, that he was the youngest artist to appear in a juried show there. She was disappointed when he dropped out of Illustration/Graphic Design school at Sage College in 2005. After working a series of odd jobs and flirting briefly with a career in truck driving, he told her he was returning to school in 2010 — just before she became terminally ill. “She got a chance to kind of see me doing my thing before she passed away,” he said.

five years ago, Owens used a small inheritance from his grandmother to found The Machine: A Creative Co-Op, the nonprofit artistic collective that made its home on Lark Street in Albany for three years. It was about seven months after The Machine opened when an ad Owens placed on craigslist — soliciting help with his accounting — was answered by someone associated with the Albany Barn and Academy Lofts, a low-cost artist residence and arts incubator located in Arbor Hill.

“So I went down there and saw the place while it was still under construction. I applied and they got back to me a few weeks later,” he said. “I was the ideal resident. Not only was I a minority, but I was also an established aspiring artist in the area with a budding business.”

One of the first tenants to move into the Barn, Owens received a good amount of exposure during his time there. He did live painting at events, produced designs for fundraisers and promotional materials, was featured on the news and even met Susie Essman, from “Curb Your Enthusiasm,” when she requested a tour of the space.

“It’s a really good thing that they’re doing,” he said of the Barn. “It really benefits all parties involved.”

When asked if his recent move was the end of Smallbany, Owens answered, “No. No, no, no, no, no.” He said that he hopes to have a friend take over the bulk of administration on his Facebook page, while he would continue to produce all of the illustrations. “I still follow a lot of things from back home,” he said, adding that there’s a possibility that he’ll return to the Capital District in April to paint a mural on Lark Street, although details have yet to be finalized with the Lark Street BID. He is also still working on a smartphone app with a friend in the region, and has a mother and two siblings here.

For the moment, it seems, he’ll inhabit both worlds. “I’m just going to keep doing what I’m doing,” he said. “My reputation is developing, and my portfolio. Because I’ve done so much back home, out here I can do so much more.”

EDITORIAL: It’s about more than the score