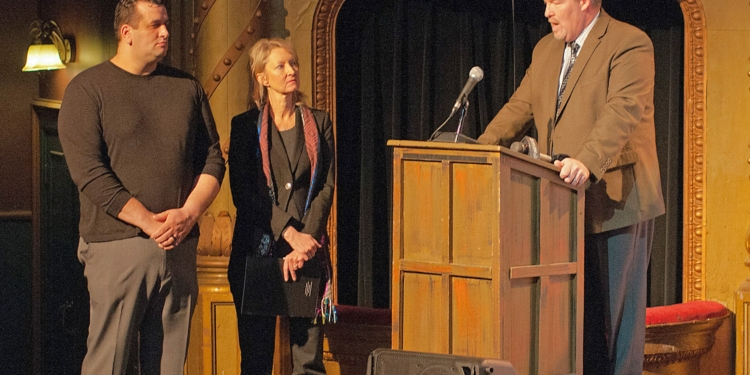 COHOES — After having been a staple in Albany’s comedy entertainment scene for the previous 35 years, Tommy Nicchi picked up his Comedy Works brand in 2016 and moved it up to Saratoga Springs. As he recalled the move last week during a press conference to announce the new partnership between the Comedy Works in Cohoes Music Hall, Nicchi said, “We would only come back for the right reason. And, this building is the right reason.”

Less than a year after it was announced Cohoes Music Hall was making its return as a viable entertainment hub under the Palace Performing Arts Center Inc., the storied music hall continues to build partnerships that will ensure its lights will remain on.

“Comedy Works will bring a regular series of comedians to a ‘Comedy Works at the Cohoes Music Hall’ series,” said Brown.

Nick DiPaolo kicks off the series Saturday, March 25. The next act features  former WWE wrestler, and Glens Falls native, “Hacksaw” Jim Duggan on Saturday, April 22. And, on Saturday, May 13, Gilbert Gottfried will take to the Cohoes stage.

before making calls out to comedians. The aesthetics of the venue, and its relative close proximity to New York City — where many such acts call home — made for an easy sell.

“We made three phone calls out, and got these three acts,” said Nicchi.

The Comedy Works comes back to the greater Capital District with stiff competition. In 2015, the Funny Bone Comedy Club established business in Crossgates Mall. It, too, brings a steady stream of regional and national acts to its stage. However, the partnership between the Palace, Albany’s Park Playhouse, the Comedy Works and Cohoes Music Hall, promises both a constant and eclectic stream of entertainment.

The Comedy Works is no stranger to bringing national names to the Capital District. Aziz Ansari famously flew into Albany and immediately took to the Comedy Works stage on what was the anchor leg of a eight-hour marathon stretch of performances in August of 2015.

Brown said she hopes to see at least one live comedy event at the Cohoes Music Hall each month through the new partnership.

Cohoes Mayor Shawn Morse expressed his gratitude for the positive affect Albany’s performing arts group has had on his city.

“The Palace Theatre has certainly exceeded our expectations,” said Morse, who added that more than 7,000 patrons have visited the revitalized hall since the partnership was announced last September. “And, [it] has become our economic engine that drives success to our downtown.”

Creator of comic strip ‘Smallbany” takes his craft to Cali