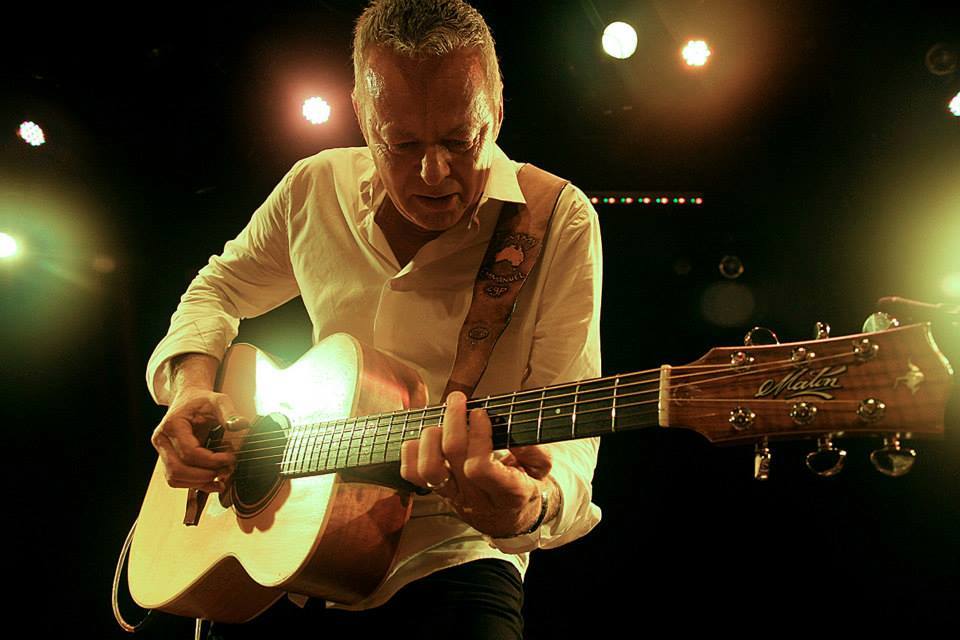 TROY — When a performer, in essence, calls a time-out on stage and refers to the mojo of the room he is playing, declares how excited he is to be there by further stating, “this is going to be an INCREDIBLE night” – that’s one thing. However, when that performer is also justifiably able to lay claim to being one of the best acoustic guitarists in the world, it’s a safe bet the audience should immediately “buckle up”, as they’re assuredly going to be in for one amazing ride.

That’s exactly what happened Wednesday, March 1 when Tommy Emmanuel stormed the stage of the Troy Music Hall. He stopped to make sure all of those in attendance knew he was completely aware of the historical significance of this awe-inspiring venue; citing the years this glorious treasure was constructed (1871 – 1874), also noting the year of its inclusion to the National Register of Historic Places (1989)…then, he immediately proceeded to tear the roof off of the place.

Let me just say, if you’ve never seen Emmanuel perform, you should fix that, as you have no idea what you’re missing.

To say he is a disciple of Chet Atkins (one of his greatest influences – having written, recorded and performed with him) only paints part of the picture. He is a virtuoso, utilizing an incredibly intricate style of finger picking on his acoustic guitar that is so accomplished, one can hardly believe what they are seeing and hearing. Yet, he does so with such a sense of whimsical delight – a looseness, mixed with a sense of spontaneity and surprise – that the audience can’t help but experience a full range of emotions throughout his performance. It was playfully frantic, stunningly beautiful, ridiculously complex, joyously simple, explosively dynamic, serenely transcending, and percussive, yet peaceful – all the while, changing tempos and moods at the drop of a dime.

Emmanuel, in essence, is a one-man band. There were times when I closed my eyes during his performance, where I wouldn’t have been the least bit surprised when I re-opened them, if I had seen a percussionist, a bassist, a rhythm guitarist and a lead guitarist on stage…but, no – it was only Emmanuel, so obviously loving every minute…every note – while delighting in the near-capacity crowd’s reaction to his diverse 22-song set.

He adeptly delivered several original compositions, ranging from songs such as “Mr. Guitar,” written for Chet Atkins / Blood Brother, which was dedicated to an organization, “Guitars for Vets” – a group of 2,000 volunteer guitar teachers who “share the healing power of music with our nation’s heroes” / “The Tall Fiddler” – inspired by and dedicated to master fiddler, Byron Berline…a song which he also demonstrated to the audience how to play – I say “good luck, folks” / and, “Angelina” – a beautifully optimistic, upbeat song written for his daughter.

Interwoven seamlessly between those, were stunning renditions of a variety of well-known classics, such as: “Saturday Night Shuffle”, “Blue Smoke,” and “Cannonball Rag” (Merle Travis), “Guitar Boogie” (Arthur Smith), “2B or Not 2B” and “Smokey Mountain Lullaby” (Chet Atkins), “Over the Rainbow” (my previous favorite rendition of this song was by long-time, regional favorite, the late Bert Sommer), and “Michelle” (The Beatles – which he indicated he plays “only to help out a couple of starving songwriters from Liverpool, England”).

The highlight of the night was a five-minute segment late in the set, where he literally used his guitar as a drum kit – playing a mind-blowing drum solo on his acoustic guitar. Yes – that’s what I said…he played a drum solo…on his acoustic guitar! It was an act of accomplished musicianship that catapulted the performance (as well as the audience) to a frenzied crescendo, transcending comprehension to such a degree, that if we had launched right through the roof and off the planet, nobody in the audience would have been surprised. It was utterly breathtaking.

Emmanuel protégé, 25-year old fellow Australian Joe Robinson, kicked off the evening with a very well received 7-song opening set – the perfect setup for what was to follow. Mixing a variety of well-known standards such as Misty (Erroll Garner), while adding a 4-song medley which included, Isn’t She Lovely and Superstition (Stevie Wonder), Robinson also doled out a few jaw-dropping originals. “Smokin’ Joe” was the winner of the 2008 season of Australia’s Got Talent, and in 2010 was named “Best New Talent” in Guitar Player magazine’s Readers Poll. On this night, Robinson’s looping skills were flawless, his electric tone was sheer bliss, adding stunning harmonic-laden riffs on his acoustic – and at one point, even played two guitars at once. He joined Emmanuel on-stage for the final three songs of the main set. Robinson is an extraordinary young talent – most certainly keep an eye out for whenever he next plays within driving distance…you won’t want to miss him!

Dave Decker is musician who calls the Capital District his home. He is also a sales representative for Spotlight Newspapers.

FRANKLY SPEAKING: The schlep must have felt like Butch Cassidy