‘Ice graffiti,’ a conversation on ephemeral art in public 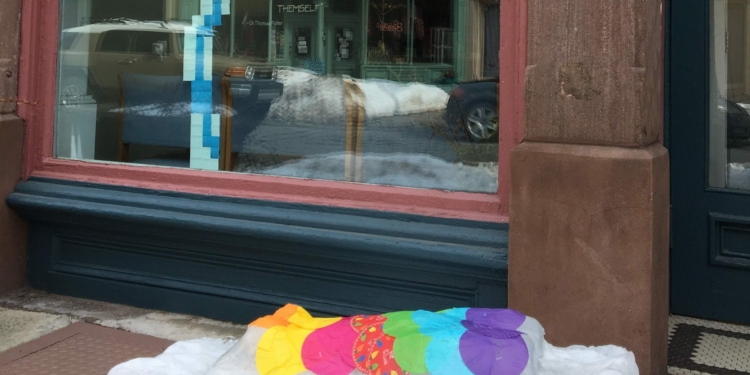 TROY — “It’s wonderful. I love it. But when I first saw it, I have to say I was a little creeped out because it’s a naked body. And, frankly, we are mostly women who work in this building,” said Barbara Lynne Nelson​, executive director of Troy Architecture Project or TAP, Inc.  “But I really didn’t let my mind go to where it perhaps could go — a creepy place, like ‘What is somebody saying to us?’”

This is how Nelson starts to describe her first encounter with what some locals are calling “ice graffiti,” a temporary form of frozen art that has been popping up around town. The anonymous artwork, which appeared in front of the TAP office sometime during the early hours on Feb. 14, features a female nude, sans head or arms, protruding from a block of ice that measures about two-and-a-half feet long by about one-and-a-half feet wide.

The staff at TAP have named the piece Venus de Melto — a play on Venus de Milo, the famous Grecian statue.

Though it’s impossible to miss when pointed out, Nelson said only she and one other coworker noticed the block of ice was art.

“I was coming in in the morning and I saw this chunk of ice and immediately looked up in the sky and thought ‘Oh my, where did this fall from,” she said. “But it was so massive. It was clearly put there. It wasn’t just something somebody was getting rid of because it would have broken if you tossed it out of a truck. If it were vandalism and somebody stole it, it wouldn’t have been placed so carefully in this area of the street where we have this nice wide sidewalk.”

By the time Nelson discovered the naked female form, someone had already thrown a bit of snow on it. “I think to make it more modest, perhaps,” she said.

The piece has certainly generated interest and a bit of wonder in the office, located at 210 River St. in Downtown Troy. Clearly, the artist has used some sort of mold or form to create the body, rather than using a chisel or other carving tool. But why ice? And why a headless female nude? How long will it last?

“It is a temporary form of public art. If it rains we’ll lose it,” Nelson said. “Now, the fact that it’s a naked body…maybe it’s temporary because this artist wants to do something that is provocative and a little bit creepy — and it _is_ a little bit creepy because it doesn’t have a head. So maybe this artist has chosen that image for that particular reason, but it should be temporary because it might offend some people.”

The fact that it might offend some people is also what’s great about temporary art, she continues.

“When public art is temporary and some people don’t like it, then you’re able to say ‘Hey it’s only temporary,’” Nelson said. “But if you _really_ like the art, and it’s temporary, well then you better spend some time and experience it and invest yourself in it a little bit and create that relationship. So you have that memory.”

Nelson herself has been a driving force in several public art projects in Troy, including Troy Alley Action, creative crosswalks and the Green Island Bridge TroyBot mural (by artist Ben Karis-Nix). And while all of those art projects will fade away over time, none were deliberately designed to be temporary like her largest public art endeavor, Breathing Lights.

Breathing Lights received a $1 million grant, through the Bloomberg Philanthropies Public Art Challenge, to illuminate the windows of hundreds of vacant buildings in Albany, Schenectady and Troy with a diffuse glow that mimics the gentle rhythm of human breathing. The installation ran from October to November 2016.

“Breathing Lights was my first experience with temporary public art. And I had to get on board with that because it seemed like a lot of energy to put in to something that wasn’t going to last. But I definitely see the value in it — there’s something very special that has a temporary place in your experience. Now, as I drive around, I miss the Breathing Lights. I really do. I miss not just seeing them but the whole memory of the experience. So I missed the experience —  not just like when you take a painting off a wall and you miss seeing it but the relationship that you develop with it. If it’s powerful enough then you miss it,” Nelson said. “I had never really experienced that before. So having gone through the whole experience creating something and then letting it go, I definitely see the value in that. It makes it that much more precious.”

The conversation between ice graffiti artist and viewer seems to take on several levels at TAP, a nonprofit architectural firm that provides rehabilitation advice to applicants in historic districts and works to educate the public on historic preservation issues.

“We are in the most permanent type of art imaginable, the preservation of historic architecture. We deal with a lot of components of buildings that are over 100 years old. So we have this great ability to preserve an appreciation for these things — and not just the buildings, because TAP is a neighborhood preservation corp.,” said Nelson, an architect. “We see preserving buildings as part of preserving the culture of a neighborhood, and preserving neighborhoods is critical to the life of a sustainable city.”

One of TAP’s most significant projects was the preservation of the Rice Building, a magnificent flat iron style building located a few doors down the street. Completed in 2000, the $2.5 million effort was a joint project of Rensselaer Polytechnic Institute, First Niagara Bank (formerly The Troy Savings Bank) and TAP, Inc. The building featured prominently in the 1993 Francis Ford Coppola film “The Age of Innocence.”

It’s hard to imagine what the character of downtown Troy would be like without the Rice Building forming such an important point in the heart of the city.  Perhaps the ice graffiti artist meant to remind us of that when leaving the ephemeral creation in a bed of snow outside the TAP office.

“Nothing lasts forever,” Nelson said with a smile before heading to her desk to get back to work.

NIGHT and DAY: Young the Giant and Choo Choo Soul