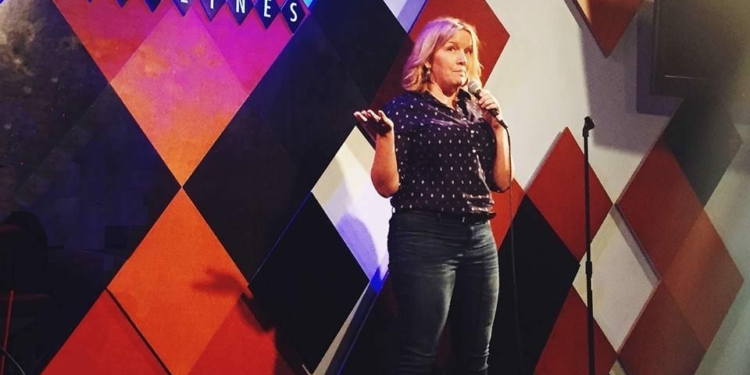 The interview was wrapping up just a few minutes before her show was to start.

Was there anything you’d like to add that my questions didn’t touch upon?, I asked.

“We didn’t even talk about my sobriety,” said Erin Harkes.

The local musician and, as of four years ago, comedian is never shy about the subject of alcoholism. Her sobriety has been covered in newspaper features. It’s a part of her comedy skit.

“It’s very much a part of me,” said Harkes. “I would not be who I am without my sobriety.”

According to the National Council of Alcoholism and Drug Dependence, Inc., roughly one in twelve people in the United States suffer from alcohol or substance abuse. Harkes has been sober for six years. Those participating in Alcoholics Anonymous carry a token depicting the length of their respective sobriety. A reminder. A last extension of a helping hand before one walks into a bar.

Harkes spends her life in bars. According to last year’s schedule, she worked 274 shows; on a 365-day calendar, that’s three-quarters of her days. The musical comedienne quit her day job about four years ago. “It’s a hard thing to do when you’re surrounded by …,” she said, gesturing behind her: a bar that stretched the length of the room, lights bouncing off bottles of liquor and the shiny metal of beer taps. In a career that often obligates her to perform in front of her former vice, she expressed pride in her ability to maintain the course.

But, Harkes said she understands not to be overconfident. She’s her own manager, and her own accountant. “No one does me better than me,” said said. She’s her own boss in a line of work that requires a thick skin impervious to crowds unreceptive to her jokes, indifferent to her songs, or the occasional heckler. It’s also needed when she listens to her body, feels a familiar urge, and packs up her equipment. She said it doesn’t happen often, but it boils down to a short conversation between herself and the venue owner: the owner either understands or she doesn’t play there again. Her attitude is not out of contempt. In the end, she said, she has to take care of herself.

Despite her propensity for travel — again, 274 shows last year — Harkes has attempted to be more selective with her shows. When she first quit her job, she said she would take every opportunity presented her way. Last year, she attempted to taper off the number of shows by selecting quality over quantity. It was a means to prevent herself from burnout. There’s also the balance between her music career, and her comedy one.

“If I wasn’t doing music full time, I’d probably be doing a lot more comedy,” said Harkes. Her reputation is strongest with music, so it pays more. “It’s like you couldn’t take an unpaid work day to go do whatever your hobby is. So, it’s really hard for me to take comedy shows. They have to be really worth it. … I have to sit down and seriously look at it. Is it really worth it? Is it a good investment? Sometimes the return, you don’t make any money at all doing comedy. So, I just work really hard on the other end to supplement it.”

So, you’re a double threat like a Bo Jackson?

“[Laughs.] Do you really have to make a sports reference to a musician?” she asks.

Truth be told, she holds on to early comparisons to former Fleetwood

Mac lead singer, Stevie Nicks. Harkes’ soulful lyrics, her music delivery and, perhaps, her light-hued locks, has had people comparing her another double-threat. (Nicks has long been known as a dancer during live performances, and is recognized for her contributions to fashion, as well.)

“The first music I remember listening to was Fleetwood Mac,” said Harkes. “I loved the harmonies. I loved everything about it. … I was born in 1977. Clearly these albums were before my time. I’d just like to state that [for the record],” she said, as she laughs some more.

Jackson — again with the sports reference — was a rare gem of an athlete who excelled at two professional sports. He would often be asked as to which he prefered, and obscurely referred to one as a hobby over the other. Harkes said she loves both music and comedy — and doesn’t want to choose.

“I love music,” she said. “It provides for me. I feel very blessed. I mean, I work really hard and it just blows my mind that I’m able to do it [for a living]. The comedy is way harder. I don’t know if it’s because it’s still new to me still. The excitement is so fresh. I get nervous, and I enjoy that.”

“They each have their pros and cons,” Harkes said. “I wouldn’t say I love them equally. I love them much differently.” With music, she said, she sits down and dives into the music. No interaction with the crowd is needed. However, she describes comedy as sometimes “terrifying,” because she’s not able to hide behind anything. The interaction between performer and audience is vital to the quality of a show. “It’s like every few seconds, someone’s standing on your chest.”

“With the comedy, you need the audience and you need the attention,” said Harkes. “It seems like I’m putting myself in a precarious situation, because I’m already an attention-starved individual.”

It’s January, and Harkes has her schedule planned out for the entire year. She’s the regular host of the all-female comedy show “Chicks Are Funny” at the Funny Bone in Crossgates, in addition to the hundreds of shows to which she travels. There is no time to reflect on her progression, but she said she sets goals with each coming year; one of which was performing last year at Carolines on Broadway in New York City.

“I don’t ever like to tell people my goals,” said Harkes, “and I’m the only one who knows if I fail them.” But, just as she did when she quit her day job, she’s taking the opportunities that come to her. Only this time, the opportunities are getting much better. Before she was able to establish goals for 2017, she was already accepted to perform at the Boston Comedy Festival. And on television, she was asked to appear for the third season of Hulu’s “Laughs TV.”

Colonie police are looking for help to ID two dogs