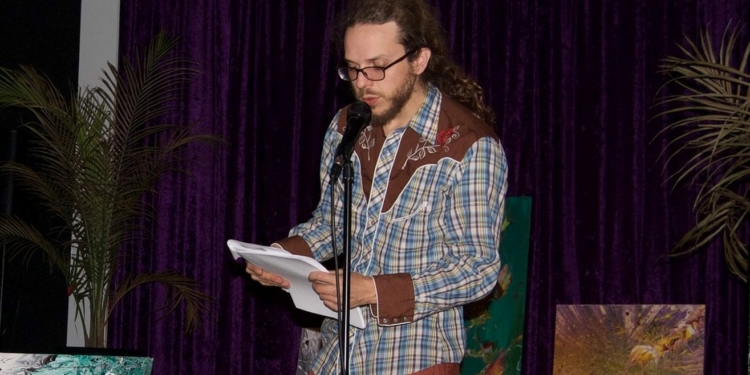 “The Love Poetry Project was born out of a perceived need for greater empathy, love, compassion, and understanding in this world,” said Christopher Caulfield, curator of The Love Poetry Project (‘Portraits of love, of pain and bliss, breaking and building, giving and receiving’). “During our time of great upheaval, war, social division, xenophobia, and a resurgence of fear-based politics in America and elsewhere, it aims to remind people of some of our common experiences involving love, that great glue of the universe, in a time when so many feel isolated and lonely.”

“This book of poetry on love began as a relatively modest exposition of about 10 local artists and friends of mine in upstate New York,” explained the PhD student in Philosophy and Clinical Ethics at University at Albany, where his focus is on empathy and compassion in a healthcare setting. “I have perceived for some years that poetry has a mysterious power to draw honesty from deep within folks, allowing them to say things they wouldn’t normally speak aloud. This book is, at its core, poems about love, in all its various forms. It has continually grown since that modest inkling of a vision into a burgeoning community of authors from around the world sharing their stories of love, and making connections through understanding.”

Caulfield launched the 155-page book at Troy Kitchen on Tuesday, Dec. 20, where some of the contributors shared their work and others shared their music. In total, Caulfield said that the project has 97 contributors worldwide, “including friends, family, and strangers.” The finished product can be purchased online at the crowdfunding site Indiegogo — www.indiegogo.com/projects/love-poetry-project-lovestory. Also available are art, custom love poems and, expected November, eventually a movie.

As word of the poetry project spread, Caulfield said, “friends came to me and shared excited stories about their writing. One friend searched all her journals and past poetry but could not find a single entry about love itself. She was so happy to be meditating deeply about love for the first time — success! Another friend told me repeatedly that he could not write poetry and did not even know what love was. He wrote a poem about struggling to know what love is — success!”

Poems were contributed primarily by Capital District locals, including a number of notable names: Taina Asili, Olivia Quillio, Lecco Morris, Bell’s Roar, Sean Rowe, Amani O+, Hyacinth Miles and Dana Owens of Danatoons. The poems bear names like Andromeda Has Better Acoustics, Love and Language, I Miss Pretending With You and I Am A Karner Blue Butterfly.

“One poem,” Caulfield, who contributed two poems of his own, continued, “by my dear friend Alex Kochkin is published posthumously, having also been published by his mother Anna. I perceive that this project, and exuberant expressions of love in all forms, embodies an energy which can heal the soul and soothe the mind. The reader’s understanding and empathy provides healing in itself.”

Caulfield had published an earlier book of poems with a Buddhist theme, but says he appreciates the many people who helped with the production of his most recent project on love. “Patrick Harris helped with video and audio recording,” he said. “The final book formatting and publishing was by Patrick Kiley at Publication Studio Hudson, in Troy.” Avery Stempel, Melissa Parade, Brandon Costelloe-Kuehn all helped with the proofreading and the Indiegogo video trailer was produced through non-monetary service exchange website simbi.com.

“Love is not a thing, love is power, love is energy, love is contagious, love is healing,” said a speaker at the book launch. “Spread it, like too much jelly on your favorite sammy.”

“How can one word mean so many things,” asked another. “It’s so important that we learn its infinite nature.  Thank you for this opportunity to scratch the surface.”