Michale Graves, former frontman for The Misfits, talks to us about ‘American Psycho,’ The Zombie Apocalypse and more 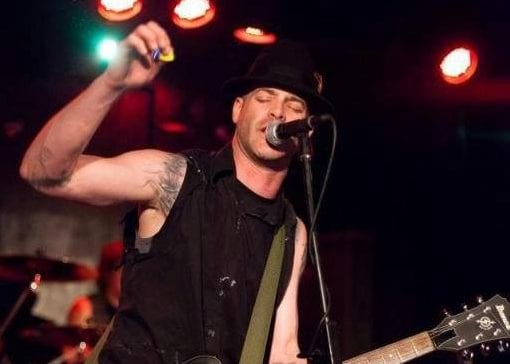 Graves continues to play to live audiences and produce albums, whether as a solo act or as a contributing act.. (Photo via Facebook)

TROY — Speak of The Misfits and just about anyone knows what you’re talking about: Whether it be a gentle nod to acknowledge a hard rocking band out of New Jersey,  or a heated debate on the merits of “American Psycho.”

For five years, Michale Graves fronted the iconic rock horror band. He helped flip the band from punk to hard rock after replacing its original lead singer, Glenn Danzig, in 1995. Just like some die-hard Van Halen fans who refuse to commit to Sammy Hagar in favor of David Lee Roth, some Misfit fans stay devoted to Danzig. Nonetheless, many fans see “American Psycho,” fronted by Graves, as the band’s greatest album, as its 20th anniversary approaches next year.

Graves has since moved on to appear on several albums, both solo and contributions, hosts a radio show and continues to tour across the country. His latest stop brings him to Dinosaur Bar-B-Que in Troy Friday, Dec. 23.

Michael Hallisey: I read last month that your gear was stolen in Vegas? What’s the story on that, and any updates?

Michale Graves: There are no updates regarding the theft of the band trailer and all of its contents. (Shaking my head) The universe just did everything in its power to destroy the Endless Sleep Tour… that’s for sure. I think it’s worth noting that the following happened along with suffering from an ongoing, viciously painful injury I was nursing on the tour…my dog dying while I was in Texas — that it happened while we were in Vegas on Oct. 30th to play at the Dive Bar before the big Halloween show at Whisky A Go-Go in Los Angeles.

We got to Vegas early that day, checked into our accommodations and all kind of went our separate ways.  Long story short by 4 p.m. our trailer with tens of thousands of dollars worth of gear and merchandise was stolen in broad daylight from a parking lot where we were staying. It’s all gone without a trace, into thin air.

Actually, there was video surveillance of a black SUV that backed up to our van and took off with the stuff, but no license plate can be seen in the video.  That’s the road for ya. You win some,  you lose some.

Hallisey: I found it funny to learn a hard rocking frontman like yourself lives in the tranquil surroundings of the Hudson Valley. But, knowing your penchant for horror rock and films, it must give you inspiration for writing, or nightmares. How’d a Jersey kid such as yourself find a home here?

Graves: I’ve been coming up this way for all of my life. For years, I worked at Sunny Hill Resort in Greenville for the Nicholsen family. There are so many memories and life connections for me up here that reach deep, deep into my soul.  The magic of The Catskills charms me and never fails to cast a spell on me. I live on a large acreage in an old farmhouse built in the late 1800s that used to be a goat farm.

There is an apple orchard that was planted by gypsy passer-bys a long time ago, and the Catskill creek borders the property. Much work needs to be done overall here to restore it back to the way it once was, but I love it and so do my children.

Hallisey: Many people know of you for fronting The Misfits. I admit hesitating to ask about the topic, as its been a number of years since you left the band. How tired are you of answering questions about The Misfits? I ask because you’ve been a part of several projects over the past 15 years. You’ve gone on record to say you’d consider a reunion, but has that changed and what keeps it from happening?

Graves: I rarely tire about talking about The Misfits.

I am very proud of the work that I did while I was in that band, and cherish the connection my compositions made with people all over the world. To this day, those bonds still exist, and it continues to grow. I am 100 percent in favor of a Misfits reunion. “American Psycho” turns 20 next year, it makes perfect sense to do. It hasn’t happened because Jerry Only and Doyle [Wolfgang von Frankenstein] haven’t expressed interest in doing it.  I hope at some point they do.

Hallisey: Going over your body of work, I see zombies everywhere — Revenge of Zombies, Zombies Unite, Zombiesuckers. There are zombie runs, zombies in Call of Duty, zombies in cartoons and television. What is going on with mainstream media that has, all of a sudden, fallen in love with the pending Zombie Apocalypse?

Graves: Perhaps predictive programming, eh? A glimpse of things to come, a conditioning operation to ease the reaction to societal collapse…? Another rock on the pile of soul crushing niches that urge us to embrace a culture of death instead of a culture of life. A psy-op, if you will.  “Everyone, deep in their hearts, is waiting for the end of the world to come.”

Hallisey: You’re hitting the Dino in Troy, and folks are excited about that. You’ve been touring of late playing acoustic sets. Is that what folks can expect from you this week? Your latest release was earlier this year, with the coming of a new year what kind of plans does Michale Graves have for 2017, and is there any chance Troy will get a hint of something new?

Graves: Yes, I am very excited to play in Troy on [Friday, Dec. 23]. The acoustic set is powerful and I urge music lovers to come out and see.  I love the challenge of animating my songs in the simplistic form of delivery. There is nothing to hide behind when it is just your instrument and voice.  My trick is filling these songs with life, emotion and soul so that they become hard hitting and emote in listeners souls in a very special way. The love I have of music lies within its ability to reach someone and connect with them the way nothing else we experience as humans can.

So, 2017 will be packed with great stuff.  With my partner Mark Allen Stuart and through our company “Hydraulic Entertainment” (www.hydraulic-entertainment.com) we plan on a new record that will be recorded in February and released in March followed by a national acoustic tour. We plan on filming a feature film, more music videos and short films. I also plan on releasing a book I have been working on in October, I will continue to write on my blog (https://michalegravesblog.wordpress.com/)which I try to do as often as I can.

Also, I plan on continuing my radio/tv show called “The Michale Graves Show” which is my most favorite thing to do and work on.