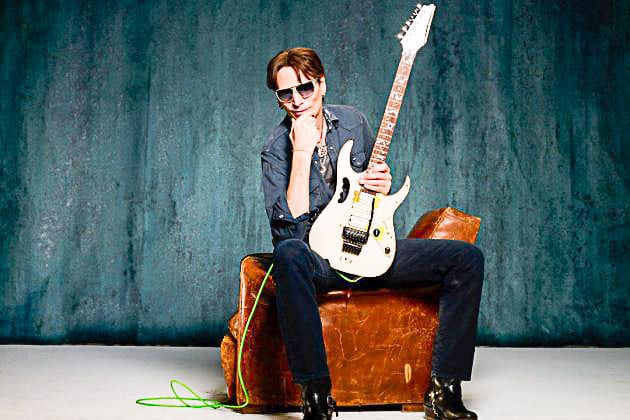 ALBANY — Celebrate the 25th anniversary of Steve Vai’s 1990 solo, Grammy nominated recording, “Passion & Warfare” with the guitarist himself this Friday night, Nov. 4 at 8 p.m. in the Hart Theatre at The Egg.

He will perform the entire album from start to finish, with some special surprises along the way.

According to Vai, “Creating this record was a complete liberation for me. It’s a reflection of music that was tormenting my psyche for a long time to get out. It was a thrilling vindication to be acknowledged for something I felt so strongly about.”

While many musicians fit easily into a single category, Vai’s unique musical vision remains unclassifiable. After more than 20 years, Vai continues to use unbridled guitar virtuosity and soulful artistry to explore the spectrum of human emotion. From “Flex-Able,” his self-released solo debut from 1984, to his most recent “Alive in an Ultra World” from 2001, Vai creates a sound all his own by striking a balance between technical ability and poetic phrasing.

His full discography encompasses more than 60 albums, including recordings with Frank Zappa, David Lee Roth and Whitesnake, among others.

For more information or to purchase tickets online, visit www.theegg.org.

Check out more than 160 cars, trucks, SUVs and minivans, including the 2017 all-electric Chevrolet Bolt EV and the 2016 BMW i8, during the area’s largest, indoor new car show. This year’s exhibitors include 32 automobile and automobile-related manufacturers.

All ages entertainment includes comedic balloon fun with Mr. Twisty on Saturday and Audra Miller Facepainting on Sunday from noon to 4 p.m. on the concourse level, and Virtual Racing and Football-Kick Wall presented by Amusitronix in the exhibition hall both days.

Adult tickets are $9 each and children ages 12 and younger will be admitted free when accompanied by an adult. While tickets may be purchased on line at www.ticketmaster.com/Times-Union-Center-tickets-Albany/venue/1154, or by phone at 1-800-745-3000, event organizers strongly

recommend buying them in person at the Box Office. Head to the show at any time on Friday and buy tickets for only $5.

The Times Union Center is located at 51 S.  Pearl Street in downtown Albany.

For more details about the show, including lists of manufacturers and exhibitors along with a schedule of events, visit www.albanyautoshows.com.