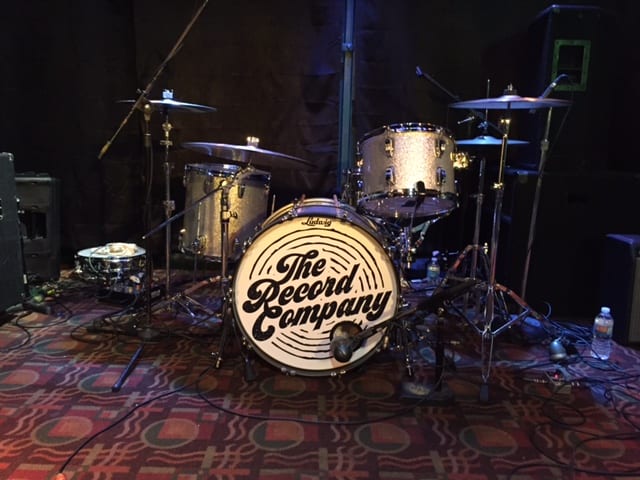 ALBANY — When The Record Company took the stage at the Hollow I saw and heard the definition of Rock and Roll in its purest sense by way of a Fender P-Bass, a set of “60’s” Ludwigs and a harmonica through a “Green Bullet” Shure. That was it. No loops running, nothing being sampled, not a keyboard in sight! Just Rock with plenty of Roll. As per The Record Company’s lead singer and guitarist Chris Vos, “the roll” is the important part that so many people forget, and after seeing them roll though a 12-song set, I get it!

The Hollow was completely sold out on this night but was operating in an expanded format that helped accommodate the capacity crowd.

The last time the L.A. based band was in town was back in February when they played to a packed house at The Low Beat for some hundred, lucky people. Now, eight months later, The Record Company returns with two songs charting on Billboard, as well as the current album “Give it Back to You” charting on both Rock and Alternative album charts and still we have the luxury of seeing this band in such a great small room.

The Record Company’s rhythm section, composed of Alex Stiff on bass and Marc Cazorla on drums were something to be heard and felt. They would lay down this huge pad for Chris Vos to show us his harmonica, vocal, guitar, slide and lap steel prowess. Did I mention this is one talented dude? There are many bands and guitarists embracing the lap steel at the moment but Chris Vos owns it! His distinct style and sound on both Rita Mae Young and Off the Ground have done a lot for their chart positioning.

During the set Chris was referencing one of their major influences, John Lee Hooker and it was never more obvious than in the song “Turn Me Loose.” He also gave a shout out to an idol of theirs that they grew up listening to, Adam “MCA” Yauch of the Beastie Boys and surprised us with a great cover of “So What’cha Want.”

One thing’s for certain, this a show that I won’t soon forget nor will the diverse crowd in attendance that night. This crowd was not just the usual suspects that turn out for shows. The Record Company is one of those bands that appeal to a variety of demographics. I think they’re one of those bands that everyone’s dad would love. Check them out today and help your dad download it.

HEALTH and FITNESS: When your body wages war against you