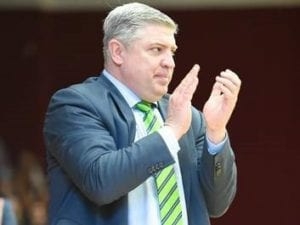 Now get up close and personal with one of the Capital Region’s best-known sports figures.

Admission is free and open to the public.  Refreshments will be served.

Entering his fourth season at Siena, Patsos will talk about Saints basketball and his thoughts on the upcoming season.  He also will describe what it was like winning a national championship at Maryland in 2002.  The program will include time for questions and answers, giving the audience a chance to “ask the Coach.”

Patsos is known as one of the most entertaining coaches in college basketball, with The Bleacher Report calling him “college basketball’s quirkiest coach.”  Patsos led Siena to the CBI Championship in his first season as head coach, the only national college basketball title the school has ever won.  This past season, Siena finished third in the MAAC with a 21-13 record overall.

For more information about “Bagels and Basketball” with Jimmy Patsos, contact B’nai Sholom at 518-482-5283 or [email protected]

For a full listing of goings on in the Capital District check out TheSpot518 calendar of events.