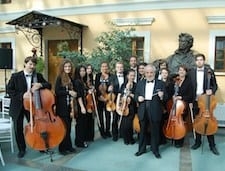 The Close Encounters with Music season opens with the return of audience favorite Chamber Orchestra Kremlin in a panoramic program of Haydn, Tchaikovsky, and Shostakovich (augmentation of his powerful 8th String Quartet).

The grand and lush sweep of Tchaikovsky`s Serenade for Strings was not lost on the composer himself who said, “I am violently in love with this work and cannot wait for it to be played.”

Haydn’s Cello Concerto in C was discovered in a private music collection in Czechoslovakia in 1964 and has since been embraced by cellists as one of the major solo vehicles for their instrument. Carving out a singular niche, the “crème de la Kremlin” tours the U.S., Europe, Asia, and South America annually, and has recorded over 30 CDs with its signature supercharged brilliance.

HOT SPOT: Rory Block at The Grove at Neumann