by Michael Hallisey
in Music, The Spot
0 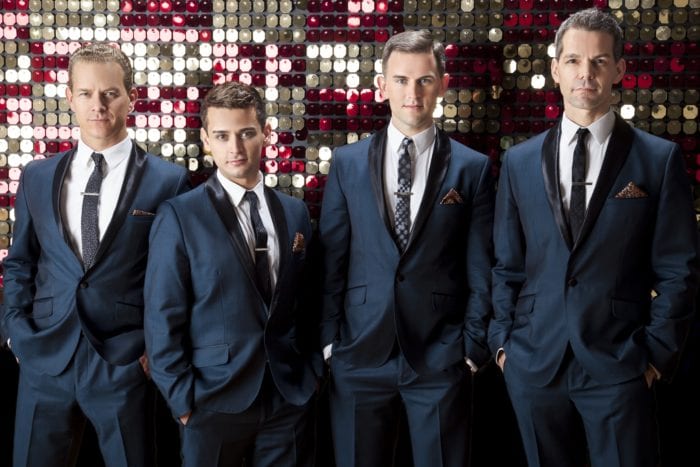 The four started a Broadway phenomenon as the “Jersey Boys” and now continue to bring back the magical music of the ‘60s in “The Midtown Men.” Submitted photo

SCHENECTADY — Broadway can change a man, if only his CD collection.

For the better part of a decade, actor Daniel Reichard has been living in the ‘60s. He may be best known for portraying Bob Gaudio in the smash Broadway musical “Jersey Boys,” a role he originated in 2005 and continued to play through the production’s first two years. “Without a doubt, I’d be listening to something else,” he said.

Though he admits to always loving music from the Ed Sullivan decade, the success of the Tony Award-winning musical has had a firm grasp on him. “Jersey Boys” recently announced the date of its final performance to the musical’s historical run on The Great White Way. Come Jan. 15, it will be the 12th longest-running production in Broadway history — logging in a projected 4,642 shows.

“So rarely in the history of Broadway have people been able to be associated with a huge success,” said Reichard. “I just love that, when I was 26 when this show came into my life, how much just one audition changed my life.”

Reichard passed the Gaudio role down to another player years ago. Today, he’s preparing to embark on his 7th national tour of “The Midtown Men,” another musical that brings the audiences back to the British Invasion, the heyday of Motown, and some more of The Four Seasons.

And, the tour starts with its opening performance at Proctors Theatre in Schenectady, Thursday, Sept. 15.

“All four of us on some level has grown up with this music in our lives even though we didn’t live through it originally,” said Reichard. “We heard these songs in our cars, in our family cars, in our homes, when we were out at an amusement park, or at a wedding… We had no idea how important this music would be in our lives…. The passion for this era of music is very much alive and well across generations.”

These talented entertainers shared the Broadway stage for over a thousand performances in the mega-hit “Jersey Boys.” Now, as “The Midtown Men,” Reichard said he and his cast mates have become the “ambassadors” of a style a music devoid of voice-altering technology. Just nothing but talent. They’ve thrilled crowds on concert stages across the United States, Canada and in Beijing, performing over 600 shows and singing with 31 major symphony orchestras.

“This is the four of us in concert, and our show is all about old-fashioned, old-school show business,” said Reichard. Unlike Jersey Boys, which plays out the time line of The Four Seasons, from the band’s initial success in 1960 to when the four ultimately broke up, “The Midtown Men” features hits from The Beatles, The Rascals, The Turtles, Motown, The Four Seasons and more. And the travel between shows helps bring that world closer to the stage players. “When we started touring, we said to each other, why don’t we see what it would be like to tour like all of these groups.”

The Men recently released their first radio single, “All Alone on Christmas,” written and produced by another Jersey icon, Steven Van Zandt of Sopranos and (Bruce Springsteen and) the E Street Band fame. They were honored to perform the song at the White House for the National Tree Lighting Ceremony in Washington D.C.

The group has also released two successful public television concert specials: “The Midtown Men Live in Concert,” taped at the New Jersey Performing Arts Center’s majestic Prudential Hall, and “Meet the Midtown Men,” which goes behind the songs to get an inside, personal look at the Men and their music. Both are currently airing in markets nationally.

Their recent show at New York City’s famed Beacon Theater was a sellout smash and featured guest stars Shirley Alston Reeves from the Shirelles, La La Brooks from The Crystals, Gene Cornish from The Rascals and Petula Clark, who had 3,000 people up on their feet for “Downtown.”

“Our act is a well-honed, well oiled machine,” said Reichard. “It’s all about enjoying the music in the moment. It’s not a play. It’s the four of us, live in concert. There are no rules for us. We say what we want, and we make every show special. It’s not just a Xeroxed experience, like when we have a Broadway show and try to recreate the same thing, we have the independence to personalize each show and really connect with each audience. And, that’s what’s kept the show fresh over the years.”