The whole picture: an interview with acclaimed playwrite and creator “A Night with Janis Joplin,” Randy Johnson 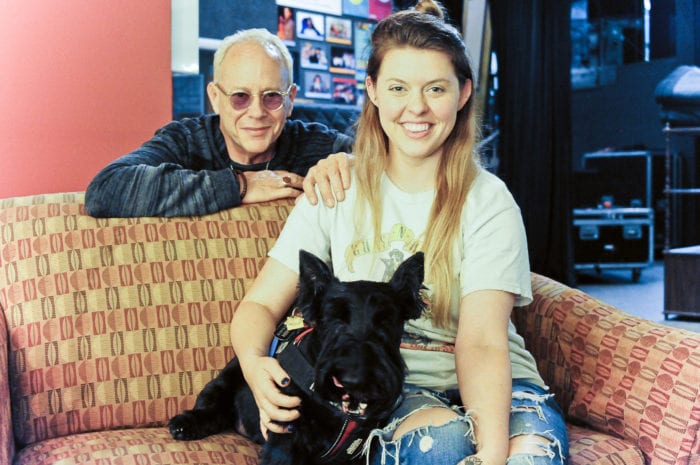 Randy Johnson and Kelly McIntyre on the first day of rehearsals at theREP. Photo by Michael Hallisey/TheSpot518

ALBANY — Music has surrounded and influenced Randy Johnson since the writer and creator of “A Night With Janis Joplin” was born.

His godmother is renowned jazz musician Keely Smith, and her association with the famed “Rat Pack” introduced him early in life to musical legends Frank Sinatra and Dean Martin. He says that he also cut his teeth on the blues and jazz of artists like Nina Simone and Odetta Holmes; the very first concert he ever attended, at the age of 16, was Simone at the Troubadour in West Hollywood, Calif.

“I grew up around music royalty,” he said, sitting with his leading lady at Capital Repertory Theater in Albany, where his Broadway show will be opening on Friday, July 8. “I’ve been very blessed.”

So, when, on Oct. 11, 2010, he met the family of Janis Joplin and they asked the acclaimed playwright if he would be interested in creating a production that would share something of her personal story, he leapt at the opportunity. “They provided the source material for the show,” he said.

“We met and they gave me copies of her personal journals and her writing and that’s how the show was shaped. In reading her writing and talking to Laura and Michael [Joplin, Janis’ siblings], what I learned about Janis is that, far too often, her death and her demons are celebrated and not her life and her music. And that is the point of my show.”

“When I met the Joplin family,” said Johnson, “I was introduced to a Janis that people don’t know. I’ve learned about Janis through her family’s perspective and, eventually, through the perspective of Janis herself. In my first meeting with Michael and Laura, I asked them to tell me of stories about growing up with Janis and their perspective of their sister. Who would have known that Janis grew up listening to Broadway show tunes?”

“You wouldn’t listen to her and think that she was classically trained,” said Kelly McIntyre, the actress who portrays Joplin in theRep’s performance. “The grittiness, or the rawness, about her is the thing everyone knows and, because no one else sounds like her, everyone’s eyes go wide open and they can’t look away and they can’t stop listening.”

“She spoke the truth,” continued the 23-year-old actress. “Whatever came out, came out. You listen to her wails in “Ball and Chain” or in “Crybaby” and, at times, it’s almost like there are no detectable notes.”

“But it’s on pitch!” exclaimed Johnson.

“And somehow,” continued McIntyre, “You’re still with her and she always comes back down to the bottom and then you hear this gorgeous alto, this beautiful voice that is up there with Pat Benatar and all the other female rock goddesses out there who were probably classically trained.”

Johnson and McIntyre both referred to the message conveyed by the young artist — a message that they seemed to agree amounted to a deep personal truth which she endeavored to resolve through abject honesty. “I connect with her, I think, age-wise, especially because I was the age that she was when she first got famous and I think it’s kind of cool to pay homage to that,” said McIntyre. “She was an inspiration of mine – still is, obviously – musician-wise; intelligently; as an artist; as a soul; as just a chick. I mean, she lived life more easily than we know how these days. There’s a lot going on that we take too seriously.”

Johnson envisioned the show that Joplin never played, he said. “It’s the concert before she made her final mistake.” It is the show that never got played; the show Janis would have played if she knew it was her last. Both Johnson and McIntyre feel that Joplin–as well as other fated musical legends such as Kurt Cobain and Amy Winehouse — knew her time was limited.

“The song “Kozmic Blues,” said Johnson, “I think, is a foretelling of her death, of the night that she died.

“Me too,” agreed McIntyre.

“If you read the lyrics to that song, it’s actually a foretelling.”

When Johnson speaks of his initial research for the production, he personifies the material, saying, he “brought Janis home.” As he researched, he said he separated himself from outside distractions, surrounding himself so he could tell her story.

“If Janis had hired me to create her concert,” said Johnson, “and to tell her story, this is what she and I would have come up with together. Beyond the obvious celebration of an artist whose life was cut short, the production also plays homage to the legends who influenced Joplin — Holmes, Simone, Aretha Franklin, Etta James, Bessie Smith.

After one performance on Broadway in 2012, Johnson was standing outside of the venue and was approached by two women who met at Woodstock and saw Janis Joplin perform live. They had come to his show on their anniversary, he said, “to relive the magic of meeting and falling in love under such extraordinary circumstances.” They cried, he cried. And then he took them on a tour of the set.

Alan Lobel up for national fitness award: Delmar resident who has cycled for nearly 14,000 miles on a stationary bike inspires other seniors to get fit