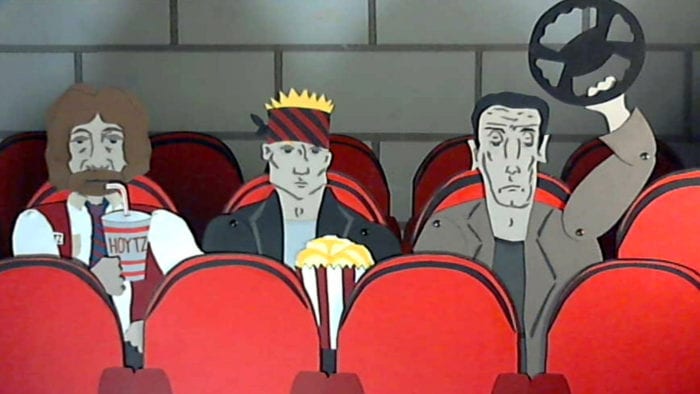 In “The Right Nut for the Job,” a popcorn maker called “the Cornado” goes rogue and eats the manager of the Cine 10 Theater Hoytz before bolting. It’s up to projectionist Ace McWalto and his two pals, Paolo Pinta and Mike LeMieux, to go to Center Square’s Black Rock Park to tame a wild Cornado and bring it back to the movie theater.

This is the plotline to the first episode of the stop-motion animated series “Theater of the Absurd,” the brainchild of husband-and-wife duo Tom and Colleen McWatters.

By the way, Cornadoes are real.

“When I worked at the Cine 10 Theater in Northway Mall, the popcorn machine was called the Cornado. It was on the side — it was not something we nicknamed it,” said Tom. “It was such a stupid name … stupid, but brilliant.”

The Cornado isn’t the only thing in Theater of the Absurd’s world based on real life. The Cine 10 Theater Hoytz is based on the Cine 10 Theater that used to be behind Northway Mall in Colonie, and the town’s name is that of the Albany neighborhood around Washington Park, where the McWatters lived for several years.

“The front of the (movie theater) set that you see in the episode is pretty much exactly what the theater looked like,” said Colleen.

“The projection booth, the front of the theater, the concession stand and the ticket counter, the bulk candy — all of that was pretty much how I remembered them,” added Tom.

While the sets might reflect realism, the stories — written by the McWatters and their friend and co-producer, Chris Martinez — are anything but.

“The stories always come from something that either may have happened … or not even may have happened — they’re just an idea,” said Tom. “Obviously, most of the stuff comes from real life, even as silly as it is.

At first, the McWatters wanted to use clay to create their sets and puppets, but they soon found that it was a much bigger task than they could take on.

“It was very labor intensive,” said Colleen. “I started building the three-dimensional sets. We’ve got a couple of them upstairs … they’re huge. They’re probably 3 to 4 feet wide by maybe 2 feet deep, and they were tall. They needed to be big enough in order to manipulate the puppets and the props and everything in there. So, they ended up being huge, and we just didn’t have the space or the money. It took a long time to build them, too. So, that’s how we ended up switching to paper, because it was faster and more economical.”

The McWatters gained some inspiration for their stop-motion animation technique by researching what “South Park” creators Matt Stone and Trey Parker did in the early days of their show, before they turned to computers to speed up the process. Then, the McWatters took it several steps further than Stone and Parker by giving each character movable arms with hinges for better movement.

“I think ours is way more intricate (than South Park),” Tom said of their animation technique. “We use paper, but we went way more into it then they did.

“We wanted it to be a little bit more abstract, artistically (too). That’s why we shots like when Ace is on the roof smoking, and then the smoke covers the screen and then his giant head floats in and just starts bobbing up and down.”

“Our strengths complement each other,” said Colleen. “We wouldn’t be able to do it without the other. This project is only possible because of the two of us collaborating with each other.”

The work was long — five years — and painstaking to make “The Right Nut for the Job,” but the payoff came last summer when they premiered the episode at The Low Beat, a rock club on Central Avenue. A packed house watched and laughed as Ace, Paolo, Mike, Valentina (a concessionaire with a quick temper) and Finkle (a nerdy concessionaire with dreams of becoming an assistant manager) dealt with the bizarre happenings at the Cine 10 Theater Hoytz.

The episode was then entered in last year’s inaugural Madison Theatre Film Festival, where it was nominated for the People’s Choice Award.

“It was kind of surreal seeing it on a movie theater screen,” said Colleen.

It was also gratifying to the show’s creators to hear the audience laugh at the jokes.

We laugh when we’re creating the scripts, but just because we’re making ourselves laugh doesn’t mean we’re going to make everybody else laugh,” said Colleen. “So, it was a really cool experience to hear people genuinely laughing at our sight gags.”

Since then, the show’s creative team has been working on the next seven episodes. They hope to have episode two — named “Open Mike,” which is about a surreal night at a Center Square open mic hosted by Mike LeMieux — completed within the next several months. They also are beginning to make music videos. Their first project is a video for Tom’s song, “A Different Kind of Crazy Now.”

“We’re the only people in all of Albany who do this,” said Tom. “We trained ourselves at this with nobody to teach us. We had to go out there and read every book, we watched every program … we did it all.”

Currently, “The Right Nut for the Job” can be streamed and downloaded on Amazon Prime or viewed on either YouTube or the show’s website, www.theateroftheabsurd.org.

Off the rails: two tanker derailments at Selkirk Rail Yard have some local officials yelling, and others yawning