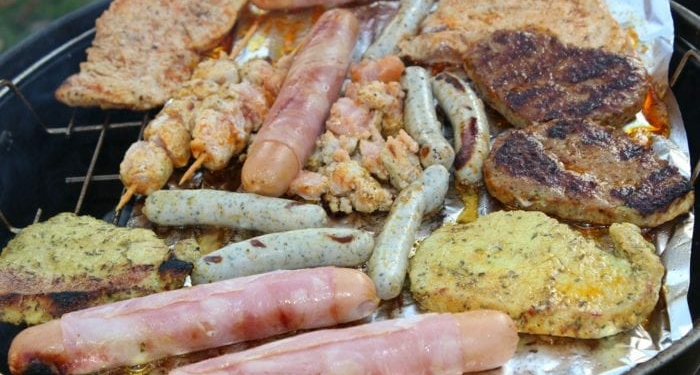 This past weekend was the unofficial start of summer.  And with it comes the family gatherings, barbecues and so on.

Truth is in my experience summer is the time when people gain the most weight. Yes, you read that right…

More weight will be gained in the next two-three months than at any other time of the year.

And yes that includes the Thanksgiving to Christmas season.

I’m sure that surprises many of you because conventionally the belief is that people are doing more things outside therefore they shouldn’t gain weight.

But in my experience it’s quite the opposite. Oh sure people are out and about more, but are they exercising at all? Or if they are, is it at the same level they do during other times of the year.

Sadly the answer is no.  The proof… walk into any gym during the summer and see how empty it is.

The cardio equipment will be empty; classes will have sometimes only one or two people in them and the weight area a barren wasteland.

As mentioned, most people avoid going to the gym and instead say they are out riding their bikes, jogging or walking.

Now that’s not to say those aren’t beneficial activities but more often than not they are doing them at a much lower intensity than they would working out at the gym.

Add to it very few continue to strength train during the summer, instead focusing on the “low and slow” cardio which doesn’t burn anywhere near the calories people think it does.

Also, people aren’t working out anywhere near as often as they think they are.

Let’s face it after a long day at work when the weather is beautiful the temptation is to relax on the porch or near the pool and just unwind. Not to get out and exercise.

So those who hit the gym 4-5 times a week in the winter suddenly only “workout” 1 or 2 times during the summer. If that…

And it isn’t just exercise that goes by the wayside. Good eating habits go right out the window too.

Family events and barbecues are a trap that few can avoid.  Think about it for a moment. The typical menu at a summer party includes things like:  chips and dips, potato/macaroni salad/coleslaw all made with lots of mayo, grilled meats, cookies, ice cream and other sweets and so on.

And, let’s not forget the alcohol. Lots and lots of alcohol.

It’s not just what we eat but how much we eat that comes into play.

A few years back I had some of my clients track what they ate on Memorial Day.  On average they ate over 4000 calories in just that one day with one person eating and drinking over 7500 calories!

Another client tracked the entire weekend and found she ate almost 15,000 calories in just 3 days… or almost 4 times the number of calories she should have been eating!

And these were folks focused on losing weight!

If you want to stay on track with your health you need to be vigilant.  Keep going to the gym and working out.  Or if you choose to workout outside make sure you do it at a level that is challenging.

Most importantly focus on eating some of the great foods that are in abundance during the summer like fruits and vegetables instead of those salads swimming in mayo. Keep the portions under control and savor nature’s bounty instead of mindlessly eating everything on the table.

You can get thru the summer without gaining weight. You just have to resist the temptations and stay on track.

Dan Romand is co-owner and operator of Full Circle Fitness – NY in Colonie, where he is also a certified personal trainer.

Summer so sweet: We’ve got some ideas for desserts this season