by Spotlight News
in Food and Drink, The Spot
Reading Time: 5 mins read 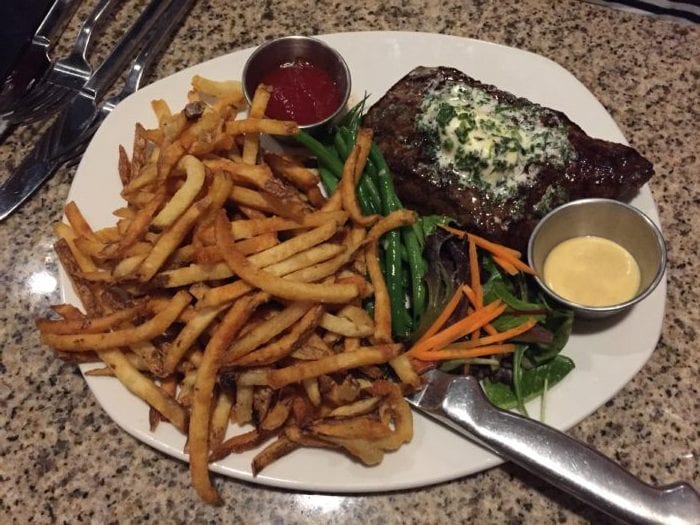 It was a confusing weekend in the food world for us! There were some very highs, but also some very lows.

Let’s start with Friday night. After a long week of heavy workouts, and a wicked Friday spin class, by the time I got home I was the epitome of “hangry”. Once everyone was home, and settled, we decided to head out to Garden Bistro 24 in Latham. It is generally easy, tasty and relaxed. We called ahead to see if there was outside seating available, and headed out. Once we got there, the 10-year-old promptly decided that it was too cold to eat outside, so we headed in. We put in an order of poutine, as well as glasses of wine for both my boyfriend and I. The service was odd: two servers, one who was extremely friendly and another who seemed rushed and stressed, although there were only 3 seated tables.

Anyhow, our poutine arrived and it was delicious. I have had it there before, and it didn’t disappoint. Cheese, gravy, caramelized onions and fries? Who could complain? It is a small appetizer for four of us, but it was enough to start to calm the “hangry”. When we placed our order, my boyfriend went with two appetizers, the French onion soup and the season flat bread. The 16-year-old chose the bacon blue burger and the 10-year-old the hanger steak.

I was torn. I have had their burgers and they are outrageously delicious, but I wanted to try something a little different. So I ordered the Salmon Tartar appetizer – big mistake. I love raw salmon, such as lox, in sushi, really however it is served properly. Then my “dinner” actually arrived.  I took one look, and honestly almost cried. I know, I know, getting that emotional about food? But I was starving. The salmon was quite clearly directly out of a can, and served in the shape of a can. I hate to say it but it looked exactly like something I would feed my cat. I took one bite and was accosted by a nauseating taste that isn’t even describable.

I quickly made the decision that I needed to order something else, called the waiter over and calmly told him that “this was not as described” and he could feel free to wrap it up for us, but how long would the bacon blue burger take to get to me? He said he would rush it, so I sat back and waited. In the meantime, I told everyone else to go ahead and eat. The 16-year-old was in love with her burger, and the 10-year-old’s steak looked perfect. She was having trouble cutting it, and when I helped her, I saw that it was clearly a very nice cut of meat and cooked just right. The herbed butter sauce was plentiful but not overkill. Plus, it tasted wonderful; I couldn’t resist a bite. My boyfriend eats equally fast in general, so I didn’t get a taste but he said his soup and flatbread were really quite good.

Then, finally, blissfully, my burger arrived. I really like some red to my meat, and it was cooked perfectly rare/medium-rare. They pride themselves on their burgers and there is clearly a reason why. It was just what I needed and I finally was able to calm down and enjoy.

Once the bill came (more than $130), and we saw that they had not done anything about the so-called salmon, we didn’t fight it, but I decided to let the waiter know just how disappointed I was. I was calm, but honest.

So if you are heading to Garden Bistro 24 – stick with that they are known for and you will be happy. Otherwise, I can’t make any promises.

Now, on to the second mixed experience of the weekend. We had planned on Sunday brunch after the gym at a place in Schenectady that ended up being full and not taking any more walk-ins, which was a let-down, but at least they knew what they could and couldn’t handle for volume. That can’t quite be said about our next stop. After a quick trip through the Farmers Market, we went over to More Pereccas. This time is was just my boyfriend, the 10-year-old and myself. They split some sort of bun at the Farmers Market because they were making me crazy about how hungry they were. Boy, am I glad they did that.

Pereccas was crowded, but they seated us right away. Once they seated us, and after they took our drink orders, they let us know that it was going to be a “bit of a wait.” That ended up being a very mild way to put it. My mimosa arrived quickly and, really, they have one of the best mimosas around. In large part because the orange juice is so fresh and they don’t skimp on the prosecco. We ordered quickly, the 10-year-old chose a BLT, the boyfriend went with their famous Eggs in Purgatory and I went with an Italian frittata, made with egg whites. Huge plus in my book: when I asked for egg whites, there was no eye rolling, no “let me see,” just an easy going “ok, great.”

Twenty minutes later, one mimosa down, and it became quite clear (as we watched the tables around us) that our food was going to way longer then “a bit of wait,” we asked we could have some toast. Our server was wonderful and brought it over immediately. Once I knew I would have the toast to soak up some of the prosecco, I ordered a second mimosa.

Another 30 minutes later, with still no food in site, we were starting to get a bit antsy. Then, without any prompting, our server came over with a massive cupcake, and told us it was for being so patient with the wait. With a 10-year-old at the table, that made a huge difference!

I should note, when I made a trip the ladies room, I witnessed a server coming in the from the porch, with a check and 10 separate credit cards that a party had asked him to ring through on the bill. They did it graciously but, first off, that really annoys me (10 cards?!?) and, second, it shows just how busy it was — even outside.

Eventually our food arrived and true to Pereccas reputation, it did not disappoint. My frittata was exactly as I ordered it — mushroom, caramelized onions, some Fontina. Plus, it was fresh off the stove, which I am kind of a stickler about. I love their side potatoes because they mix in sweet potatoes, which you don’t see much!

My boyfriend devoured his Eggs in Purgatory (a poached egg dish with spicy fradiavlo); he has had it before, and this time it was just as good, if not better than prior. I always like to have a tiny taste of his — it was quite spicy but, oh, it really was good. The heat isn’t there just to be hot, it has a purpose for the flavor — and they do a wonderful job with that. The 10-year-olds BLT was standard and she liked it, so I was happy.

So the moral of the weekend, be careful if you order something that an establishment is not known for, you may end up highly discouraged. Second, if you are told its going to be a bit of wait, ask just how long “a bit” is.

We will return to both places but we will be sticking to those rules. No salmon tartar, and how long is long?

Elizabeth Schaefer has lived in the Capital District her entire life and currently resides in Niskayuna. She spends the majority of her  time at the gym, as both an instructor and a “gym rat”, but strategically plans on at least one “cheat” meal a week. Please submit suggestions on places to try, for either a health conscious tasty meal, or for that weekly cheat meal. She can be reached at [email protected]

Summer so sweet: We’ve got some ideas for desserts this season