Kids are busting out: Stockade Kids opened for the Village People, now take on Tulip Fest this weekend 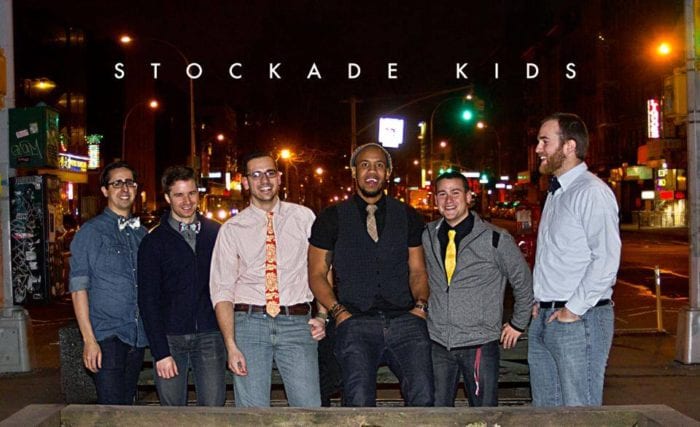 “I don’t ever feel like playing big stages is a stretch.” Justin Friello, Stockade Kids

ALBANY — The way lead singer Justin Friello sees it, there isn’t a stage too big for Stockade Kids.

The Schenectady-based hip hop/rock band recently opened for the Village People at Proctors, and now they’re headlining the Washington Park Lakehouse stage on the first day of this year’s Tulip Festival, May 7, in Albany.

When asked if he thought his band would someday grace Proctors’ mainstage, Friello said, “Yes. I always thought we would be there … I don’t think we thought we would be opening for the Village People at Proctors. I think that was the more unbelievable part of that show. But, I don’t ever feel like playing big stages is a stretch.”

Still, it was a moment the six native Schenectadians savored.

“It was pretty awesome to walk out on stage and to see … there was about 1,000 people there that night,” said Friello. “When you’re so used to playing in those bar atmospheres where people are drinking and kind of enjoying themselves, sometimes the music is secondary. It’s nice to be in those venues where you’re on stage and you’ve got everyone’s attention. They’re just waiting to see what you’re going to do. It’s almost humbling.”

“Scottie Monaco … had came to see me and (saxophonist/vocalist) Josh (Mlodzianowski) perform a duo gig, and he really liked us and what we were doing. He approached the two of us and said he wanted to work with us,” said Friello. “A little while after that, Filming Ohio started backing him. He would perform his own songs, and we would perform the music for him. At a certain point, it just made sense that Filming Ohio and Scottie Monaco would just come together as one unit.”

Mlodzianowski said Monaco brought something to the table the rest of Filming Ohio could not.

“The biggest part of that was his energy and his presence on stage and with the concept … and the message he was trying to convey through his songs he was writing. It was being on stage with him that made us want to get together with him and write songs with him,” said Mlodzianowski.

The group – which also features trombonist Aden Brooks, bass player Will Dobson and drummer Vinny Fazio – recorded an album shortly after forming in 2013 and began developing a loyal fan base. Their first breakthrough came in 2014 when they won the Schenectady County Battle of the Bands, and they’ve been gathering steam ever since.

Along the way, Stockade Kids have given the Capital District’s hip hop community – one largely ignored by the general public – a higher profile.

“I don’t think we’re strictly a hip hop band. We have a rapper, and we have hip hop influences,” said Mlodzienowski. “So, maybe we are fortunate because we have other influences in our music because we know a lot of rappers who are not getting stages, who are not given that spotlight. I don’t want to say it’s rap light, but I think it’s easier for people to digest. So hopefully … I don’t want to say we’re opening doors, but … maybe this will open people’s ears to other music that they wouldn’t ordinarily listen to.”

“What often happens is either me or Josh or Scottie will have written part of or a whole song. And if it needs other verses or needs a chorus, we kind of send voice memos back and forth between each other,” said Friello. “Once it’s in a more fully-formed state, we’ll bring that to the rest of the band and we’ll just kind of play what we have – have everybody listen, see what they’re feeling and noodle along to it. And then, we’ll just run it a couple of times and see what happens.”

The shape of the songs have been known to change when Stockade Kids play live.

“I personally like taking a song that we know really, really well and right as we’re about to play it, I’ll say something like, ‘Alright, we’re going to take this really, really slow and see what happens,’” said Friello. “I like playing with that kind of stuff, too, because it changes the whole vibe of the song, so parts change. The horn lines might change, the bass line might change – other things develop that way.”

That spontaneity will be on display Saturday when Stockade Kids takes the stage at Tulip Fest.