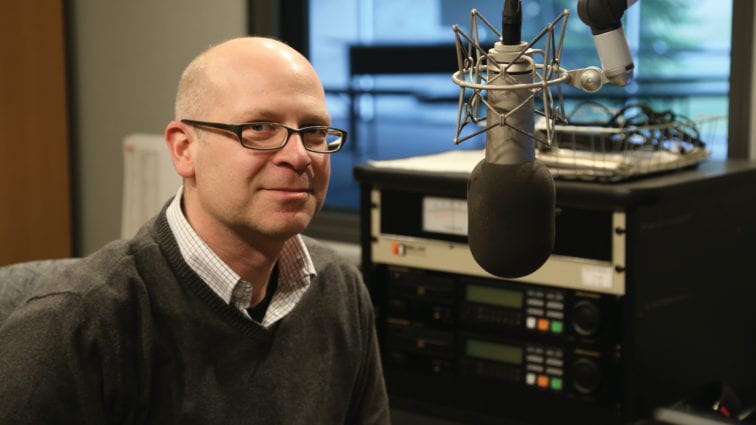 As WMHT-FM's radio music director, Rob Brown has a lot to say when it comes to what plays on the Classical Companion. (Submitted photo)

TROY — Do something long enough, and you become good at it.

For more than 40 years, Troy’s WMHT-TV has supplied the Capital District with a steady broadcast of classical music. No. The programming does not consist of tired old recordings of Bach and Beethoven you could find on vinyl at your local library. Last week, for example, the station featured the recording of David Bowie narrating “Peter and the Wolf.” The Beatles song catalog has been played on classic guitar. And, on many occasion, Star Wars fans can catch John Williams’ score played on its radio waves.  Those are just a few examples of how the Capital District’s “Classical Companion” has maintained relevance to a contemporary crowd of music lovers.

As the radio station went through a recent fundraiser, we approached Rob Brown, WMHT’s Radio Music Director, to ask him a few off-the-cuff questions.

Q: It goes without question that musical tastes vary within a person; maybe winter doldrums bring out Brahms, where the whimsies of summer usher in show tunes from Gershwin. With such a vast catalogue at your disposal, what do you find yourself going to from time to time?

A: What a great question. We need to get you in to program the music. I find myself going back to a couple of pieces no matter what the season is—Mozart’s “Requiem,” Bach’s cello suites, Beethoven’s symphonies. But then, I do tend to really like some of the more melody-centered stuff come spring — like Dvorak’s “Serenade” or Holst’s “St. Paul’s Suite” — and the darker, more brooding renaissance/baroque sound in winter.

Q: Albany Symphony Orchestra’s music director David Alan Miller, who can often times be heard on the station, has received many accolades in his now 25 years in Albany. He travels the world. He’s “Super Conductor” to the kids, locally. Nevertheless, who envies whom in this situation; Does the maestro envy you, or do you envy the maestro?

A: We envy him, absolutely. He is such an asset to this community. And the orchestra is such a treasure. Plus, he gets to stand up in front of that orchestra and coax all the power and beauty out of it. We crank up the speakers in the studio, but it’s nowhere near the same thing.

Q: Fans of any given genre of music can be very particular in categorizing artists. Adele is adult contemporary, Kanye is hip-hop and Bach is baroque. Say anything that may conflict with these fanatics, and you may find yourself in trouble. With that said, how many phone calls come in asking to identify the station as “Your Baroque Music Station”?

A: It does not sound as good as “Classical Companion,” no. And we really don’t play primarily baroque music. We have the all-Baroque Bach’s Lunch weekdays from noon to one. But other than that, I’d say most of the music we play actually does come from the classical or Romantic periods.

Q: Your radio personalities often share stories about each composure between tracks. Some of those who we hold in such high regard today were not appreciated by their contemporaries, as if fans of the station are truly fans of the underground scene generations ago.

A: It amazes me that Bach’s music went out of favor for a very long time. He, in particular, always seems so timeless to me. His music can be played on any and every combination of instruments. Yet for ages he was considered inferior to his great friend Telemann.

Q: Mozart in the Jungle is a television hit. Aside from entertaining, the show seems to lift the notion that those involved with classical music have too much starch in their collar. What are your thoughts about the show, or that aforementioned reputation classical music seems to have?

AI’m much too stuffy and dignified to watch television. Although I do love when Elmo sings Bizet with Denyce Graves.https://www.youtube.com/watch?v=zZFmNJjv1LM And I’m pretty sure I could take Ax in most video games. If not Dance Dance Revolution, then certainly MarioKart racing.

We really do thank all of the people who have given over the past 43+ years. It is a tremendous history and a tremendous community of supporters. We’ve had a great fundraising drive so far this spring, hearing from more listeners in fewer hours and with more music during each hour. It seems to be working so we will keep going with that. You can always add your support on our website, wmht.org, or by calling 1-800-285-9648. Thank you so much.

A drive to gain an impression