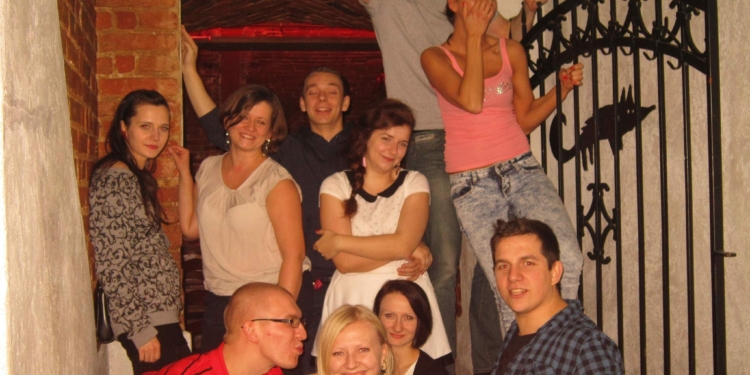 Alf Pacino is one of the improv troupes slated to perform April 23 at the Madison Theater.

ALBANY — Comedy and tragedy go hand in hand. The masks of the two Greek muses act as the universal symbol for drama. Motley Crue, the heavy metal rock group used the imagery for the cover of its 1985 hit album “Theatre of Pain.”

On Saturday, April 23, a band of improv troupes from Albany and beyond look to tie the two muses together again in order to help a local cause in the Albany Improv Festival at the Madison Theater.

Improv: is the informal form of the noun improvisation, especially as a theatrical technique. People most commonly associate it with comedy. Adam O’Connor, member of the local improv group Sorry Not Sorry, and co-founder of the Albany Improv Festival, defines it as that, theatrical and musical. It’s a medium that often tasks a performer’s ability to think quickly.

A B-side track on “Theatre of Pain” sings of the pains and struggles of people in an unnamed city.

In a sense, that is what a group of volunteers at Albany’s State Street was doing. Where Motley Crue focused on the degradation of a community from crime, the Albany Damien Center sought to help people in need.

The Albany Damien Center provides housing, meals, job placement and a whole litany of things for people afflicted with HIV and AIDS. The center serves as a resource center with programs and activities designed to improve health, reduce stress and increase the quality of life. Incorporated in 1990, the center was named after a Catholic priest who focused on the care of terminally ill lepers in Hawaii in the late 1800s. It had called 646 State Street its home for nearly 30 years, until a fire ripped through the century-old building in August 2013. The fire ignited in the basement. Neighboring residents reportedly called 911 within a half hour of its start. According to the center’s website, the building and all of its contents were all but lost quickly, within 45 minutes.

The center now conducts business out of the First Lutheran Church on Western Avenue.

“Their cause is so great,” said Adam O’Connor, founder of improv group Sorry Not Sorry and co-organizer of the Albany Improv Festival. “And, they need the money because of the disaster that happened. Not only are they a great cause, they are also in need of funds. So we figured they would be a good beneficiary of our festival.”

Flash forward to 2016, O’Connor and fellow co-founder Laci Lee have spent a year organizing a one-day festival that will include 21 improv teams from Albany and beyond. About a dozen of the teams call the Capital District home. Some hail from New York City and New England. O’Connor said the a team out of Texas has been confirmed to perform. “It got a lot bigger than we anticipated,” he said, “and we’re very excited about it.”

The catalyst behind the idea was sparked by a similar festival hosted in Hartford. A handful of area troupes organized a day trip to attend the festival in Connecticut. Once there, O’Connor said he and Lee took one look at one another, apparently sharing the same idea.

“During the day we (Adam and Laci Lee) kinda looked at one another and said, we can do this,” said O’Connor. “What we wanted to do was to get all of the local troupes together for the day to have fun, and it kinda snowballed from there and got into this big kind of thing.”

Festivities start at noon with a workshop entitled “Positivity & Connectedness” facilitated by Christopher J. Simpson. Simpson is artistic director of the Contemporary Theater Company in Wakefield, R.I.. Simpson is also a member of Bait & Switch, the closing act for the festival, scheduled to end at 10 p.m. The day is scheduled in hourly blocks, with three troupes scheduled for each hour.  Local television personality Benita Zahn will be guest presenter for the evening.

To make a direct donation to the Albany Damien Center visit AlbanyDamienCenter.org.

“The way we’ve been saying it is, hopefully this is our first annual improv festival,” said O’Connor. “Our goal is to be do it again next year, try to make it bigger and better next year.”

Get To Know: Rebecca Cavalieri