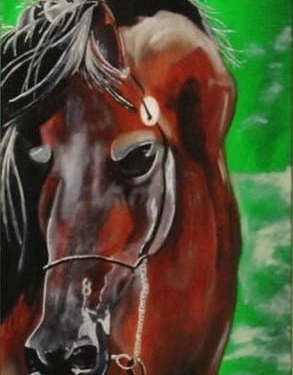 SCHENECTADY — Local artist Tim Dobert, first decided to pick up a paintbrush after spending 25 years in law enforcement. He was looking for something to help him deal with the stress from the job. Since then, he has found that and inspiration through his art.

Dobert stated that he found an escape in his paintings. Dobert found a form of therapy that brought him peace, being able to take a blank canvas and create a portal into another world.

After Dobert’s retirement from law enforcement, he decided to devote his energies into his art. He said he likes to create pieces that help others escape, for that moment in time, and help ease the stress of everyday life.

Dobert is a practicing Shingon Buddhist, and has been practicing martial arts since the age of 10. These practices reflect in Dobert’s work. His works are taken from moments in his life. Whether he was thinking of someone, something or someplace, once he’s inspired by that thought, at that moment, Dobert turns his mental image, into a vision on canvas.

Dobert said each piece is created with a meditative energy. He reaches deep down inside to share a small piece of himself while he creates something to calm and sooth the mind and take the person looking at his work to another time and place.

Dobert said he learned to appreciate art from an early age. He first learned how to draw; learning the subtleties of shadowing, blending and lines. He then tried his hand at oil painting. The self-taught artist learned from the likes of Beaurpe, Ginzburg and Christenson.

Dobert has a love for the East, wildlife and jazz music and even created his own art company Dobert’s Canvas. Dobert lives in upstate New York with his wife and three sons.

A collection of Dobert’s work is currently on display and for sale in the Farber Miness Lounge, located in the lobby of the Schenectady Jewish Community Center at 2565 Balltown Road.

Get To Know: Mark Grimm