Tapping into a children’s classic 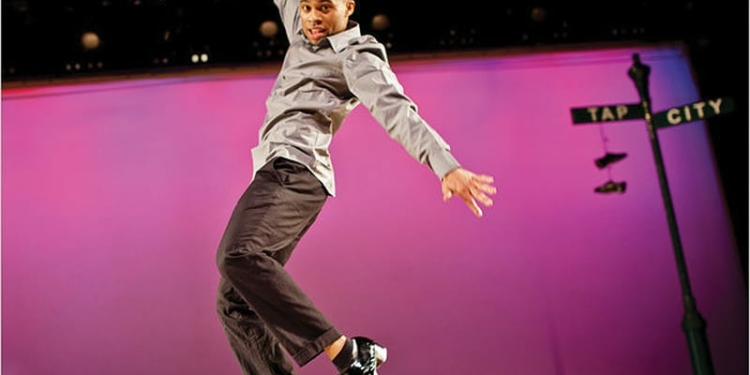 • Where: The Egg, Albany

Cartier Williams, who stars in the debut of “Peter and the Wolf, An Urban Tale” on Nov. 21 and 22 at The Egg Center for Performing Arts, said he was looking to bring an updated classic to the stage.

Williams, a longtime protégé to tap dancing legend Savion Glover, directs and choreographs the contemporary adaptation of the Russian classic, which features music by Sergei Prolofiev and a script from T.E. McMorrow.

The piece follows Peter as he tries to court Brenda Bird and fight off The Big Bad Wolf, Gangsta. Featuring a modern twist on other famous characters, including Mac Cool Cat and Doris Duck, the hip opera performance draws the audience into an update of the classic Russian children’s story. William’s choreography and his company of tap, ballet, hip-hop and modern dancers brings the famous cast of characters into a 21st century urban setting.

Williams is keenly aware of the technological distractions today’s youth are bombarded with. Facebook, Twitter, Instagram – are all facets of an Internet-saturated lifestyle that starts young and perpetuates into adulthood.

Despite this information age, the younger generation doesn’t know enough about the classics, said Williams.

“They don’t know the classical stories that I knew as a little child,” he said. “Something about those stories were really cool. They gave you an imagination, a fantasy to go there, and I feel we’re losing that today in the world. Every day. We’re losing that day by day.”

Williams’ own childhood reads like a story of chance meetings with iconic individuals, from Steven Spielberg to Glover, to Gregory Hines and President Bill Clinton. The opportunities presented to him opened his eyes to different worlds, including the contrasting worlds within dance.

“There’s two different worlds that exist in dance,” said Williams. “There’s the dance world that has everything: modern, ballet, ballet fusion, African – all of that is in one world. All right? Then, the tap world, stands alone. It’s only because, at some point, not everyone was able to bridge and do both. The modern dance, the hip-hop, all that stuff was a little bit more easier [to get involved] than the tap. So, when that happened, you could be in two different worlds.”

“Peter and the Wolf” is as much about revealing a classic to children as it is an effort to bridge the dance worlds together.

“I’m really into ballet. I really like ballet. There’s something so elegant about it. It’s classy. It’s a great thing and I like to put elements of ballet into my dance,” said Williams.

From the ages of 6 to 9. Williams studied at The Washington School of Ballet under the tutelage of Mary Day. When he was 10 years old, Cartier co-starred with tap legends Buster Brown, Jimmy Slyde and Dianne Walker in the international tour of “Footnotes.” In this month’s addition of Dance Spirit, he was featured among the “13 Of The Dance World’s Hottest Young Choreographers.”

At 25 years old, Williams has compiled an eclectic resume that includes film, directing and choreography. But, he’s best known as a hoofer – a style of tap dancing that involves more improvisation, with a technique that incorporates the entire foot.

“So, hoofing is a lifestyle,” he said. “When dancing with a hoofer, you right away see they have something other tap dancers don’t have. For example, Sammy Davis, Jr., Gregory Hines, Savion Glover, the Nicholas Brothers – they have a glow about themselves. This is what hoofing is.”

He’s focused on sharing that glow with children. Through The Williams Davis Foundation for the Performing Arts, a nonprofit organization of which he is a co-founder, he is committed to bringing the joy of performing arts into the lives of people worldwide.

The Friday showing of “Peter and the Wolf” will be exclusively for 450 at-risk children in the Albany area.

With discounted tickets, $6 instead of $10, the debut promises to be a great experience that will provide children a contemporary fairy tale they can relate to while demonstrating the power of dance in story-telling. Tickets are available at www.theegg.org/event/cartier-williams-company. For more information and to purchase tickets for “Peter and the Wolf, An Urban Tale,” visit www.theegg.org/event/peter-the-wolf-an-urban-tale.

A taste of the South in Latham