A race through Albany history 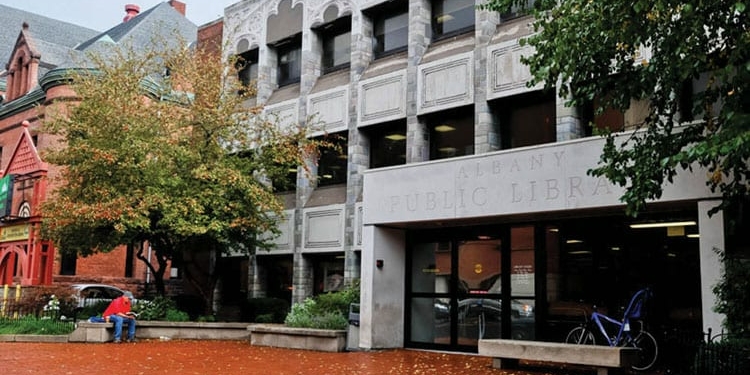 As the local history librarian for Albany Public Library, Jim Davies has found a way to combine his love for history with his love of gaming.

• How much: free, but must provide own transportation

Come Saturday, Nov. 8, Davies will take on the role of game master, with the entire city of Albany serving as the game board, as the library launches its first ever Albany History Race.

“I’ve done some gaming events here and there,” said Davies, describing his efforts to introduce new patrons to the library and its variety of materials. “When I took over the role in February, not everyone was aware of the Pruyn Collection.”

The Pruyn Collection consists of books, pamphlets, clippings, newspapers, post cards and photographs of Albany County’s past. The lives of past citizens can be uncovered through city directories, census records and newspapers. Some of the material also relates to neighboring communities in the Capital District.

The library’s effort to preserve and illustrate the storied history of Albany has included several outreach programs. There is the initiative to collect local yearbooks, which ultimately aid patrons with genealogy research. The introduction to “The Story of My House” program educates residents on how to research the stories behind their own homes. And, there’s even a mobile app that was developed by Troy Web Consulting and the Historic Albany Foundation, which enables people to conduct their own walking tours of Albany’s amazing architecture.

The Albany History Race is loosely modeled after CBS television’s “The Amazing Race,” which pits teams against one another to solve puzzles and overcome challenges in a race across the globe. In this local version, history buffs can test their knowledge as they sprint around Albany.

On Saturday afternoon, participants will arrive at the library’s main location at 161 Washington Ave., where they will be given clues they will need to investigate using the Pruyn Collection. The clues will direct the gamers to eight locations throughout the city. They will then be given a short amount of time to plot the quickest route to visit all of them before they set out on the race.

Teams of four people will need their own vehicle for transpiration. Each team must also have a digital camera (or camera phone), to record proof of their visit to each site. Once all the tasks are completed, it’s a race to the finish line at McGeary’s Pub at 4 Clinton Square.

Each team is promised a 20 percent discount on food and drinks for the day. The top three teams will receive bragging rights and additional prizes.

Those interested in playing must first register at [email protected], or call 427-4376. The race starts Saturday, Nov. 8, at 1 p.m., at the library’s main location on Washington Avenue.

District given food for thought