On the laugh track 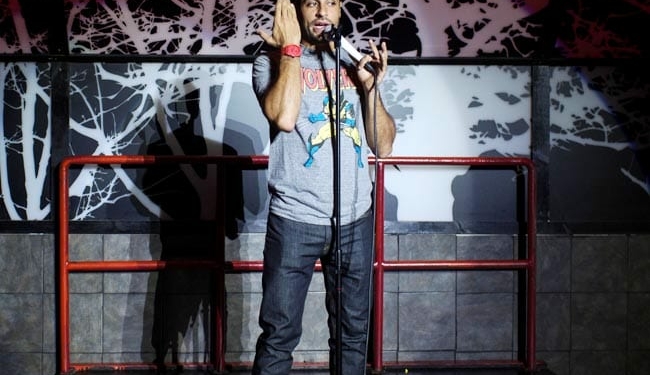 Dan Frigolette was a Syracuse undergrad studying journalism before he started on a career path in stand-up comedy.

“I was a sophomore in college and with my first-ever girlfriend,” recalled Frigolette. “We were in the middle of a break-up, at the point of saying mean things about one another. I was like, whoa. Whoa. I still like you. We had a lot of good times together. We shared a lot of laughs. Can’t we still be friends? And, then she said, ‘You never made me laugh.’ It was at that moment, I never realized how important it was for me to be funny.”

The Schenectady-born comic has since steadily made a name for himself, taking the stage but a handful of times before moving to New York City and then ultimately Hoboken, N.J.

“Once I tell people I live in Jersey, I spend the rest of my time apologizing,” he quips.

But, his love for Hoboken sparked the catalyst for a program to coax residents of the city to turn away from the bright lights of New York City and seek entertainment in their own hometown. Now, in addition to his job title as comedian, Frigolette is the creator of the Hoboken Comedy Festival, Comedy’s Best Kept Secret Tour and NJFunnyfest.

There is a new Golden Age for comedians today, much as it once was in the 1980s, said Frigolette. Whether by means of the Internet or the numerous talent shows on television, the funny man has seen peers garner television contracts after “two or three shows.”

But, he said, the first step toward success in the industry starts before a chance meeting.

“Initially, it’s not what other people think of you,” said Frigolette. “It’s about getting on stage and loving it. That dream doesn’t start until you step up on that stage.”

Frigolette’s latest endeavor, “Make Me Laugh,” brings him back to the Capital District in an effort to help local comedians get that start.

“There is a supportive environment in Albany,” said Frigolette. “But, for comedians who are not in New York, L.A. or Chicago – you may only have one opportunity. It’s important to give young people the opportunities to perform stand up and support that burgeoning desire to perform. Surprisingly, the further from a gigantic metropolitan area you travel, the more sparing stand-up comedy opportunities become.”

“Make Me Laugh: Albany” is looking for the funniest amateur comedians in the Capital District. The contest will offer upcoming talent performance opportunities all throughout the Northeast during the first two weeks of November.

The finalist will be showered with industry tools and a handful of opportunities to launch his or her career — free headshots from Chris Langston Photography, a feature in the Albany Times Union, an interview on “Alternative To Sleeping with Ethan Ullman,” and a write-up in the Metroland. The winner is also promised two paid performances on Comedy’s Best Kept Secret Tour on Nov. 15 and Dec. 27 at Proctors in Schenectady, and more paid performances at the 2015 Hoboken Comedy Festival and 2015 NJFunnyfest.

Prospective performers can submit online at www.LaughAlbany.com to have the opportunity to perform throughout the event. “Make Me Laugh” hopes to hold several rounds of auditions at local venues, colleges and universities in the Albany and surrounding areas.

SUNY Albany and the College of St. Rose have already committed to hosting auditions on Tuesday, Nov. 4, and Wednesday, Nov. 5, respectively. Aspiring comics are encouraged to “just show up,” said Frigolette.

Those performers who shine through the audition and online submission processes will be asked to perform in the semi-finals of the competition held over two rounds at Troy’s Arts Center of the Capital Region on Nov. 8 at 8 p.m. and 10 p.m. There, they will be judged by a panel of industry professionals.  Judges for the semi-finals include Kareem Green, Hoboken Comedy Festival Single Night Winner; Steve Barnes, Albany Times Union entertainment reporter; “Jeff the Drunk” from The Howard Stern Show; radio host Ethan Ullman; and Frigolette himself.

Finalists will subsequently perform at the “Make Me Laugh” finals at the WAMC Linda Theatre on Nov. 15 at 6 p.m. Barnes, Jeff the Drunk, and Frigolette will be joined by BET’s Simeon Goodson, comedian Matt Richards and Metroland entertainment writer Ali Hibbs.

The deadline to submit is Nov. 1. For more information, please visit www.AlbanyLaugh.com.