by Michael Hallisey
in The Spot
Reading Time: 6 mins read 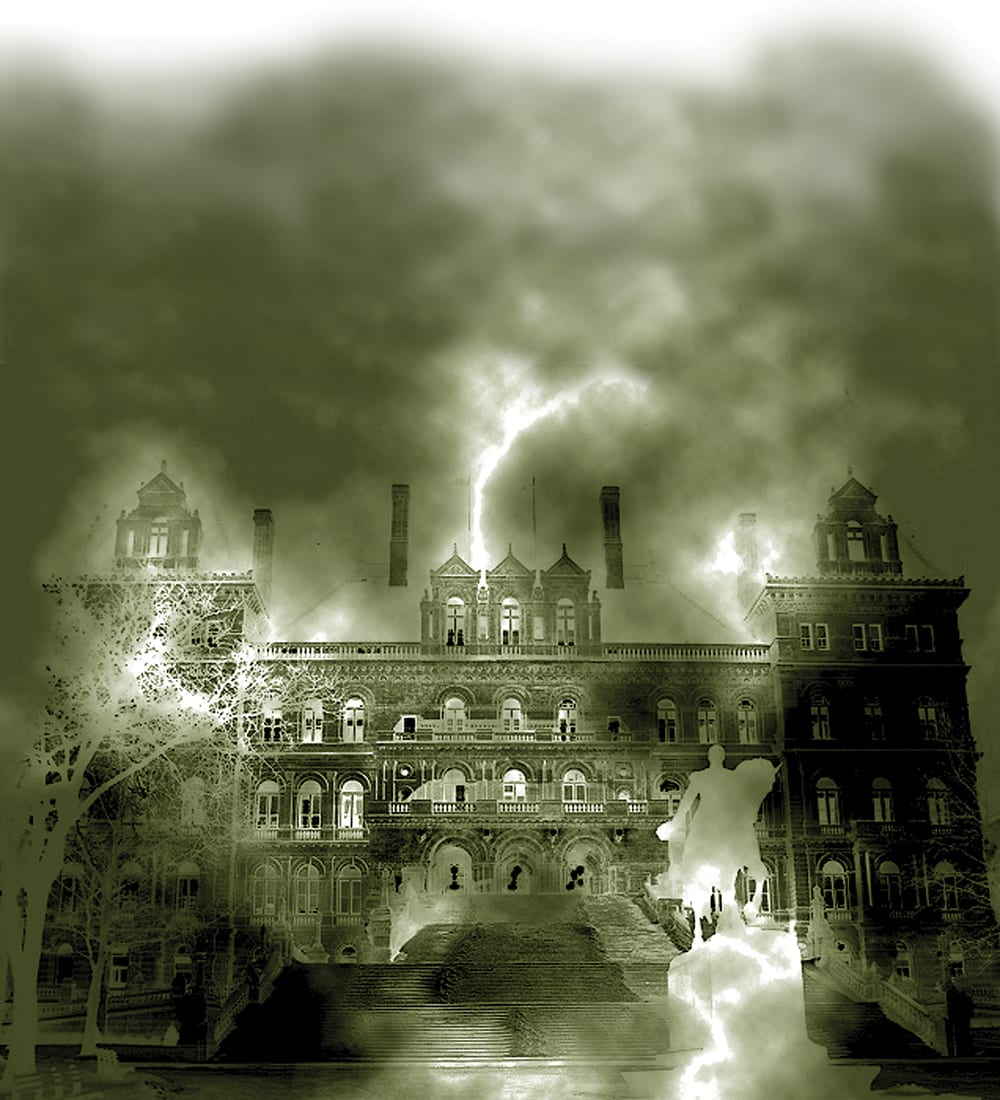 Deep within the basement of Proctors in Schenectady, Greg Rubusto and his Tri-City New York Paranormal Society team were investigating what many had already suspected of the 88-year old vaudeville house: that it’s haunted.

“Humans are fascinated with death,” said Rubusto, who founded the paranormal society five years ago. “People are compelled to be scared.”

He said his own fascination with death started when he witnessed the passing of his grandmother when he was 8. For more than 20 years, he has educated himself on the paranormal. By definition, paranormal is “seemingly outside normal sensory channels.” But, it is most commonly associated with ghosts.

Rubusto emphasizes the primary goal of every investigation is to debunk any perception of spirit activity. After all, that bump in the night is more likely to be the home furnace kicking on than it is to be Casper.

But, then, there are investigations like the one at Proctors.

The paranormal society was invited to the theater on the suspicion that the historic building was haunted. The basement was of particular interest, he said. So, when theater officials left them to investigate throughout the night, he and his crew made for the bottom floor. They went down the old service elevator. They pushed through a heavy iron door, propping it open by means of a 25-pound brick, and proceeded to a corridor underneath State Street.

Rubusto employs a team of nine other investigators, using sophisticated equipment that includes an electromagnetic field (EMF) meter, a four-track digital recorder, and a high-definition video recorder. He explains the common belief that spirits can influence the electricity in the atmosphere. The EMF meters can be used to detect such differences. When there are drastic shifts of EMF, a light atop of the meter turns red, indicating the possible presence of a ghost. A recording device is often used to detect what is known as an Electronic Voice Phenomenon (EVP). It can pick up sounds that the human ear may not hear, such as the faint sound of a distant voice.

Almost immediately after establishing camp at Proctors, Rubusto spoke out into the emptiness of the underground corridor. The EMF meter began to spike, and the team continued to walk through the corridor, asking questions along the way. Each time, the red light atop of the meter blinked red in response. At one point, Rubusto recalled, he told his group that he felt the air was “heavy.” As soon as he said this, a loud bang was heard out from the distance, and his assistant’s video recorder immediately turned off.

The camera never turned off before, said Rubusto, and the loud bang could not come from the streets above. The rest of the team, who was upstairs within the theater, could not access the area as the elevator car was at the basement. As he attempted to radio his findings to those upstairs, he learned his radio could not reach them. Deciding to go back up, Rubusto and his team found the iron door all but closed. The heavy brick that once propped it open had been moved, not by the weight of the door because the brick was positioned on the opposite side, behind the door.

“If the door closed, we wouldn’t have been able to get out,” he said. “Someone wanted us to stay down there.”

Rubusto said that ever since he was 15 years old and venturing alone to abandoned buildings to record EVPs on an old tape recorder, nothing scared him more than that encounter at Proctors.

And, on Halloween this year, he and his crew go back to Proctors to do it again.

For centuries, Halloween has been the night to converse with the dead, leading no one to doubt it to be the best night to seek out the most thrilling, haunted jaunts in town.

There are plenty of events to satisfy your fancy for the ghoulish throughout the Capital District. But, before you commit to any one of the events listed below, perhaps it is best you understand just why Halloween is, in fact, the one night to seek out the dead.

Rubusto said that Halloween is deeply rooted in pagan beliefs, where the day signifies the end of the harvest season and the coming of the new year. Pagans see Halloween (or Samhain) as the night to remember, and speak to, the dead. Samhain is the time of year when the veil between the world of the living and the world of the dead is at its weakest.

Other imagery associated with Halloween references pagan stories and rituals; from jack-o’-lanterns, to pictures of the moon, to dressing up as the witches who – among others — followed the ancient, nature-based religion. As Christianity spread throughout the Gaelic nations of present-day Scotland and Ireland, the old stories associated with paganism were demonized to persuade followers to convert.

But, people kept going back to the old traditions, and Samhain ultimately turned to Halloween.

“Why do we do that?” asked Rubusto. He answers by saying Halloween is a time for re-birth for some. For others, it allows them to dress up and be someone different for a day And, yet for others, there are those who are following through on a on what Rubusto calls a “Psudeo-Science,” to investigate the last unknown. “We all die, so we try to contact with the dead,” said Rubusto. “We have a fascination for the dead.”

Monday through Friday, 12:30 p.m. to 5:30 p.m. throughout OctoberJoin the “ghost hunting” Capitol Tour Guides as they take you through the “hot spots” of the Capitol. Brave visitors will make their way to the exact spot where Samuel Abbott, the Capitol’s night watchman died in the Capitol fire of 1911. Then they will explore the legend of the “Secret Demon” near the Great Western Staircase. Find out which two US Presidents visited the Capitol after they died and learn about the state Assembly Chamber’s secret, hidden murals, and the tormented artist who created them.

The original Albany Ghost Tour is back for its seventh season. From Ten Broeck Mansion to the State Capitol and Graceland Cemetery, the tour promises to introduce tales of Albany’s most famous apparitions. Tickets are $30 per person. Pick up and drop off location is Dutch Apple Cruises: 141 Broadway, Albany (free parking lot on site). Go to www.dutchapplecruises.com to purchase tickets or call (518) 463-0220 for more information.

Children are invited to the Monster Mash and Bash. Enjoy face painting and take-home crafts, and wear costumes for the spirited holiday parade. Visit www.nysm.nysed.gov for details.

The annual Howl Prowl will begin inside the Discovery Center with hands-on exploration of Halloween topics such as skulls, bats, spiders, night-time sounds, and continue outside for a hike to discover the Pine Bush at night, concluding the evening with savory sweets of cider and doughnuts. For more information, go to www.albanypinebush.org.

Experience the thrill of the Howe Haunted Lantern Tour and explore the mysteries of the Woman in White, the Flood of 1928, Christina and other legends while a ghost hosts leads a special, two-hour lantern tour. Visit www.howecaverns.com for more information.

• Knick at Night at the Knickerbocker Mansion

Featuring candlelight visits with Ghosts from Old Schaghticoke at the “haunted” 18th Century Mansion. Visit knickmansion.com for information and prices.

The tour takes you on a spine-tingling journey through places in the historic theater that few dare to go. Explore creaky backstage hallways, haunted dressing rooms and eerie balcony boxes while hearing firsthand accounts and tales of ghostly haunting. Visit www.proctors.org for more details.

Captain Youth and Family Services in Clifton Park is offering a haunted hay ride at Riverview Orchards in Rexford for children of all ages. The cost is $10 a person, or $5 for children 12-years old and younger. For more details, visit www.captaincares.org or call (518) 371-1185,

A staple event for this time of year, Double M continues their Halloween tradition of scaring the people of the Capital District. Reservations are required, and it is recommended that no children under 8 attend. Visit doublemhauntedhayrides.com for details.