A cider a day

by Billy DeLap
in The Spot
Reading Time: 3 mins read 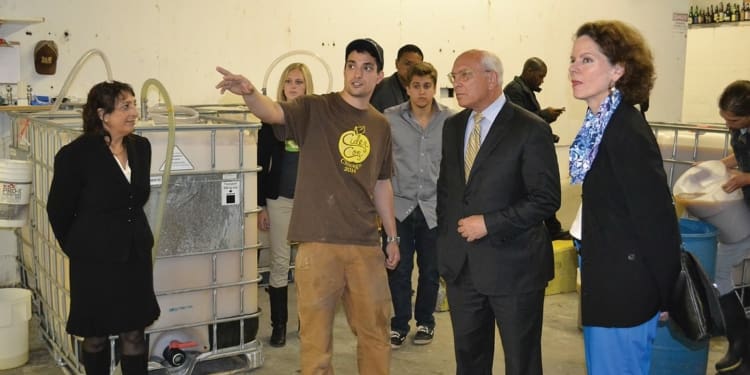 The Farm Cideries Bill, which took effect in January 2013, made it possible for Alejandro del Peral to produce and sell cider in downtown Albany and also have a tasting room. The bill helps brewers and farmers.

“What we do routinely, every time I’m home, is tour small businesses and manufacturers so as to understand what their needs are and what their strengths are to the region. There are all these wonderful surprises that alert us to great things happening in the congressional region and the Capital District,” said Tonko.

Under the law, cideries have to either be on a farm or use apples from New York State. All of the apples used to create the ciders produced at Nine Pin come from local farms and the del Peral’s own family orchard. The main source of apples is Samascott Orchard, with other apples coming from Indian Ladder Farms and Lindsey’s Orchard. This has created an increase in business for apple orchards in the area, due to the type of apple used.

“There are certain types of apples. There are Grade A, which are the perfect apples that you see in supermarket sales, and the second apples drop … are labeled Grade B,” said del Peral.

The Grade A apples are what the orchards make their money off of, said del Peral. Roughly 10 percent of the apples are Grade A. Also called “seconds,” the remaining apples can be used for sweet ciders or pies, but for the most part orchards are barely able to make money off them.

“Previously, they were selling that fruit to minimize loss, or they sell to large companies for juice. Because we run a process where we make even more money off the juice, we pay the orchards so they are making money on their seconds,” said del Peral. “It works all the way down to the agricultural level.”

As a member of the state legislature’s environmental committee and as an assemblywoman, Fahy has cosponsored amendments to this bill and is also working to get legislation passed that will remove a wine tax for beverages that are above 7 percent alcohol by volume.

“I just love that you are taking apples that really would not make it to market otherwise. Talk about recycle, reuse. This is the type of creativity that is keeping local farmers going, especially small farms,” said Fahy.

The local connection goes even further with local businesses helping each other out. Nine Pin beverages can be found at over 200 different establishments across the state, as well as at bars and restaurants across the Capital District. In it’s first year of production, the cidery produced 27,000 gallons of cider and expects to surpass that this year.

The business is owned and operated by the del Perals, who have lived in Ghent for years. While Alejandro is the brains behind the different ciders and ensures they are of the highest quality, his mother, Sonya, works on the administrative side of the business, while his father, Casiano, designed and built the tasting room. Casiano also painted a rose on the building 15 years ago for a previous owner.

Another tie to the area comes in name of the company, which pays homage to the Washington Irving story “Rip Van Winkle.” In the years before the American Revolution, Van Winkle lived in a village in the Catskills. He wandered off and ended up playing a game called Nine Pin while drinking a mysterious beverage. He passed out and fell asleep for 20 years. Hard cider was popular at the time, and the del Peral family imagines it could have been the mysterious beverage.

Continuing to dance the night away