Troy is set to chow(der) down

by Billy DeLap
in The Spot
0 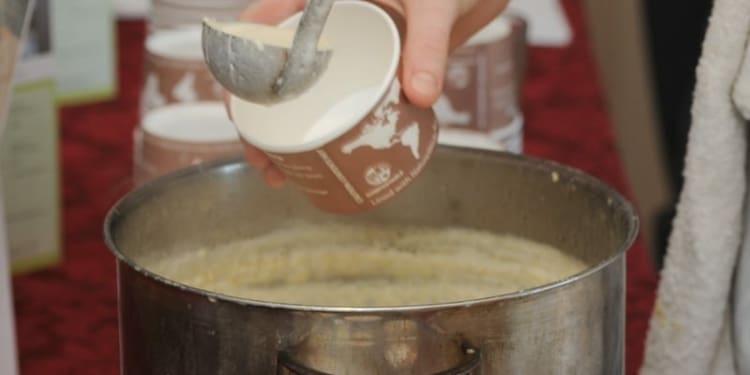 The seventh annual Troy Chowderfest will be held in Riverfront Park in Downtown Troy, Sunday, Oct. 13. This year, there will be 17 local restaurants in attendance, competing for a variety of awards, in a day full of food, fun and music.

A new aspect of the Chowderfest this year is that many of the local shops throughout downtown Troy will be holding sidewalk sales during the event itself.

“Festival guests are encouraged to come to Riverfront Park, sample chowder and then walk off the calories by browsing around downtown,” said Director of the Downtown Troy Business Improvement District and festival coordinator Elizabeth Young

Chef Ryan Huneau, from Treviso by Mallozzi’s and two-time winner of the top honor as the judges’ pick, is looking to continue his winning streak this year.

“The customers have been coming in asking us for our Autumn Pear Chowder already,” Huneau said.

He doesn’t plan on changing anything and will be competing with his award-winning chowder again this year. Though chowder has been a hit, he arrived at it by coincidence.

“We had a bunch of pears come in fresh and we said, ‘Let’s go sweet,’” Huneau said.

Young said that if Treviso wins again, she’s thinking of making a rule that you can’t use the same chowder 3 years in a row, adding, “I will admit, it is fantastic.”

Larry Schepici, chef at Jack’s Oyster House located on State Street in Albany, is a Troy resident and one of the founders of Chowderfest. Schepici, who has been a chef for 30 years and is originally from Boston, began the event by going from restaurant to restaurant in Troy and asking the owners if they wanted to compete.

Last year, Jack’s Oyster House won the “People’s Choice Award” with a Cape Cod boat chowder. Now Schepici says he has to make 30 gallons of the soup at a time because it is so popular.

This year, 22 different chowders will be competing for best overall, most creative, best seafood and best vegetarian soup, awards that will be handed out by a panel of four secret, local restaurant critics. Festival goers will be able to pick their favorite creations for the People’s Choice Award.

For the first time, there will be a dessert chowder from Sweet Sues, located on River Street in Troy. Chef Susan Dunckel created a S’mores Chowder, which could be a real contender for the most creative award.

The competition is expanding, with a number of restaurants competing for the first time. Carmen’s Café, Finnbar’s Pub, Mio Vino, Sweet Sues and The Ruck are all making their Chowderfest debuts.

The event kicks off at 10 a.m. and officially runs until 4 p.m. but organizers said many of the vendors run out of samples by 3. Tickets for samples are $1, and 20,000 samples will be served up during the event.

Aside from the chowder, there will be live music all day and a bouncy bounce for the kids. Performing live will be Erin Harkes, The Standard Clams and The Refrigerators. The event is sponsored by the City of Troy and many local restaurants, and proceeds will go to the Troy BID.

Smokey Bear drops in at the Pine Bush