by Marcy Velte
in The Spot
Reading Time: 3 mins read 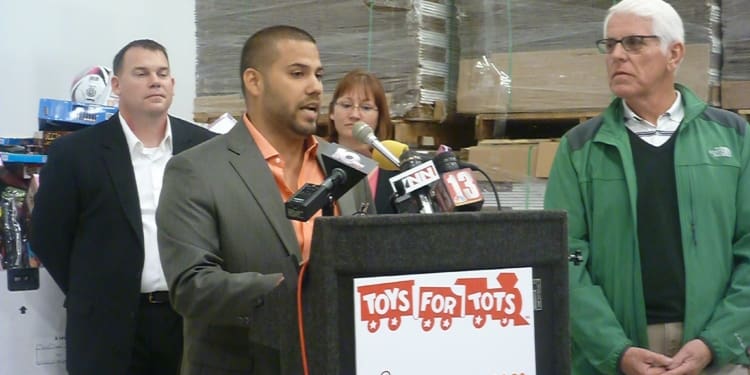 The local Toys for Tots program kicked off its holiday campaign more than a month early this year. Representatives of the Marine Corps Reserves’ Dunkin’ Donuts Toys for Tots Train made the announcements on Friday, Oct. 4, at Integra Networks on the grounds of Albany International Airport.

This year’s initiative is beginning earlier than usual in order to help more Capital District children have a merry Christmas. Last year, the campaign kicked off at the end of October.

“This is a milestone year for us,” said Sgt. Albert Roman, a retired U.S. Marine and local Toys for Tots campaign coordinator. “The Toys for Tots train marks its 15th anniversary. … Dunkin’ Donuts saved the train from derailment in 2009 and has been a wonderful partner ever since.”

This is the fifth year Dunkin’ Donuts has donated money to the holiday campaign to keep the train on schedule. This year, $30,000 from the company and franchise owners is being given to bring the five-year total to $140,000. Canadian Pacific and Amtrak will operate the train and travel to 12 communities throughout the state.

“Dunkin’ Donuts is honored to help keep this outstanding initiative on track,” said Eric Stensland, field marketing manager for Dunkin’ Donuts. “Our Capital Region franchisees are grateful for the work of the dedicated Marines who bring so much joy to so many children.”

New, unwrapped toys can be dropped off at more than 400 locations throughout the Capital District, along with more than 100 Dunkin’ Donuts stores. Winter coats will also be collected as a component of the drive.

This year, volunteers are hoping that by starting early, they can achieve a 25 percent increase in donations. That would mean a total of 200,000 children in the area would be given toys this holiday season who otherwise wouldn’t have.

The campaign was given additional support by this year by several local Walmarts and Integra Networks. Wal-Mart not only presented a monetary donation of $20,000 for the third year in a row, but also sent a truck filled with $24,000 worth of toys to begin this year’s toy drive.

Roman said this year’s drive presented new challenges because with a bigger goal for collecting toys, more space was needed to house them until December. It was then that Integra Networks President David Prescott stepped in.

Prescott said the campaign is dear to him and he was glad to help out in any way he could.

Prescott said he felt he should return the favor, “with all of the Toys for Tots donations I’ve done over the years, and dropping toys off on them unannounced in garbage bags.”

Integra Networks is not only donating the use of its warehouse for the entirety of the toy drive, but also donated an additional $20,000.

“This is really what it’s all about, it’s for the kids,” he said.

Prescott also commended Roman for his hard work with the local Toys for Tots campaign. Roman now works for Integra Networks. Prescott, a Navy veteran, said he witnessed Roman’s hard work and dedication during the toy drive and he thought those same qualities would mesh well with the Integra Networks team.

Other local companies like Friehofer’s, Keeler Motor Car Company and Sondra’s Fine Jewelry also gave donations and will serve as drop off locations for the campaign. The kick off event ended with all of the gathered volunteers unloading the first truck full of gifts donated by Wal-Mart.

Additional volunteers are being sought to help organize and unload toys at the warehouse, since there are often more volunteers than needed on board the train each year. Roman said he would like to see some more local military retirees lend a hand.

The Toys for Tots train will begin its 2013 run on Saturday, Dec. 7, in Binghamton and make regional stops in Oneonta, Cobleskill and Delanson. The following day, it will travel from Albany to Rouse Point with stops in Mechanicville, Saratoga and Whitehall.

Roman thanked the community for its continued support of the Toys for Tots program and said he hopes it would remain an annual tradition for years to come.

For information on drop box locations, to host a drop box, hold an event, raise donations or to volunteer, visit the Toys for Tots website at toysfortots.org. Non-profit groups can also request toys through the local campaign page.

Passive park in Colonie now open for public use