Pastor’s calling brings her to Delmar

by Marcy Velte
in The Spot
Reading Time: 2 mins read 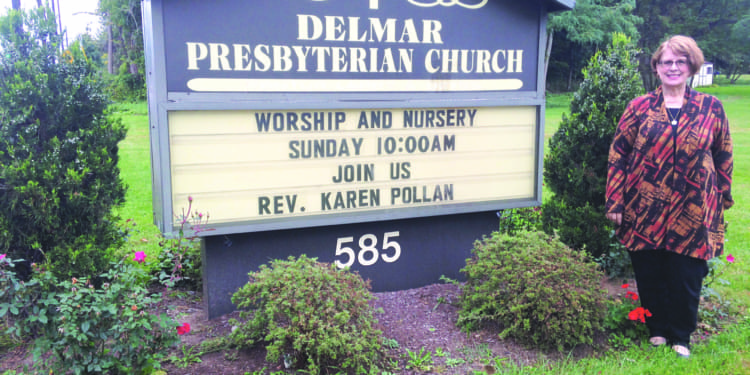 For only the third time in 57 years, Delmar Presbyterian Church is welcoming a new pastor.

The Rev. Karen Pollan became the church’s new, permanent pastor on Sunday, Sept. 8. She moved to the Capital District from Salem, Ore., where she served as associate pastor of the First Presbyterian Church of Salem for the past 12 years.

Pollan said she was first interviewed for the position in April, and was called back by the presbytery in May before being accepted by the church’s congregation. She said the process is almost like online dating in that new pastors have to fill out a personal information form in response to presbytery pastor requests that are placed on the denomination’s website.

“Something attracted me to New York, and I emailed them back saying God is calling us to work together,” said Pollan.

The pastor said she was attracted to Delmar Presbyterian because she liked how open and welcoming the congregation is to all members of the public.

“They also have a string interest and involvement with local mission work,” she said. “They’ve made the strong decision to be a positive force in their community, and a high percentage of the congregation is involved with mission work on a weekly basis.”

Pollan said she likes it when members of her church are willing to get involved.

“I’m not interested in those who just sit in the pews and feel they’ve fulfilled their spiritual obligations for the week,” she said. “This is a group of people very engaged in advocacy. About 75 percent are involved in mission work each week.”

Pollan attended Austin Presbyterian Theological School in Austin, Texas, and later served as pastor of the First Presbyterian Church of Sulphur Springs. She them moved on to Oregon. Pollan is filling the position left by Rev. Tom O’Donnell.

Pollan said she has no set goals for her new church because they are already so active.

“God doesn’t live in the church, but all around us outside,” she said. “My plan is to be a partner with the church government. We need to be looking for the places God is already at work and strengthen the things already happening. The hard part is I don’t know what that is or what it looks like. We just need to be aware.”

Pollan said she is humbled to have come to such a close-knit church community. She said the fact the congregation has only had two past pastors was another big draw.

“It means they don’t chew up and spit out pastors,” she said. “It’s also a bit intimidating because the congregation had nothing but high regards for the previous pastor.”

Pollan said it is comforting to know Delmar Presbyterian is a congregation that has valued and nurtured its pastor relationships, but she also feels she has big shoes to fill.

The pumpkins roll in