by Rob Jonas
in The Spot
Reading Time: 3 mins read 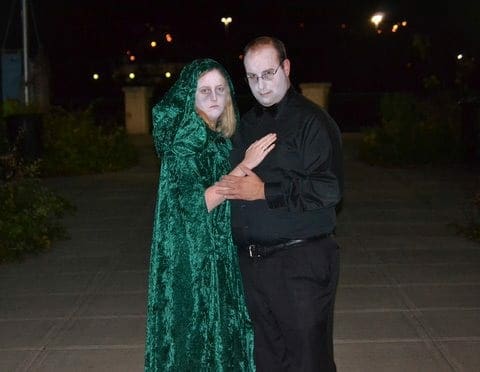 The 90-minute evening trolley tour of downtown Albany begins Thursday, Oct. 3, and continues through Wednesday, Oct. 30. The tour starts at 7 p.m. at the Ten Broeck Mansion and makes stops at Graceland Cemetery and the state capitol building. Other sites along the tour include the Empire State Plaza, the Cathedral of the Immaculate Conception and the Department of Education building.

As the trip progresses, tour guide and co-organizer Maeve McEneny will tell stories about ghostly encounters in the city, including one her father, Albany historian and former state assemblyman Jack McEneny, told her about a particular picture in the Ten Broeck Mansion – the man with the billy goat beard.

“One day, a psychic came to the mansion and asked to take a tour of the mansion,” said Maeve McEneny. “Since it was a slow day, they allowed the psychic to tour the mansion. When the psychic went into the attic, the psychic found the picture of the man with the billy goat beard in storage. The psychic said, ‘This is the angry spirit I’ve been feeling. This (picture) doesn’t belong up here. It belongs downstairs.’”

The tour is run by Harmony House Tours, and there will be some additional support this year from the Tri-City Paranormal Society, a team of professional investigators who examine supernatural activities in the Capital District. The Tri-City Paranormal Society will join the tour for socials on Friday, Oct. 11, Friday, Oct. 18, and Wednesday, Oct. 30, to demonstrate their equipment and talk about some of the paranormal cases they have investigated.

“They (the tour organizers) came to one of our reveals at the Ten Broeck Mansion a few years ago,” said Tri-City Paranormal Society founder Gary Robusto. “We were showing evidence to the public for a fundraiser, and they came to see our presentation. We have always wanted to work with them and collaborate ideas with this organization, and now that we have set events for the month of October we are really excited at this opportunity to work with such great people and a great organization.”

McEneny thinks it will add an interesting dimension to the regular tour.

“They have these gadgets that they say can pick up the presence of the ghosts,” she said.

McEneny said the presence of older buildings in the city add to the ghost tour’s visual experience.

“There’s still so much here in the city from its history,” said McEneny. “We can take a walk through the Center Square neighborhood, and people can look around and have an idea what the city looked like back then.”

Two historic locations around Albany will highlight the story of Hattie the Hitchhiker. McEneny said the story that starts when a man picked up a young woman walking near Graceland Cemetery on Delaware Avenue one rainy night and took her to her home at the corner of Madison Avenue and Lark Street, which is now Justin’s restaurant. When he went back to the house the next day, an older woman answered the door and told him Hattie had died several years ago. So he went to the cemetery and found his coat draped over her gravestone.

“We can go to Graceland Cemetery, we can go to Justin’s and we can follow the path that man took,” said McEneny.

Local actors will also be scattered throughout the tour to help tell the stories McEneny learned as a child from her father that put Albany’s history in a different light.

“Using these ghost stories were a way to open up the history of these historic sites,” said McEneny.

The Original Albany Ghost Tour runs Thursdays through Sundays in October, and all of the week leading up to Halloween. The cost is $30 per person, and the three paranormal socials are an additional $10. Space is limited, but McEneny said she encourages people to call as more 26-seat trolleys can be added to tours.

“We do book up, but we love accommodating as many people as we can. So, don’t be shy about calling us,” said McEneny.

For more information and reservations, call 238-2233 or email [email protected]