Down the rabbit hole

by Charles Wiff
in The Spot
Reading Time: 3 mins read 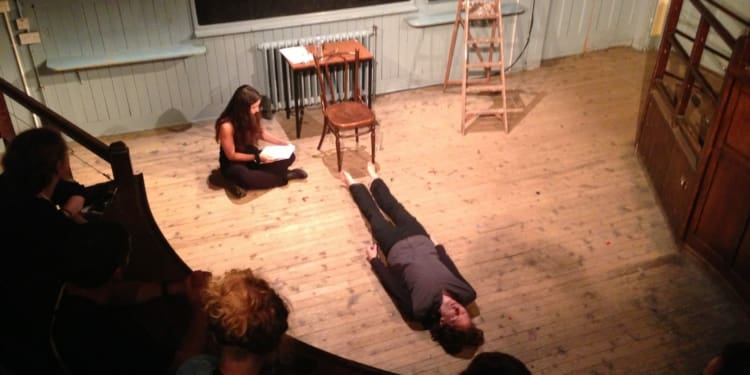 When the curtain goes up on most plays, it’s the culmination of weeks of behind-the-scenes action – auditions, rehearsals, costuming and set making. With “White Rabbit, Red Rabbit,” it’s quite the opposite.

The play has been performed all over the world and in 15 languages, but in each instance a different actor has staged it without a director, a set or even preparation. That will continue to be the case when the production comes to the University at Albany’s Performing Arts Center from Oct. 2 to 5 for four performances, featuring four different actors. They’ve all been asked to refrain from even researching the play, and will be handed the script as they step on to the stage.

“I got myself the script and read the script, and that’s when I said to myself, ‘This just has to be done here.’ …

I felt compelled to have it here,” said Assistant Director of the UAlbany Performing Arts Center Kim Engel. “I think that it’s exciting for the actor and the audience to discover this together.”

The never-the-same, off-the-cuff approach to performing the play doesn’t mean its creation was thoughtless. Playwright Nassim Soleimanpour’s story is as unlikely as it is unconventional. He put pen to paper in 2010 but never saw the play performed until this year, because Soleimanpour was confined to his native Iran as a conscientious objector to the country’s mandatory military service.

Putting a play of this nature onto the stage absent the playwright was a statement in its own right, and the need to send it abroad was reflective of Iran’s cultural censorship. Audiences were encouraged to email the playwright notes during the performances.

The play itself features animal characters that serve as metaphorical devices, and it is heavily influenced by the events and aftermath of the Iran-Iraq War. It also features some audience participation, making it even less likely one performance will mirror another.

“I think that the content, the message, is very important and very timely, especially with what’s going on and continuing to go on in that area of the world right now,” Engel said. “He is challenging people to think, and to question, and I think that’s good.”

Soleimanpour was granted his passport earlier this year when, during a physical, it became clear he was actually ineligible for military service. He saw “White Rabbit, Red Rabbit” performed for the first time in Brisbane, Australia.

The play still calls for an empty seat to be left for the playwright at each performance, and evidently Soleimanpour has shown up to performances unannounced this year and sat down to take it in.

In keeping with the play’s tradition, four area actors will take the stage for just as many performances. Chad Larabee, a visiting assistant professor in the UAlbany Department of Theatre, will take the stage Oct. 2; NewsChannel 13 anchor and local actress Benita Zahn will appear on Oct. 3; Yvonne Perry, a freelance actress who has numerous local credits to her name and spent time on the television show “As The World Turns,” will perform Oct. 4; and professional actor and Albany High School teacher Ward Dales will round out the experience on Oct. 5.

Doing a cold read in front of a live audience presents a unique challenge, Larabee said, but it’s one he’s excited about. The actors only know they’ll be walking onto a stage with a chair and a bottle of water, and be handed an extensive monologue.

“It is exhilarating and terrifying at the same time, to really not know what you’re in store for,” Larabee said. “It’s also liberating. From the little bit I know the material is quite powerful and engrossing, that it doesn’t require more than your presence and your truth.”

One might imagine performing under such circumstances and without preparation would be restrictive, but Larabee sees it as potentially liberating.

“It forces you to approach it blindly, to really trust the playwright that he’s doing his job. … Everything’s immediate and based on what is happening on the page,” he said.