by Zan Strumfeld
in The Spot
Reading Time: 3 mins read 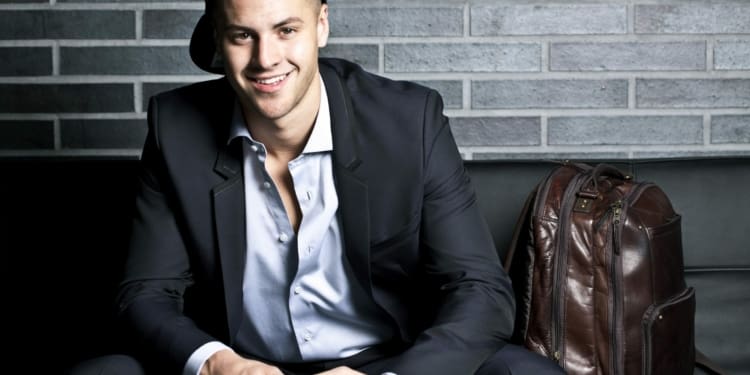 When he was a junior at Colonie Central High School in 2005, Brendan Martin didn’t get physical with the classmate who made fun of his passion. He turned it around to fuel the form of expression that was the target of the ridicule: rapping.

“The song got really big in my school. I was strategic with it. I had control over my response and planned on what I wanted to say,” said Martin, who is also known as rapper B. Martin. “I had a sense of appreciation over the fact that I can manipulate and control my words, and release them how I want, instead of saying the wrong thing at the wrong time.”

Four years later, which studying business and Spanish at SUNY Albany, Martin won the university’s Battle of the Bands, which eventually led him to perform with well-known hip-hoppers including J. Cole, Fabulous and Lupe Fiasco. Martin turned his words into positive messages and not too long after graduating 2010, and he showed off his skills to the entire SUNY system by writing “The SUNY Anthem,” released on YouTube on Feb. 27.

It has since racked up more than 110,000 views on the video sharing service.

Martin raps about his time at SUNY Albany, where he graduated with a 4.0 grade point average, and then voices the benefits of the SUNY system as a whole. The video, which spread quickly through Facebook and SUNY websites, features dancers sporting “SUNY” shirts surrounding Martin. Shots pan in and out between some of the system’s 64 campuses, switching to shots of SUNY students in school environments.

The rapper teamed up with the SUNY system last year to create a song with a “positive message” about the schools, Martin said. The video was shot by Christopher Romero, who filmed many of rapper 50 Cent’s music videos, and SUNY chipped in $3,000 for the production costs.

“I think it’s something that can definitely bring the campuses together. It’s a general positive message about SUNY,” Martin said.

Much of the song reflects Martin’s time at UAlbany, where he said “partied a little bit” but put himself on a “good work schedule.” One of the best opportunities he had during school, Martin said, was traveling and studying in Spain and then teaching students in Ecuador.

“SUNY was like four years of just a completely diverse experience. I wasn’t the top student in high school but I really turned it around in college,” Martin said. “I was really able to connect with professors.”

According to SUNY officials, the song will be played at SUNY’s graduations, radio stations and at sporting events.

With all of the hype from “The SUNY Anthem,” Martin is hoping his fan base will grow and he is working on several projects. He now lives in Los Angeles and said he is happy to wake up every day and work on something he’s passionate about.

“I think a lot of people have things they love and things they are good at, but it’s taking the extra step and dedicating your life to it. If you find something you’re truly passionate about, then it’ll just flow and not feel like work all of the time,” Martin said.

As for his music, he said he wants to keep the focus on being “very real, very sincere” and doesn’t believe working on “The SUNY Anthem” will take away from his own music.

“I think real music is what shines through. As long as my music is real, I’ll have that longevity,” he said. “Maybe some people will know me as the kid who did ‘The SUNY Anthem,’ but I don’t think that’ll take me away from people knowing me for my whole body of music. It’s a positive thing and something I partnered up with New York state. I feel blessed.”

Sports poll: Which girls lacrosse team has the best chance to win the Suburban Council?