Fired up over food

by Marcy Velte
in The Spot
Reading Time: 5 mins read 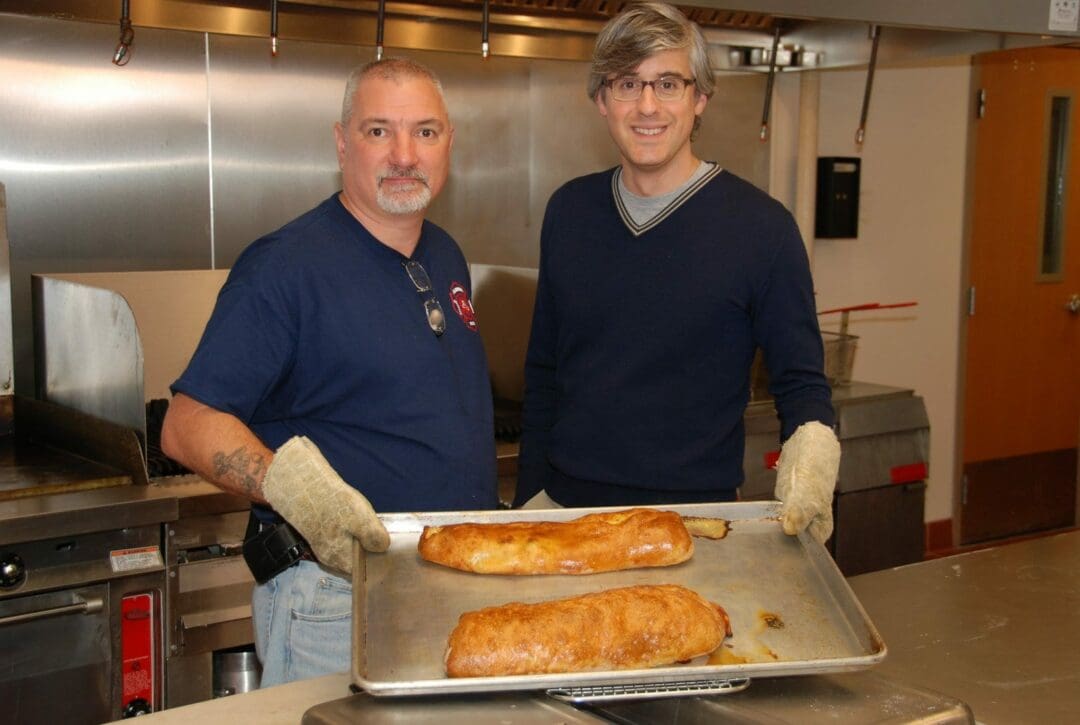 Cooking is more than a hobby for Christopher Massie — it’s a passion.

The Delmar resident began learning family recipes from his Polish grandparents as a boy. Over the years, he honed his skills to make flavorful dishes for his family and fellow Elsmere firefighters. Now a grandparent himself, Massie is hoping to keep the tradition alive with his 3-year-old grandson Bryce.

But now, he might touch even more aspiring cooks after being featured on a national cooking show. When Massie learned several months ago that the Cooking Channel was seeking grandparents to cook for a new concept show, he decided on a whim to sign up.

Months passed and finally Massie received an email asking him to come to Manhattan. And then he received a call from the network.

“I thought it was my son’s friends messing around and I hung up,” he said. “Then they called back and said they were from CBS Productions and asked me not to hang up again.

Massie was asked to go to the city for an interview on a Friday in June. He was also asked to bring several dishes for producers to try and some family photos that could potentially be used on the show. Called “My Grandmother’s Raviolis,” the show is hosted by comedian Mo Rocca. Because his grandmother died before he could learn how to make her famous raviolis, Rocca is now touring the country to learn the favorite dishes of other grandparents before it is too late.

To showcase his cooking skills but still have foods that would be tasty after a ride to Manhattan, Massie brought producers his German potato salad and a southern-style tomato pie. The interview lasted an hour and a half, and the entire time was filled with stories and laughter.

“They asked why I was smiling so much, and I told them because this was a check off my bucket list. I interviewed to be on the Cooking Channel,” he said. “They told me they hadn’t made any final decisions and I said I didn’t care.”

Just the experience was enough for Massie, but it didn’t end in Manhattan. After making special arrangements with the Elsmere Fire Department, a film crew spent three days filming at the firehouse at the end of September.

Rocca arrived with the film crew at Massie’s apartment on a Sunday night, as did friends and family members. Massie made dinner for about 30 people as everyone got to know each other. Soon, they became like a big family.

After filming Massie cook Italian garbage bread on Monday, the entire production crew followed the family bowling that night at Del Lanes. After, they all went to My Place Restaurant for drinks.

“We had tons of fun, but it was also a lot of work,” Massie said.

The next day, Massie and Rocca were filmed together at the firehouse making a ham dinner with garlic potatoes and Massie’s grandmother’s green beans. Behind the scenes, chefs replicated the dishes to Massie’s specifications for the 50 people who watched the taping live. They also made sure the food looked aesthetically pleasing for television.

“It’s a big morale booster to see one of our brothers on a cable television network and he gets to show off his excellent cooking skills,” said Kaufman. “We’re all looking forward to the show. It will be interesting to see how it is all edited together.”

Massie is already a star at the firehouse though, as dishes like his potato and leek soup and shepherd’s pie are hits with hungry firefighters.

Massie was so comfortable in front of the cameras, he pitched his own cooking show to producers focusing on firehouse food across the country.

“They told me it was a good idea and they might be in touch,” he said.

Josephine Massie said it was no surprise her husband took naturally to being on camera.

“He has a great personality and that really came through,” she said. “He gets along with everyone and loves talking to people, so I knew he would be good at it.”

Massie was just happy he could share the experience with his family.

“I spent 21 years in the military and some in special forces and I have to tell you, this was the pinnacle of my life up until this moment,” he said.

Salt and pepper to taste

Salt and pepper to taste

Heat olive oil over medium heat. Saute cutlets for 3-4 minutes per side. Set aside to cool.

To make bechamel sauce: In a medium saucepan, heat butter over medium-low heat until melted. Add the flour and stir until smooth. Over medium heat, cook until the mixture is a light, golden color.

Meanwhile, heat the milk in a separate pan but do not allow it to come to a boil. Add the milk to the mixture 1 cup at a time, whisking continuously until very smooth. Bring to a low boil and cook for 10 minutes stirring constantly. Add the cheddar and fontina cheeses and continue stirring until melted. Remove from heat. Add cayenne and black pepper. (Taste before adding the salt as the cheeses have a lot of salt in them).

Set aside to cool and thicken.

Steam the broccoli in a steamer until crisp tender. Place in an ice bath. Remove the florettes and break them up keeping them small. Julienne the stems of the broccoli.

Lay out the chicken cutlets, overlapping as a bed to prevent the cheese sauce from seeping through the bread and becoming mushy.

Spoon the broccoli and cheese mixture over the chicken bed.

Roll dough, tucking in ends as you would a burrito. Continue rolling and seal end with an egg wash. Cover entire roll with remaining egg wash.

Place on bakers rack and bake at 375 degrees for 35-40 minutes checking frequently until crust is firm and lightly browned and dough is cooked through.

Cut into 2-inch slices and serve.

Slingerlands nine was force to be reckoned with in bygone days