Town band to welcome the holidays

by Alyssa Jung
in The Spot
Reading Time: 3 mins read 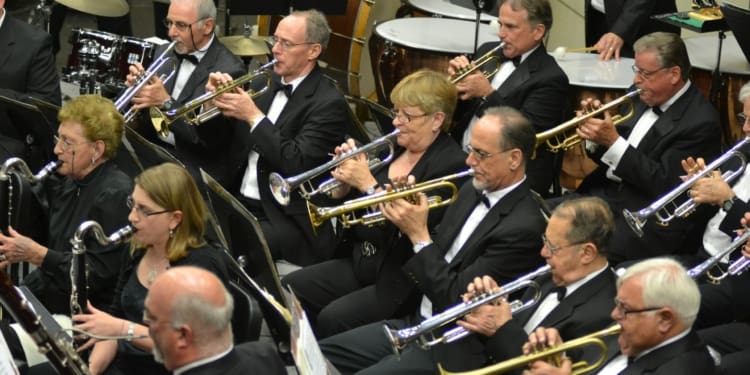 Dave Knorr isn’t one of the founding members of the Memorial Concert Band of Colonie, but he’s certainly devoted to its success.

“We do a variety of music, some of it from the traditional band literature, we do transcriptions of some orchestral classic pieces, a lot of opera pieces, anthologies of show music like Broadway and a lot of marches,” said Knorr, who plays bassoon.

The band is sponsored by the Town of Colonie Department of Parks and Recreation and the South Colonie Central School District and puts on four concerts each year at the high school. It’s in its 13th season and the name is to honor deceased South Colonie Music Department administrators and educators.

“We turn out about 250 to 300 people, sometimes less if the weather is bad, sometimes more if we get good advertisement,” said Knorr.

Knorr said he’s hoping for closer to the latter number at the Wednesday, Dec. 14, performance that will feature holiday music and end with a sing-along of Christmas Carols.

“I think people will have an excellent time, there’s some excellent music being performed, we will be performing a very difficult Christmas piece called ‘Russian Christmas Music,’” said Douglas Dougherty, conductor.

Dougherty is new to the conductor job at the Memorial Concert Band of Colonie, spending years as a trumpet player in the band before, but he’s conducted school bands and community bands in the past.

“My approach is to try to interpret the music as best I can to the musicians and rehearse the group so we can have an excellent performance,” said Dougherty, who took over duties after the band’s long-time conductor retired just short of his 88th birthday. “I’m trying to bring the band more in line with recent band literature as well as maintaining the older music that is out there for concert band.”

About 75 musicians from around the Capital District make up the Memorial Concert Band of Colonie and about 40 percent of members have been around since its inception.

This season is a “big year” for the band, said Knorr, because it’s a co-host band for the Association of Concert Bands convention in Poughkeepsie.

“It’s a national organization and they have a convention every year in different parts of the country,” said Knorr. “We will be performing down there in April. That’s a really big deal for us because we moved from being on a local Capital District stage out on to a national stand and other bands, some of the best in the country, are coming to this thing, so it’s a really exciting challenge for us.”

The band performed at another ACB convention in 2006 in Pennsylvania and has had other highlights to boast about, like its joint performance with the “Hellcats” drum and bugle corps from the U.S. Military Academy Band, a circus band performance and featured outside soloists.

Knorr has been with the band for 11 years but has been playing music “fairly continuously” since 1966 when he was in eighth grade.

“I had the choice of going into the high school band or playing bassoon and I thought, ‘That’s interesting because my father played bassoon in high school,’ so I took that on and don’t regret it for a minute,” said Knorr.

“The musicians are having a good time and we’re making a lot of good music,” said Dougherty.

The band is an asset to the town, said Alicia Osur, director of community services for the town.

“It provides an opportunity for the citizens of Colonie to have different opportunities to listen to music at no cost to them,” said Osur. “There are highly trained amateurs as well as professionals that make up the orchestra band.”

The Memorial Concert Band will present its holiday concert on Wednesday, Dec. 14, at 7:30 p.m. at the Mark Cornell Auditorium at Colonie Central High School. The event is free.