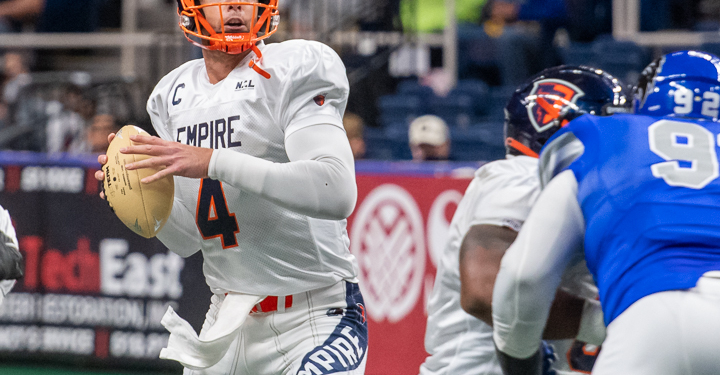 ALBANY — The Albany Empire kicked off the inaugural National Arena League football season on Saturday, May 29, with a 65-60 win over the Columbus Lions.

Receiver Darius Prince scored six touchdowns for the Empire in front of a thin but loud crowd of 2,735. Capacity at the Times Union Center was limited to under 4,000 because of COVID.

Albany quarterback Tommy Grady threw for eight touchdowns and kicker Craig Peterson made all nine extra points and added two-points to the teams tally by splitting the uprights on a kickoff. His leg proved to be the difference in the game — the Lions failed on six of nine conversions.

The NAL was founded in 2016. The Empire joined the league in 2019 after the Arena Football League, after a 32-year run, folded. That incarnation of the Empire won the last Arena Bowl, which was the last time indoor football was played at the TU Center.

The Empire will next play at New Jersey on June 4 and play at home on June 12 when it will take on the Carolina Cobras. A further easing of capacity restrictions related to COVID, and it not being a holiday weekend, should boost attendance numbers.

Click on a photo below to view a slideshow of the rest or click here to open if you are reading this in an app.

ON THE BOOKSHELF: Time to dive into summer reading