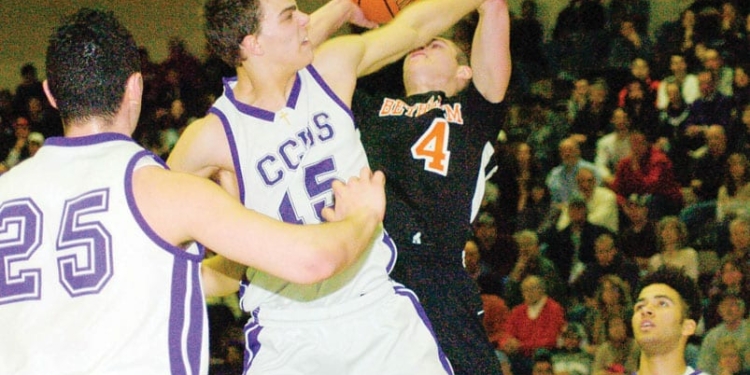 “There was some pivotal stuff that came back to haunt us … but we still got it back down to two points,” said Bethlehem coach A.G. Irons.

The key sequence happened in the final minute. John Sica made two free throws to get Bethlehem within three points of Catholic Central. The Eagles got a defensive stop at the other end of the floor and looked to close the gap even more on their next possession. However, Catholic Central forced a turnover near midcourt, and Anthony Mack finished the fast break with a slam dunk with 17.9 seconds left to put the Crusaders ahead 52-47.

“We talked about (Catholic Central’s) ball pressure and how we had to be stronger on the ball,” said Irons.

Mack was called for a technical foul for hanging on the rim after the dunk. Sica took the two free throws, but made only one of them to make the score 52-48. Ben Zonca put back a missed shot to make it a two-point game with 5.5 seconds left, but Catholic Central ran three seconds off the clock before Bethlehem could foul someone. Though Raiquis Harris missed the free throw, it proved to be enough to seal the Crusaders’ win.

Mack scored 27 points – 14 of which came in the third quarter – to lead Catholic Central to the quarterfinal win. Sica had 14 points, and Zonca added 11 points for Bethlehem.

“It’s a good experience for our underclassmen,” Irons said of Bethlehem’s playoff run, which began with a 73-68 victory over Albany Tuesday, Feb. 24. “I thought we were fairly deep (in talent) throughout the year.”