Girls basketball: The next wave rolls in 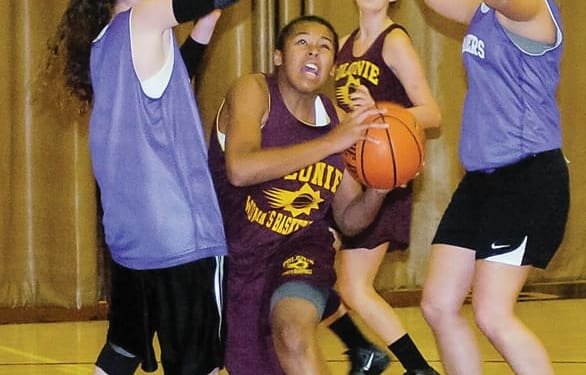 Colonie girls basketball coach Heather Fiore isn’t calling this a rebuilding season, but there are more questions than answers going into the season opener Dec. 6 home opener against Columbia.

Fiore, though, said she believes the next wave of players is ready to fill in the gaps.

“Our junior varsity team was very successful last year, and we do many of the same things at the varsity level as we do at the JV level. That way, the kids coming in are familiar with what we do,” said Fiore. “And the returning players we have all got significant playing time last year.”

Senior Nicole Riddick is the lone returning starter from last year’s team. The University of Massachusetts-Lowell-bound forward will take on a bigger role this season, said Fiore.

“We moved her into a post position last year, which she’s transitioned into well,” said Fiore. “Now, she’s come into this season focused and ready to go.”

The rest of Colonie’s starting lineup isn’t set in stone, and Fiore said that could be the case as the season begins.

Two players Fiore can see making an impact this season are senior Kelsey Shaddick and junior Aliyah Massiconi. Shaddick is one of three returning players who saw playing time off the bench, while Massiconi is part of the group coming up from JV.

“She’s very fast and likes to go to the basket,” Fiore said of Massiconi. “I see her scoring a lot of points and getting down the floor quickly.”

There won’t be much room for error for this year’s team. Playing in the Suburban Council’s South Division means two games against Bethlehem, Averill Park and Guilderland – all of which feature veteran players who have had success at the varsity level.

“The South Division is going to be extremely competitive,” said Fiore. “And even when you go outside the division, you have Shaker and Shenendehowa. So really, anything can happen.”

EDITORIAL: Happy to lend a hand